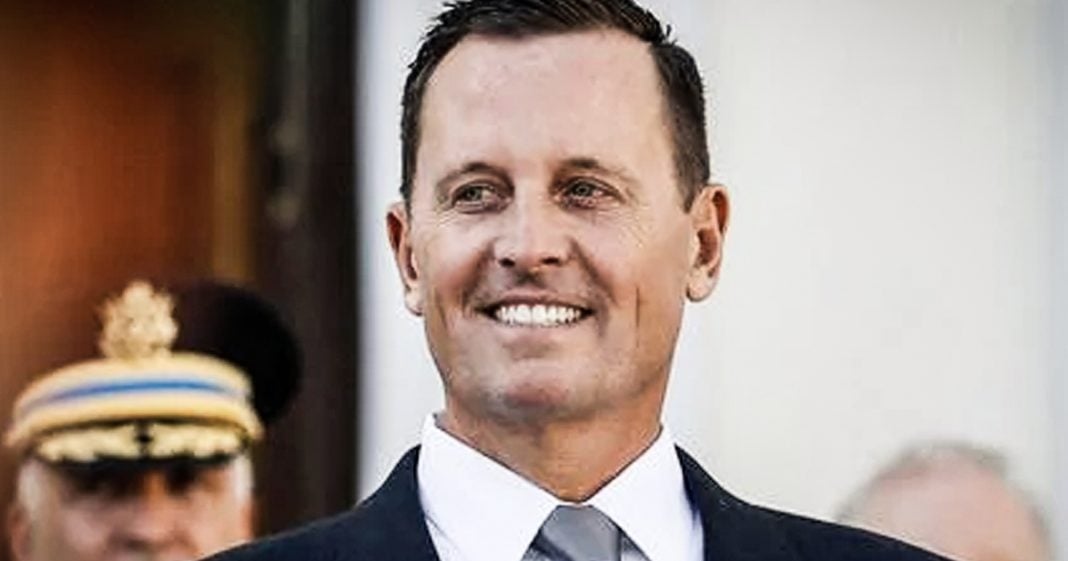 Politicians in Germany are wanting to remove Donald Trump’s ambassador to Germany, Richard Grenell, after he publicly came out and said that part of his job was to promote the conservative party in Germany. Not only are ambassadors not allowed to get involved in politics in the countries that they are sent to, but this is not Grenell’s first time meddling in the business of Germans, and now they want him gone. Ring of Fire’s Farron Cousins discusses this.

Richard Grenell, Donald Trump’s US ambassador to Germany, has once again screwed up his job and managed to offend most people in Germany. Now as you’ll recall, not that long ago, in fact it was actually less than 24 hours after the guy accepted the position of German ambassador, he tweeted out that the German people, German businesses need to immediately stop doing any kind of business with Iran because the US pulled out of the deal so everybody else needs to do what the US did. It pissed off a lot of people in Germany.

But this week, Grenell once again managed to show that, one, he’s completely incompetent and bad as his job, but, two, that he’s completely insensitive as to the workings of German politics and businesses. Because Grenell came out and said that it is his job as ambassador on behalf of Donald Trump to ensure that conservative policies and conservative politicians in Germany succeed while beating back liberalism. So now a whole lot of politicians in Germany as well as German citizens are calling for Richard Grenell to be expelled from the country. He’s doing such a bad job and offending so many people that they essentially want to kick him out of Germany, send him back to the United States, and send a big message to Donald Trump that, one, you can’t interfere with our politics, you jerk, and, two, you don’t know what you’re doing as president of the United States because that’s what this all comes back to.

Now, we have seen pretty crappy ambassadors being appointed by both Obama and Bush before him, but we have never seen the level of incompetence that we have seen from some of the people that Donald Trump has picked and Richard Grenell is exhibit A. He admitted to the German people that he wants to interfere with their politics. That he wants to make conservative politicians succeed while making liberal politicians fail. Germany has every right to expel him from their country at this point, and I believe that they should. They need to send a message to the president that you cannot send some unqualified, know-nothing ambassador over here with the expressed intent of trying to interfere with our politics. The United States wouldn’t accept it if there was a German coming to the United States to do the same, so why should the German people accept the same coming from the United States?

Donald Trump doesn’t know how to be president. He’s not smart enough, he’s not competent enough, and he’s not trustworthy enough. Now we’re starting to see that his level of incompetence is alienating some of our biggest allies on the planet.