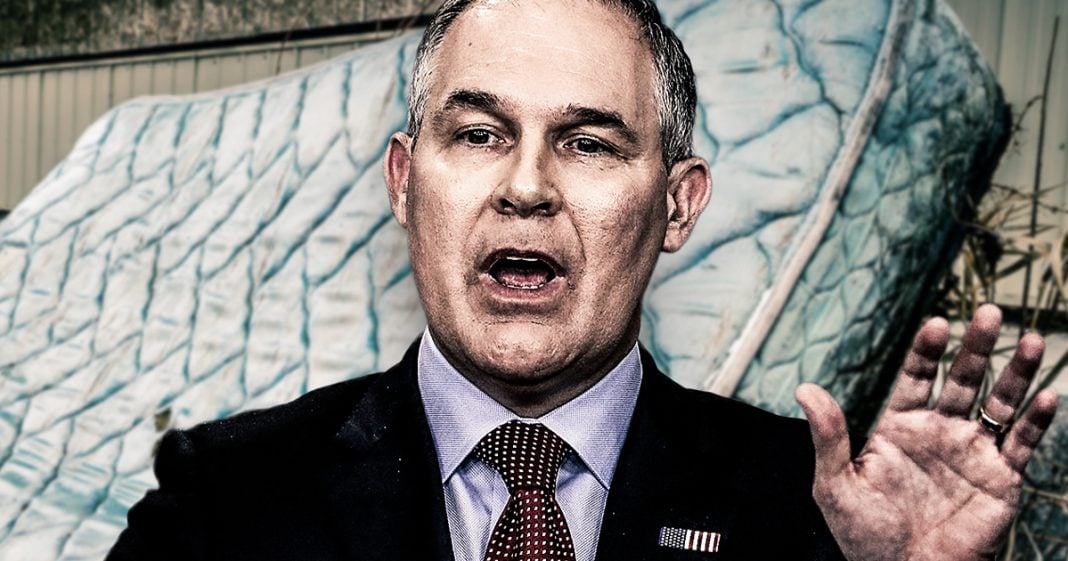 Lost in the shuffle of the nonstop scandals coming from EPA director Scott Pruitt is the fact that this man – reportedly a millionaire – wanted to buy a USED mattress from one of Donald Trump’s hotels. This story bumps his creep factor up by about 1,000 points, even when you don’t factor in that using a staff member to research how to buy the aforementioned mattress is 100% ILLEGAL. Ring of Fire’s Farron Cousins discusses this.

It’s been a hell of a couple of weeks for EPA Director Scott Pruitt. In the last two weeks alone I think we’ve had at least 10 new scandals pop up of misusing his staff, trying to get his wife a franchise at Chick-fil-A, buying hundreds of dollars worth of pens that each cost over $100 apiece, the cost of his security detail. The list is seemingly endless, and a lot of these are actually illegal activities.

We’ll get to that in a second, but I want to take a moment to talk to you about how truly disgusting Scott Pruitt truly is, because one of the stories that came out this week about Pruitt was that he had a staff member, while being paid by US taxpayers, go out and do his personal bidding, and that bidding was to look into buying a used mattress from Donald Trump’s hotel.

Now before we get into why that’s just completely disgusting, let’s take a minute to talk about this. Scott Pruitt is not like every other member of the Trump administration, or most of them. He’s not the kind of guy who has tens upon tens of millions of dollars in the bank, or even a billion dollars in the bank, as some of them do, but Scott Pruitt is still, according to estimates, a millionaire, all right?

I mean let’s forget for a minute that it was from a Trump hotel, because that doesn’t really matter. The point is this guy, who is a millionaire, wanted to buy a used hotel mattress and he had his staffer go look into how to do that. I hope he also asked that staffer to pick up a heavy-duty black light, because you’re going to need it if you’re wanting to buy a used hotel mattress. I’m not kidding when I say that that’s probably one of the more disgusting things we have seen come out of Scott Pruitt.

But really though the heart of the issue, humor aside, is the fact that what Scott Pruitt has done by sending his staffer out there during work hours on the taxpayers’ dime, that is illegal. That is 100% unequivocally illegal.

We also found out on Thursday afternoon that Scott Pruitt also had his security detail drive him around to different Ritz-Carlton hotels so that he could pick out certain kind of hand lotion that he liked that apparently was only available at the Ritz-Carlton. So between the lotion and the disgusting mattresses, the pens, the soundproof security room for his phone booth … God, the first-class travel, the cost of his security detail, the list is seemingly endless, and yet still the Trump administration stands by him, as do many Republicans, because he’s doing everything they wanted him to do.

They can suffer a few scandals here and there, even though a bipartisan majority of people in this country want Pruitt gone, and that includes Fox News, who’s taken to trolling him on Twitter. But as long as Pruitt continues to deliver these minor little scandals, no matter how humorous or disgusting they may be, they’ll suffer through those because he is the guy who’s helping to destroy the environment on behalf of corporate America.