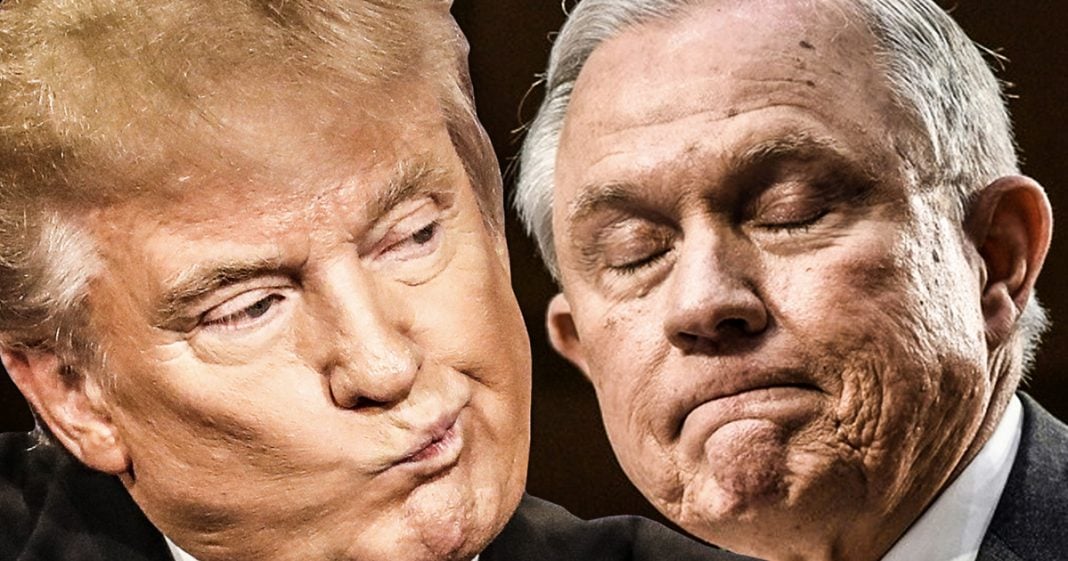 According to a new report on MSNBC, Donald Trump is allegedly so angry at Attorney General Jeff Sessions that he refuses to even speak his name. If true, this report just confirms the childish nature of the man currently running our country, and should give every citizen a cause for concern. Trump needs to grow up and act like an adult or resign, as Ring of Fire’s Farron Cousins explains.

According to a recent report on MSNBC, Donald Trump is a allegedly so mad at Jeff Sessions that he will not even speak his name amongst his staff there in the White House.

Now, I kind of view this story with a little skepticism, all right? This what MSNBC reported, Brian Williams actually was the one who reported it, so I don’t know exactly how much truth there is to that story. Not to mention the fact that Donald Trump is certainly not shy about getting on Twitter and saying Jeff Sessions names plenty of times. We saw it earlier this week when he says that, “If I would have known Jeff Sessions was going to recuse himself, I never would have picked him.” Which is kind of like saying, “Hey, if I would have known that I wouldn’t have a puppet as my Attorney General, who wouldn’t end investigations when I told them too, I would have picked somebody else who was willing to do my bidding, and obstruct justice for me whenever I wanted them to.”

So maybe there’s some truth to the fact that he won’t mention Jeff Sessions name. I would love to think that it’s true. I would love to picture Donald Trump walking around the White House saying, “Ooh, I going to get you-know-who”, or “He Who Must Not Be Named”, and watching White House staff snicker as this kindergartner in chief walks by them. But I don’t think that Donald Trump is petty enough to not actually say the dude’s name. In fact Donald Trump is so petty that Jeff Sessions’ name is probably the only one that he’s actually muttering around the White House because he is so pissed off at him right now.

That is the problem though. We have this man child who has the maturity level of an elementary schooler walking around the White House, fuming about the fact that he can’t obstruct justice. That’s where we’re at as country. It’s not longer really a question of did he or didn’t he, it’s that he’s mad that he can’t obstruct it further.

Jeff Sessions, to his credit, did recuse himself from this. We also know that several times last summer, Donald Trump asked him to un-recuse himself and get back involved so that he could bring an end to the investigation. I don’t think there’s any question anymore, about whether or not Donald Trump actually obstructed justice. The only question that we have at this point is whether this MSNBC report is accurate and whether Donald Trump is actually willing to say Jess Sessions name, or if he’s so furious with him that those words won’t even come out of his pursed little lips.