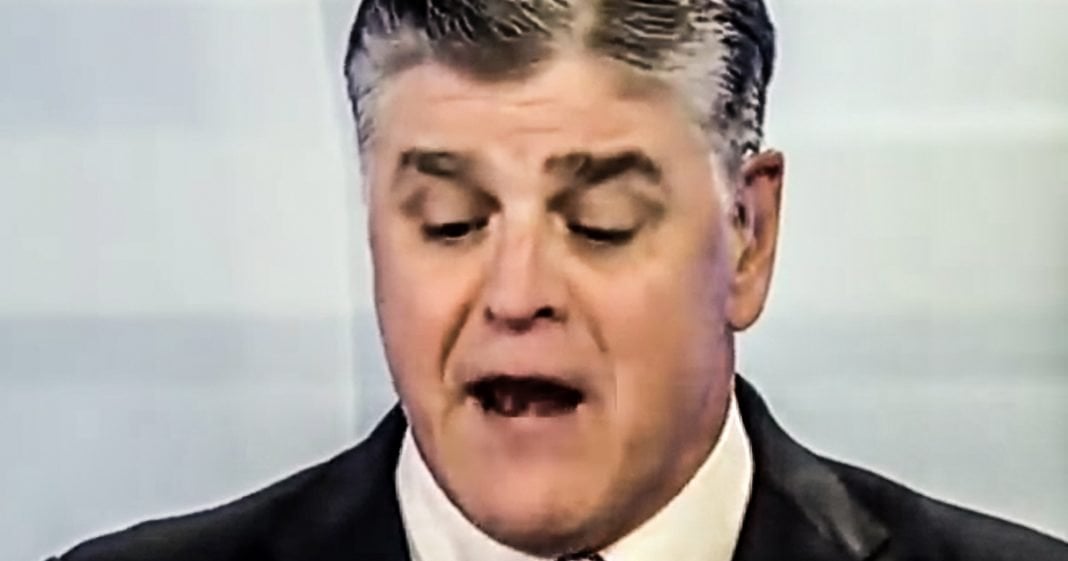 Sean Hannity went off the rails a little more than usually on his Wednesday night program when he encouraged any witnesses or suspects in the Mueller probe to destroy any evidence they may have. Hannity should understand that he’s encouraging his viewers to commit felony offenses punishable by up to 20 years in prison. But there’s a reason Hannity is looking to have evidence destroyed, and Ring of Fire’s Farron Cousins explains.

Farron Cousins:
On Wednesday evening, Sean Hannity actually encouraged his viewers to commit felonies. Sean Hannity right now is actually freaked out that Robert Mueller is getting people’s cell phones for witnesses in the probe, and going through encrypted messaging apps to try to find out who these people have been talking to and what they’ve been saying. Sean Hannity absolutely wasn’t having it, so he went on his program Wednesday night and encouraged any witness or suspect in this Mueller probe to tamper with evidence. Here’s the clip:

Sean Hannity:
I don’t know. If I advised them to follow Hillary Clinton’s lead: delete all your emails, and then acid wash the emails in the hard drives on your phones, then take your phones and bash them with a hammer to little itsy-bitsy pieces, use BleachBit, remove the sim cards, and then take the pieces and hand it over to Robert Mueller and say, “Hillary Rodham Clinton, this is equal justice under the law,” how do you think that would work out for everybody who Mueller’s demanding their phones of tonight?

Now I’m certain the result would not be the same as Hillary’s.

Now I see what Sean Hannity is trying to do there. He’s being sarcastic because obviously, as we all remember, Hillary Clinton went out and smashed all her computers and phones with sledgehammers and then dumped acid on them … Which technically actually never happened, but that’s what Fox News wants people to think actually happened so that they can paint a picture of a Justice Department that absolutely loves the Democrats and hates the Republicans, ignoring that whole thing where Comey came out and basically threw the election in Trump’s favor back in October of 2016. In fact a report that just came out, from the FBI, said that they had told Comey not to go out and make that announcement. He did it anyway, and helped throw the election. But Republicans like to overlook that, right? Because there’s the double standard. There’s the Clinton standard of justice, and the standard of justice for Republicans, which is to frame everyone.

None of that is true. But nonetheless, Sean Hannity is actually encouraging people in this probe to commit a felony. Destroying or tampering with evidence that is part of a federal investigation is a felony, punishable by up to 20 years in prison. And there’s a reason Hannity’s a little freaked out about this issue of Mueller going through people’s encrypted messaging apps: because, as we all remember, Sean Hannity was using an encrypted messaging app to talk to WikiLeaks prior to the 2016 election about info regarding the DNC hack. So yeah, I would think Sean Hannity would be a little freaked out about this.

What’s really fun to me is the fact that as these investigations go on, both the Mueller probe and the Michael Cohen legal debacle there, it all seems to point back to Sean Hannity to an extent. And I would love nothing more for this guy to get roped smack in the middle of one of these investigations and go down with everybody else. And, if nothing else, the guy should at least be investigated for encouraging people to destroy evidence in a federal probe. That is also a crime, Mr. Hannity.

But the thing is, and this is what’s really at the heart of this: If there’s no incriminating evidence on there, then there’s really no evidence to destroy now, is there, Sean? So your encouraging people to go and destroy their phones means that you believe that there is evidence out there of criminal activity. I bet you didn’t think of that when you were out there doing your little sarcastic monologue, did you?