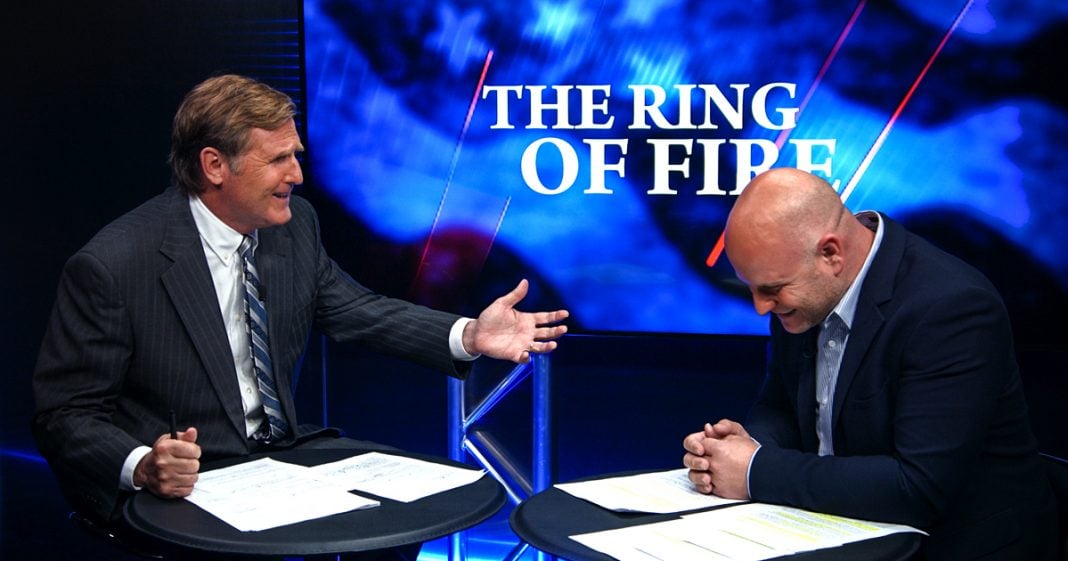 MSNBC finally decided to comment about the Joy Reid drama, and to no one’s surprise, they said they stand by their troubled host. Ring of Fire’s Mike Papantonio and Farron Cousins discuss this.

Mike Papantonio: The MSNBC has finally decided … This story, I swear to god. So, MSNBC finally decided to comment about the Joy Reid drama, if that’s what you want to call it. The Joy Reed insanity. The woman needs to be in a cuckoo house. And no one is surprised that MSNBC has decided to make no comment. They said they stand by their troubled host. Troubled psychologically. This woman has, she has squirrels running around in her head. To me, I look at this woman … Take it from there. Am I overreacting to this? I can’t take another minute of the Joy Reid story, where she’s on tonight. She’s on like nothing happened here. Give us the facts.

Farron Cousins: To me, I’ve been following this since it first happened weeks, months ago, whatever it was, and I like to look on Twitter. And I like to see the responses of people on any of these stories. This one happened to be from The Daily Beast. “MSNBC staff on Joy Reid, enough apologies, we want answers.” So, the staff at MSNBC wants answers. And all the Twitter responses to this are, “Leave Joy alone, she’s too important to lose her voice.” “She said she’s evolved.” Well, you know what, it’s not just about evolving on an issue. Everybody does that, whatever. The fact is, you went out there, destroyed your whole credibility as a journalist by making up a bogus claim that you were hacked.

Mike Papantonio: Okay, let’s talk about the hack. Okay? First of all, she says, “I was hacked.” Now of course, no body believes that. But, then she goes out and she gets the FBI, they’re going to do an investigation of this Joy Reid hack. Like that really matters? We got issues much bigger than Joy Reid keeping her job. Then Joy Reid goes out and hires this numb-nut who’s, he’s supposed to be a cyber tech forensic guy. And so, he comes back “Oh yeah she was absolutely hacked.” And then we find out he’s a fraud and Joy Reid had to apologize about him because she knew that she hired a nut case fraud to try to stand behind her story. Where does it stop?

Okay, give me the stories that we’ve learned about Joy Reid. Let’s try to knock them around as best we can.

Farron Cousins: Now, you have the promoting the Alex Jones-

Mike Papantonio: It was a government conspiracy.

Farron Cousins: The Photoshop of John McCain as the Virginia Tech shooter. Which they say, “Well, it wasn’t about him doing …” No, no, no you don’t take the image of somebody from a tragedy like that and put somebody’s head on it. And the most important, obviously, are all, all of the massively homophobic blog posts that she had had over the years. And it just, it all paints the picture of someone who at the time didn’t know what she stood for, wanted to test the waters and see where everybody wanted her to go.

Mike Papantonio: That’s the point. She will go wherever the wind blows. Right now, and this is absolutely how MSNBC operates. Let’s go where the wind blows. You remember, we covered the story, I mean we’ve been doing this a long time. We covered the story of Phil Donahue. Okay, Phil Donahue gets yanked because he comes out against a war that MSNBC was trying to flame every single night. They had advertisers from Boeing and McDonald Douglas on their show flaming the law, flaming the war. Because they could sell more advertising, okay? So, they replace it with none other than Michael “Crazy man” Savage. Michael Savage comes in to replace Phil Donahue. And it all has to do with Phil Griffin who is a … Wherever the wind blows Phil Griffin will go. If we’re conservative for a month or two, he’s going to go there. If we’re liberal, he’s going to go there.

Joy Reid is an example of what we’re talking about. Okay? Like we can’t live without Joy Reid? Let me just tell you something, we’ve interviewed, just to be clear, we’ve done interviews with people like Howard Zen, Chambers Johnson, Noam Chomsky. Those are issues … Chris Hedges. Those are people that matter. They really are great intellectuals and they really matter. Joy Reid, come on man. You’re going to lose the credibility of your network to where you actually have Rachel Maddow, who I used to work with on Air America. Rachel Maddow who I don’t even recognize anymore. I swear to god, I don’t even recognize her. She comes out, “Brains, guts, heart, and soul. Believe Joy Reid has always been a treasured and brilliant colleague. But, I’ve never … ” Come on, man. Where do we stop being tribal? When do we stop being damn democrat tribal nut cases or republican nut cases? When do we stop being tribal and call balls and strikes?

Farron Cousins: Well, that’s the thing. If these same people want to get upset about Roseanne Barr, and yes there’s a difference between the racism. But, really is there? When you’re talking about a racist Tweet or a homophobic blog post, isn’t it the same form of hate? And you can say that she’s evolved all you want. Maybe she has, maybe she hasn’t. That’s not the issue. The issue is, she lied about an FBI investigation that no body has been able to corroborate as actually happening. She hires this cyber security nut, who goes out there and lies to the public.

Mike Papantonio: And then apologizes about him.

Farron Cousins: Right. And nothing she has said has made any sense. It’s all been lies to the people supporting her. And they still say she’s too important.

Mike Papantonio: This is the new MSNBC.

Mike Papantonio: Okay, that’s the problem. I can’t say new, it’s always been the history of MSNBC. Go where the wind blows if we can sell advertising. It’s like you’ve said on this show, is anybody really going to go out and buy a Patriot Missile because Boeing or McDonald Douglas is advertising on MSNBC? They’re doing that for access. And MSNBC, they just eat it up. They just eat it up. Right now, I gotta tell you something, this is a defining moment, even Joy Reid’s own staff, they’re own staff is saying, “Really? We’ve got to produce a show for this woman?” Who is a nut job. There’s not other way to describe her. She’s an absolute nut job.

Farron Cousins: And it’s really sad for those staffers too, because they’re out there and they all spoke to the Daily Beast. Anonymity, which is fine for them. But, you and I personally know several of the people that work on that program.

Farron Cousins: Yes, we have. They’ve been down here in our studio plenty of times. But, they want the answers. And they’re not getting them. They don’t believe the story. They know, according to what they’ve said, that she is making this up.

But, real quick, I want to hit back on the fact the people defending her. You know how one of the attacks they lay out on people who say, “Well, we need some answers on this.” They say well, it’s racism. You don’t want a black woman to be successful.

Farron Cousins: And the question for them is, well where were you when the network canned Melissa Harris Perry, who was phenomenal. Or Michael Erik Dyson?

Mike Papantonio: Yeah, yeah. Two great, great voices. This isn’t racism. Just like Hilary Clinton’s election wasn’t misogynist. We’ve got to get away from this narrow tribal thinking or we’re just self-destructive. And that’s what’s happening here. Is there any other way you can see this?

Farron Cousins: No, this is absolutely self-destructive for people to stand by and blindly defend it. If you want to say, I’m going to reserve my opinion or thoughts on this until the results of that FBI investigation, then say that. But, do not go out there and say it doesn’t matter what she said, she’s so important, we need her.