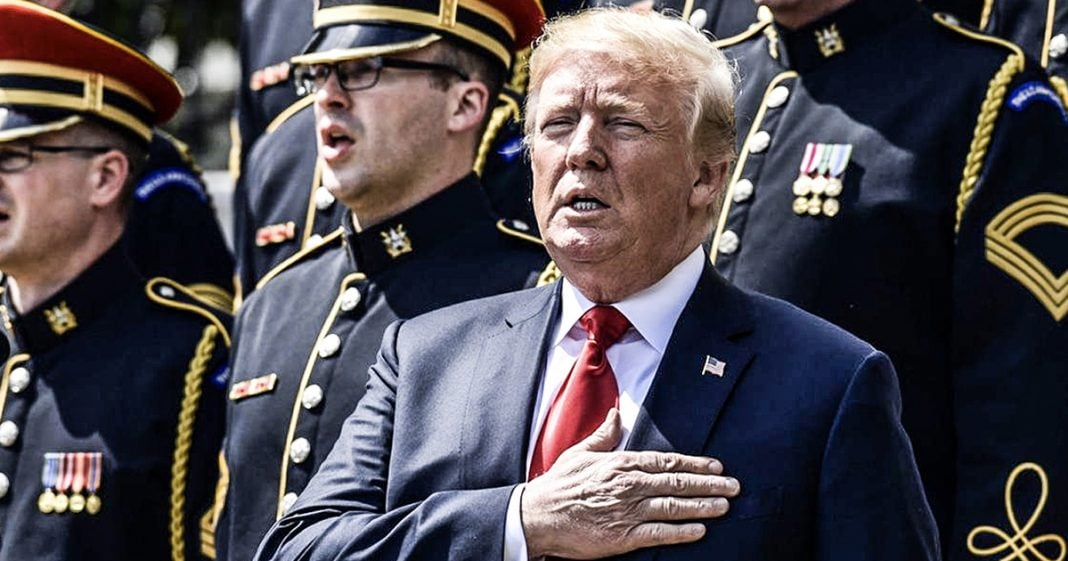 During his patriot gathering on Tuesday that was supposed to be a victory celebration for the Philadelphia Eagles, Donald Trump was caught on camera mouthing the wrong words to “God Bless America.” This is the second time Trump has forgotten the words to a patriotic song on national television, the first being when he didn’t know the words to our own National Anthem. Ring of Fire’s Farron Cousins discusses this.

On Tuesday of this week, in what was supposed to be a celebration for the Philadelphia Eagles for winning this year’s Super Bowl, but instead turned into Donald Trump having his little gathering of so-called patriots, the president attempted to sing the song, God Bless America that was being played. Many people in the audience were actually singing it, but Trump, as he’s shown us several times actually now in the past, doesn’t know the words to this very patriotic song. Take a look. (Singing).

Now again, what’s really funny about this is the fact that Trump didn’t want the Philadelphia Eagles to come to the White House to celebrate their Super Bowl victory because too many of them weren’t going to show up. He decided to make this into some kind of super patriot event, to honor the United States instead, and the guy doesn’t even know the lyrics to God Bless America, one of the simplest songs out there.

If you remember not that long ago, Donald Trump was actually at a sporting event on the field, where he didn’t know the words to the national anthem. At this point, all we need for him to do is not know the words to America the Beautiful, and then we get the tri factor of fake patriotism, because that is exactly what Donald Trump is about. He wanted to make this grand event to show just how much he loves this country. But in reality, the guy can’t even be bothered to learn a song that most of us learned in kindergarten.

This is absolutely unbelievable at this point. Anybody who thinks Donald Trump is actually a patriot, or that he cares about America, you need to go get your head checked. This guy cares about one thing and one thing only, and that’s money. He’s not going to make any money from having these phony patriotic events. He’s going to make money scamming the American people, and that is exactly what he did on Tuesday. He may not have profited from it financially now, but he gained a lot of political capital amongst the easily manipulated republican base.