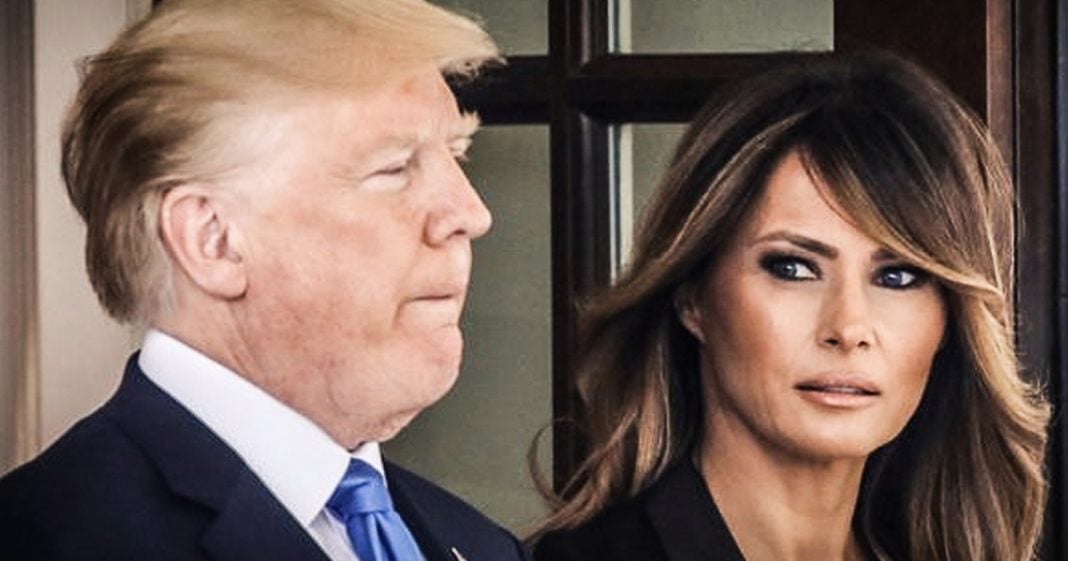 Melania Trump was finally seen by invited members of the public for the first time in almost a month during a White House gathering for Gold Star families. And in true Trump fashion, Donald immediately joked about his wife leaving him before she even had the chance to speak. This man has no class whatsoever, especially considering his audience for this “joke.” Ring of Fire’s Farron Cousins discusses this.

On Monday, Melania Trump made her reemergence, I guess, for the American public at a closed-door event honoring Gold Star Families at the White House. It had been before she came to this event, 25 days since she had been seen by any member of the public, and of course the press wasn’t allowed to go into this Gold Star Family meeting and dinner. But one thing do we know from people who attended, and from some of the footage captured on people’s cell phones, is that Donald Trump, who was also there with Melania, got up on stage and actually made a joke about Melania’s alleged legend disappearance joking did she leave him? So in a room filled with families who lost loved ones in the armed services, they are missing their family members because they died in service of the United States. Trump joked about his wife who had not been seen for 25 days leaving him.

Now, to her credit, Melania did not address this. She didn’t kind of smirk or snicker anything she just kind of sat there when she spoke, she did not address his joke whatsoever, which was really good on her part. But to be honest, Trump immediately coming up there and joking about his wife leaving him, which is not the first time he’s done that since being president, kind of gives us a little bit better picture of why Melania likes to disappear from the public eye. At this point honestly, I can’t blame her for this. Trump has been so horrible to her every possible opportunity. If you remember, there is the one time he was up there talking to hurricane victims with Melania standing right next to him where he says, “You know Melania really wanted to be here” and she was right next to him. It’s like the man didn’t even know she existed.

I’m wondering myself if Trump even knew that she wasn’t seen by the public for 25 days until he saw people tweeting at him this past weekend. Melania if she wants to disappear at this point, let her disappear. If she wants to leave him, leave him. We have very real issues and very real problems to deal with in this country and we can’t waste any more time wondering where Melania is. Or maybe, if she did leave him or what’s going on. The families in that room have holes in their lives that will never, ever be filled again. Children lost their parents, spouses lost their spouses, and Trump thinks the best course of action for these people going through some of the worst tragedies you can imagine, is to go out there joke about his own wife leaving him or otherwise disappearing. This man has absolutely no class whatsoever.