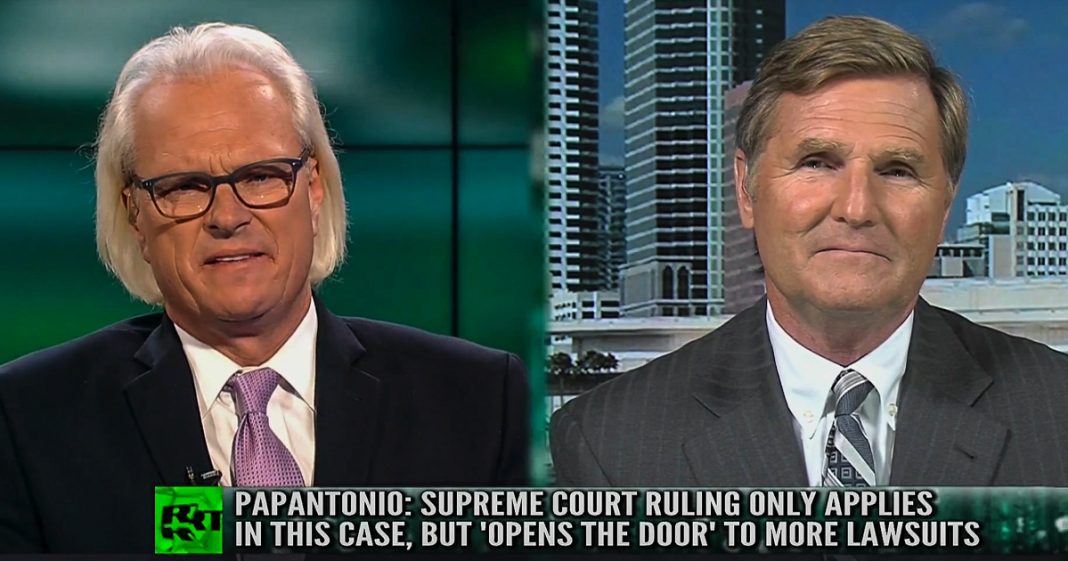 Via Boom Bust RT America: The U.S. Supreme Court ruled in favor of a baker who refused to bake a cake for a gay wedding. America’s Lawyer Mike Papantonio is on today to give his take on this latest decision.

Bart Chilton: And yesterday, as we reported, the US Supreme Court ruled in support of a Colorado baker’s decision not to bake a cake for a same-sex couple’s marriage. What might the ruling mean for other businesses? Let’s find out and bring in America’s lawyer, Mike Papantonio. Counselor, thanks for joining us. The contention was that the baker had a First Amendment right not to create or bake a cake. Does the ruling set a precedent for other businesses here?

Mike Papantonio: No. I think it’s a very narrow ruling the Supreme Court handed down. It’s unlikely to have any real repercussions for other businesses, at least for right now. What the ruling specifically says is, the original group that brought the baker to court was too overzealous — a very interesting kind of language here — too overzealous in their attack on bakers’ religion, and due to that incredible animosity, that’s all through the opinion how they go back to this issue about incredible animosity, how this is just a personal attack on his religion, that they displayed a violation of this man’s First Amendment rights. That’s what the ruling says. So, this particular ruling only applies to one baker in this one instance, but it does open the door for future cases to effectively decide this matter.

What I’m saying most importantly is, they should have made a common sense secular kind of argument where they just on the bigotry of this individual and relied on just run of the mill discriminatory kind of language, they should have gone after him not for his religion, but the way the attack was made was just bad lawyering, really, when it comes down to it. They focused completely around this religious animosity issue, and it really did edge right into a First Amendment problem which raised the standard for what the court had to review. Anytime you move into religion, things like race, religion, you’re actually raising the standard of the level of review that the court engages in. So, really this is, honestly, just bad lawyering, but at the same time it does kind of tweak the notion that this is a court that is interested in kind of taking a closer look, maybe, at religious liberties and how they balance against, I guess, secular issues. That’s what it reads to me, but in this particular case, there’s no broad meaning to this case, in my reading of it.

Bart Chilton: Mike, it sounds like not only bad lawyering to me, but as a former regulator, it sounds like bad regulating to me. You mentioned the Colorado Civil Rights Commission which originally ruled against the baker as being hostile to religion because of the remarks of one of its members. If that had been not in the record, if the regulators had done a good job, do you think this decision would have played out the same way?

Mike Papantonio: Right. I think if this had just been handled just as a regular discrimination case, I mean, the chances of it at least getting past a 7-2 decision would have been much higher, but somehow that happens in the business of regulation. When we take our politics with us we don’t actually stand outside and look at what the field looks like and make decisions according to that field, we take this overzealous notion. Maybe this was somebody that had this overzealous notion in their need to attack religion, and in doing that, they actually were in the process of creating what some people might say is bad law because now somebody’s going to build on this. They’re going to say, they’re going to point out that overzealous attacks, anytime that it falls within a religious realm, that we can easily fall into this case, so, you know, bad lawyering makes bad laws, and bad regulatory agency conduct certainly makes bad laws, too.

Bart Chilton: A bad soup. Counselor, this seems like a real balancing act for the court in that they must consider, you know, discrimination while respecting individuals’ First Amendment rights, and that’s particularly in focus given Justice Kennedy, who wrote the majority opinion, has written pretty much every major Supreme Court decision protecting gay men and lesbians. On the other side, he is also an ardent free speech defender. I mean, how do the Supremes look at those two under the law, free speech and non-discrimination, when they will be in conflict?

Mike Papantonio: Well, there is never a formula, okay, but there are certain kinds of cases that are always going to get what we call a higher level of scrutiny, and then they’re going to, from that higher level of scrutiny they’re going to find unique aspects of the fact situation that maybe can move it towards a free speech kind of protection or towards a religious protection. You could go to years and years of constitutional law classes, and you would never come out with a formula beyond that. But it’s interesting to me that you had a 7-2 kind of decision here. That’s telling you that, you know, that people looked at this, and they were upset by this vigorous anti-religious argument, and so that, to answer your question, that’s one element that swayed the court, obviously, so it’s different case to case. How good is the lawyer presenting the issue? Does the lawyer understand the court precedent? Do they understand, kind of, the backstories to some of these Supreme Court Justices? This was totally misunderstood by the lawyers and the regulators in this particular case.