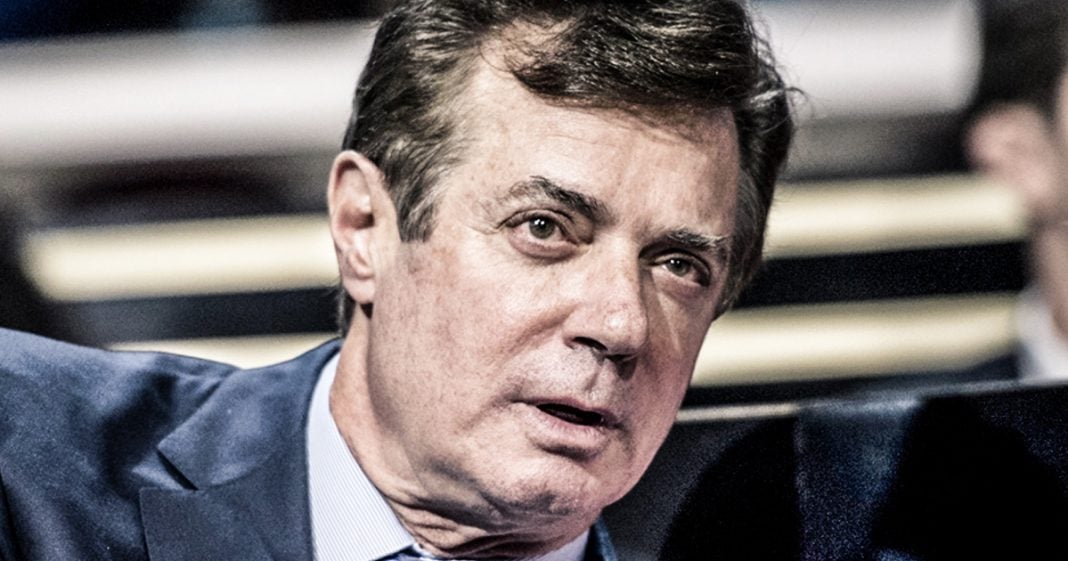 Former Trump campaign manager Paul Manafort has been slapped by Robert Mueller’s office with charges of witness tampering for sending messages to potential witnesses and trying to “coach” their testimony to fit around his story. This is bad news for Trump, as it not only shows a certain level of guilt on Manafort’s part, but also shows that Mueller’s team is on top of everything that is going on behind the scenes. Ring of Fire’s Farron Cousins discusses this.

Former Donald Trump Campaign Manager, Paul Manafort, has been hit with new charges from Special Prosecutor, Robert Mueller, of witness tampering as he sits and awaits two separate trials for things including tax fraud and money laundering. Now, what’s interesting about these new charges against Manafort is that he is currently out on house arrest as he awaits both of his trials, and several times while being on house arrest, the Special Prosecutor’s Office has had to go in front of the judge and complain about things that Manafort has been doing while he’s been out. They believe that he was inappropriately releasing op-eds, basically trying to sway public opinion about the upcoming trials that he was facing. But now they’ve found out he was actually also trying to tamper with witnesses to get them all on the same page.

Here’s what happened. Paul Manafort’s entire defense hinges on the fact that he claims he was doing lobbying work for a pro-Russia party in the Ukraine on behalf of European Union people who hired him. Now, while he’s been out on house arrest, between the months of February and April, we have now seen that he was using an encoded messaging app called WhatsApp, along with other text messages, phone calls and things like that, with potential witnesses in the upcoming trial. He was telling them to, “Make sure that you tell them that everything we did was for the European Union. They have to know this. You have to be on the same page as me.” He was trying to coach their story so that he didn’t end up getting popped for perjury a little later down the line, as he’s already been hit with, I think, close to a dozen, maybe even more, charges with the two trials combined.

Here’s what this means for Manafort at this point. Right now the Special Prosecutor is already arguing based on the evidence they have of his potential witness tampering, that he should be put in prison while he awaits trial. They should revoke his house arrest, revoke the bail, put him in jail, while he sits and waits for trial. If that happens, that is going to put more pressure on Manafort to make some kind of plea deal with the prosecutors in order to avoid a lengthier prison sentence. At this point it is unlikely that anything Manafort can do will make him avoid jail altogether, but if he does cut a deal, he might get a shorter sentence. As Democratic representative, Ted Lieu, pointed out, he can either spend most of the rest of his life in jail, or he can cut a deal and spend only part of the rest of his life in jail. Those are basically Manafort’s only two options at this point. It’s an option that his cohort, Rick Gates, took a few months ago to Manafort’s surprise. They had both initially pleaded not guilty, but then Gates later came back and said, “You know what, let’s do a plea deal. I’ll plead guilty, we can move on, I’ll work with you, I’ll give you whatever you need.” Manafort’s going to have to make a similar deal, otherwise the man could very likely spend the rest of his life in prison.

So what does this mean for Donald Trump? Well, it means a couple things. First and foremost, it shows that Robert Mueller’s team is not taking the issue of obstruction very likely. Same thing goes with witness tampering, which you could easily argue that most of what Donald Trump has been tweeting or saying about this investigation could amount to witness tampering. We don’t know what he’s done behind closed doors, but based on what he’s done in public, it seems very likely that he’s doing the same with people where the public cannot see.

Another thing it means is that if Manafort does end up making a deal, obviously they’re going to be looking for information on Donald Trump himself. Now, the Trump administration says Manafort has no incriminating evidence on them, so they’re not really worried about that. However, considering the fact that this administration has basically lied about everything that’s happened in this investigation so far, including Manafort’s role within the Trump campaign, where they said he had a very tiny role, but in fact he was their Campaign Manager, the guy in charge, for over two months. I think they understand exactly how important Manafort is. And it gets even worse because they can’t even dangle a pardon in front of him because some of the charges, one of the trials that he’s facing are for state crimes, not federal crimes, and the President can’t pardon someone under that situation.

Things are getting so much worse for everybody involved in this Mueller investigation, including Donald Trump, and at this point, I think people like Manafort understand that their only way to avoid a life in prison is to turn on the President.