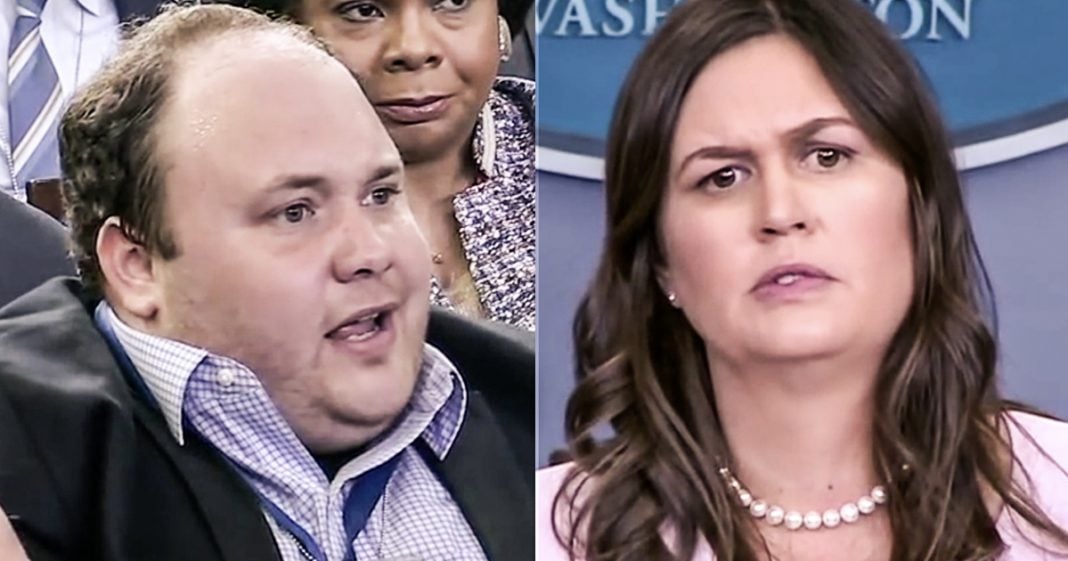 During Monday’s White House press briefing, Sarah Huckabee Sanders was put on the spot by a reporter who asked about her changing story about Donald Trump, Jr.’s statement to the New York Times. Last year, Huckabee Sanders told us that Trump was not involved in the statement, but now it has been confirmed that Trump himself dictated the letter. Sanders had trouble answering, and the reporters in the room immediately knew they would never get an honest answer from her on anything. Ring of Fire’s Farron Cousins discusses this.

In the last few weeks, it’s become more and more obvious that reporters in the United States are no longer afraid to call Sarah Huckabee Sanders out for her lies. Last year, Huckabee Sanders told us that Donald Trump, the President of the United States was in no way involved in the New York Times response that Donald Trump Jr. gave about his Trump Tower meeting. Now we’ve found out in the last few days that Donald Trump himself actually dictated the entire response, making what Huckabee Sanders said last year completely false. And on Monday during the White House press briefing, one reporter decided to ask her why we should ever believe anything she says. Take a look.

Jim Acosta: … follow up question is, if I could ask who these leading scholars are that you are citing.

Sarah HS: I’m going to direct the question to Josh. Go ahead.

Josh Dawsey: But Sarah, the words are literally, you said “he did not dictate,” the lawyers said he did. What is it?

Sarah HS: I’m not going to respond to a letter from the president’s outside counsel, we’ve purposely walled off, and I’d refer you to them for comment. John.

That was Washington Post reporter Josh Dawsey who asked that question, and he made a phenomenal point, and it’s absolutely right. Why should we, as a public, as a press, as whatever, believe anything that comes out of Sarah Huckabee Sanders’ mouth? Last year she told us unequivocally that Trump wasn’t involved. And now, today, she’s telling us, it’s a matter for the legal team, don’t ask, I can’t answer that. Well you already did answer that. He’s not asking for a new answer. He’s asking why you lied about it, Sarah. That’s what other reporters in this country have to start doing. And he was not the only one who stood up to her in yesterday’s press briefing. There were several others.

But anytime this happens, here’s what the press needs to start doing. They need to get up and walk out of the room. Pretend you’re Nikki Haley at a UN meeting. And do what she did. When somebody you don’t like starts talking, you just get up and walk out, regardless of how rude and disrespectful it may be. Because even if you think that that is rude, to just get up while somebody’s talking and walk out, what’s even more rude is to sit at a podium every single day and lie to the American public and lie about things that you had already said. And then not come clean about those lies, and then lie again and say that you’re not even allowed to talk about it. Because that’s what Sarah Huckabee Sanders is doing. It’s great that the press is starting to call her out.

And I credit Michelle Wolf with that. Because before Michelle Wolf gave that speech at the White House Correspondents’ Dinner, these members of the press were more than happy to sit there and let Huckabee Sanders lie to them. But ever since that, there has been a change. And that change is that these reporters are no longer sitting there quietly, waiting for Huckabee Sanders to tell her latest lie. They’re calling her out on it. They’re bringing up things that she said in the past. And they’re not going to stand for it anymore.