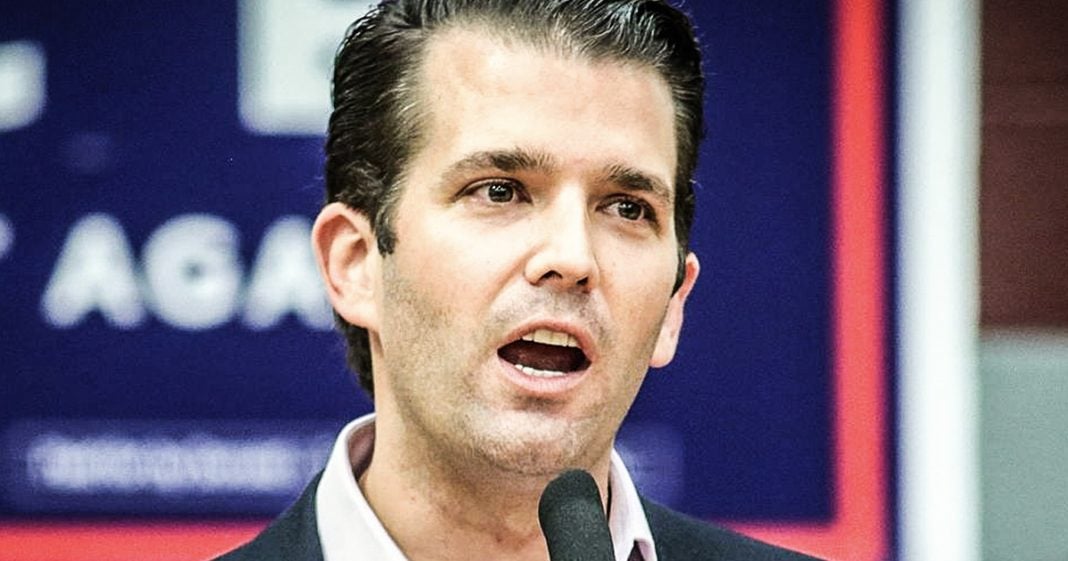 Publishers are turning down the chance to publish a book written by Donald Trump, Jr. because they fear that he is ultimately going to be charged in the Mueller probe, and they don’t want the negative publicity of potentially publishing a criminal. The entire country, except for a few diehards, have lost faith in the Trump family, and Junior’s book woes are just the tip of the iceberg. Ring of Fire’s Farron Cousins discusses this.

Donald Trump Jr. has apparently written a book. Now if that’s not shocking enough, what the book is about is apparently a complete defense of everything that his Father has done basically since announcing that he was going to run for president. If you can imagine, the book is obviously going to be filled with lies and falsehoods and misstatements and quotes taken out of context to try to basically acquit his father in the eyes of the public.

There’s just one problem with Donald Trump Jr’s little book of lies. Nobody wants to publish it. According to a recent report which was actually on Fox News, nobody wants to publish Donald Trump Jr’s book. He is getting rejected so far by every publisher that he has met with because they don’t want to publish his book because they’re afraid he’s ultimately going to end up being charged as part of the Mueller investigation.

Here’s what that means. Basically these publishers are saying, look we understand this is a book by a Trump. It will be a bestseller among Republicans, but if this guy is charged and we’ve published this, and our publishing house’s name is attached to it, that’s going to make us look really bad because we published a book of lies from a guy that could be facing life in prison, or at least decade in prison, maybe just a few years in prison, but either way, typically not great business for publishing houses to put out a book of lies by somebody who ends up going to jail.

That’s the reasoning that all these publishing houses have given so far as to why they’re rejecting junior’s book. What it also shows is that the general public which you don’t typically see if you scroll through Trump Jr’s Twitter feed or even his father’s Twitter feed, but for the most part the general public understands that this Mueller investigation is a big deal. They’ve seen the stories. They’ve read the reports. They’ve seen the indictments and they understand that more is coming and most likely, based on all the evidence we have, Trump Jr himself is going to eventually be indicted.

This is less about Trump Jr actually managing to write a book than it is about the public understanding that this guy is likely a criminal. Now it may turn out that he did nothing wrong and he’s not a criminal. He’s just a misunderstood guy, but right now the public businesses, publishers, they understand that Donald Trump Jr and his father are toxic for their businesses.

At this point, they’re actually toxic for their own businesses, as most Trump properties here in the United States have lost money in the last two years, since Donald Trump entered politics. These publishers don’t want to go down that same path by hitching their wagon to a guy like Donald Trump Jr.