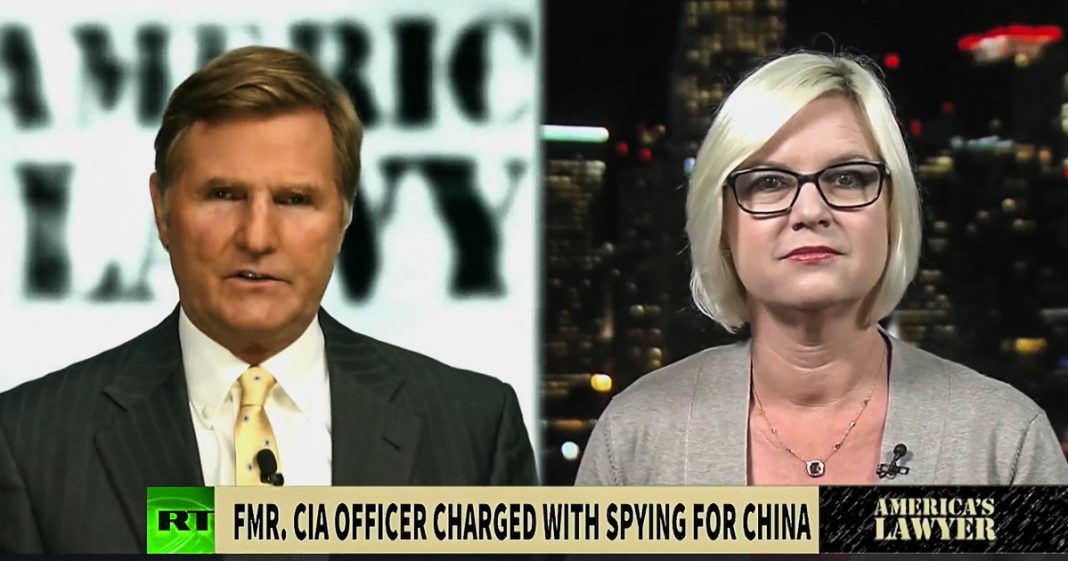 Via America’s Lawyer: Mike Papantonio is joined by Mollye Barrows to discuss a former CIA officer that is facing charges of espionage for illegally possessing classified material and aiding the Chinese government.

Mike Papantonio: A former CIA officer is facing charges of espionage for illegally possessing classified material and aiding the Chinese Government. Jerry Lee, who worked at the CIA, believed to have used his position in the intelligence agency to help Chinese intelligence take down American spies which led to the imprisonment and even the death of informants.

Joining me to talk about this Mollye Barrows, legal journalist for the Trial Lawyer magazine. Mollye, I find it incredible that the media is all over, “Oh my God, Russia hacked,” here you got the CIA where there’s not even speculation. They caught this guy actually giving the secrets away and informants died because of it. People who were working for our government were killed and imprisoned because of it. And it’s a little hard to find this story when you’re trying to compare it to, “Well gee whiz somebody in Russia hacked and Hilary lost.” This is what bothers me about the state of journalism right now. What do we know about the CIA officer and how did he sell out his fellow colleagues, Mollye?

Mollye Barrows: This is such an interesting story for a number of reasons, and you hit on a couple of them, Mike, talking about the political side of it. But this guy, Jerry Chun Shing Lee, 53-years-old, he is an American citizen, although he was born in Hong Kong. He was raised in Hawaii. He went to work for the U.S. Army for five years. And then he joined the CIA. He was in CIA for about 13 years. It seemed like he was from 1994 to 2007. So during that time he became an officer. He had access to all kinds of classified information. And the problem came when apparently he left the army, he left the CIA. And instead of giving up the classified information that he had access to he actually kept it. That included the names and contact informations of operatives that were U.S. operatives in China. In fact, part of his job when he worked for the CIA was to cultivate those human intelligence contacts and the sources.

And it also, this man’s arrest, it’s interesting. They’re making very distinctive nuances, even down to his charges. While he’s charged with, basically charges related to conspiracy and possessing this information. He’s not actually accused of handing it over. They say they can’t prove that he gave those names and numbers to Chinese handlers in China. But what they can show is that he possessed information he wasn’t supposed to have, and that he was having contact with these Chinese handlers. And he was also receiving unusual amounts of cash. According to U.S. documents-

Mollye Barrows: … 100 grand plus promises he’d be taken care of for life.

Mike Papantonio: And you hear a story like this, you start saying there’s something dysfunctional about those agencies right now. And why don’t we do what was done during the Church hearing and that is to clean house. Congress called hearings. They put all of these people under oath. They asked them really tough questions about things like spying on Americans and having agents that were deep-sixed in different countries all around the world. Why don’t we do that again? Doesn’t that sound like it’s time right now? Aren’t we at that critical juncture where people have just completely lost faith with intelligence operatives, in general. What is your take on that?

Mollye Barrows: Well certainly in this situation, because you’re talking about 20 American operatives in China who were either imprisoned or killed. And this is coming out as a result of Lee’s arrest. And they believe, they can’t directly connect him to these deaths and imprisonments. But they can say that this is the kind of information that he possessed. By working with China, he compromises individuals, these were individuals well placed within the Chinese administration to give the United States government a better handle on how this extremely secretive government worked. Now, let’s not make any bones about it, China’s spying on the U.S. just like we are with them but they’re doing more cyber snooping.

So you’re 100% right. It’s always done in the name of defense of country. But when you have explosive stories like this open up you see the extent of the damage that was done. Whether they can prove this particular American spy was linked to this or not. The fact of the matter is we had 20 U.S. related spies and operatives in China that are no longer to be heard from. They’re either dead or imprisoned. China took care of business. So when we extend ourselves for that far and cost that many lives and repercussions at home and abroad, all for the sake of defense. Then you’re right. There does seem to be some need for checks and balances.

Mike Papantonio: Yeah. The intelligence system is broken right now. I believe from the FBI, the CIA, department of justice it’s broken. It is time for some serious hearings like the Church hearings. Thank you for joining me.