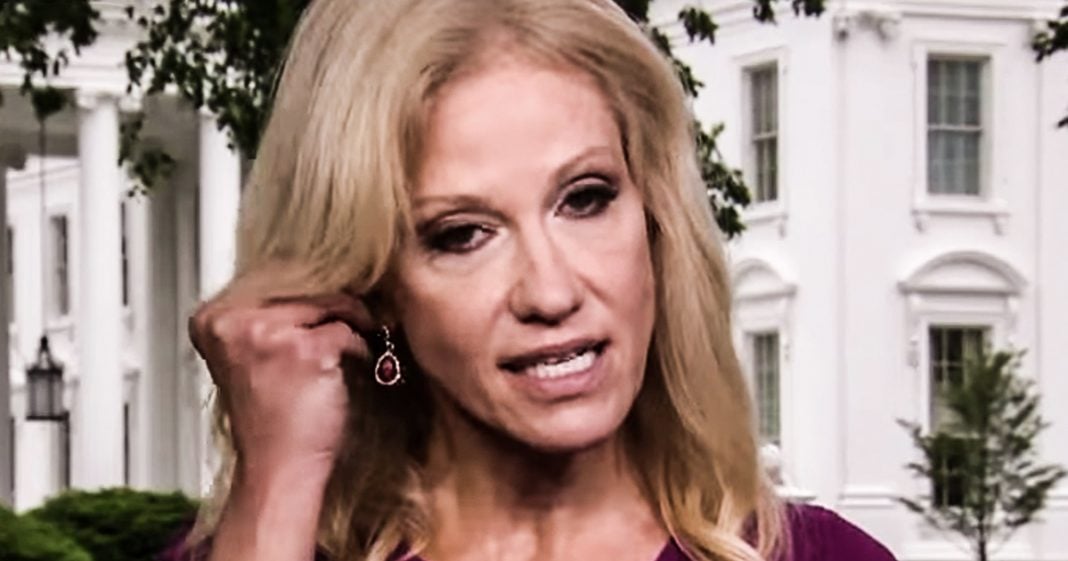 During a bizarre interview with Fox & Friends on Monday, White House counselor Kellyanne Conway made the ridiculous claim that Bill Clinton and Barack Obama are completely selfish people who only like to talk about themselves. This is projection at its finest, and to use Kellyanne’s own statement against her, the entire interview was “awkward.” Ring of Fire’s Farron Cousins discusses this.

Based on a recent interview that Kellyanne Conway gave to Fox and Friends, it seems like she’s never actually met the man that she works for, Donald Trump. Kellyanne Conway was called recently to come into an interview and I guess talk about Bill Clinton, or at least that’s where the interview started. But immediately at the start of this interview, she talks about how selfish and egocentric both Obama and Bill Clinton are with a descriptor that really could best be applied to Donald Trump himself. Take a look at the clip.

Bill Clinton: Well, they did treat him differently than other Democrats and Republicans because it was the political press. I don’t know. They liked him and they liked having the first African American president.

Steve Doocy: Well, somebody who works for the current president is Kellyanne Conway. She’s counselor to President Trump. She joins us on this 500th day of his administration from the North lawn. Kellyanne, good morning to you.

Steve Doocy: So there you have Bill Clinton talking about how he felt that Barack Obama got better press because the press liked him.

Kellyanne C: It’s a very awkward moment. Whenever I hear both Clintons and even President Obama occasionally talk, I can’t help but think that it’s a documentary called Me, Myself, and I. They still just talk about themselves all the time. They have considerable, major platforms to help Americans, if not folks across the globe. We don’t hear much from them here about getting involved in issues that are decidedly, I would say, nonpartisan or bipartisan. I’d like the hear from them today on our 500th day of American greatness. Look at these jobs numbers. What I think people weren’t ready for with respect to President Obama was Obamacare that has left 30 million Americans without healthcare. They couldn’t keep their plans. They couldn’t keep their doctors. This president has turned the poor economic jobs and growth numbers around from the last administration.

Okay, before we get into the real issue, I’ve got to address her little awkward there because that in itself was truly awkward. I don’t know if you think that you’re some kind of 15 year old high school girl. But professional people working in the White House don’t typically have that kind of response when they’re trying to act like professionals. But let’s get to the real issue here, the fact that you think that Bill Clinton and Barack Obama are some of the most selfish people on this planet. Me, Myself and I is the documentary or whatever you think you’re watching about them. Honestly, have you met Donald Trump? Have you ever seen any tweet that this man has sent out? There is not a more egocentric person in this country than the man that you work for. I mean, this is absolute projection at this point. Kellyanne Conway went on Fox and Friends and tried to pass along the attributes of Donald Trump to people that the American public actually respects, like Barack Obama, can’t necessarily say the same about Bill Clinton. But here’s the truth as well. You’re saying they’re not doing anything good.

Let’s not forget that in spite of all of his flaws, Bill Clinton did actually work with the George W. Bush administration and went over to North Korea and got some hostages freed many years ago after he had already left the White House. He’s done a lot since leaving the office of the presidency. Barack Obama has taken a little bit of time off, as most presidents do. They typically disappear for two, three years afterwards. But then they go and do other things. But does it really even matter what former presidents do? George W. Bush, George H. W. Bush, Ronald Reagan, the last three Republican presidents did not do a thing for the American public or for this country after leaving office. Jimmy Carter has done more than anyone else to help this country since leaving office. The rest of them, not so much. But certainly the Democrats have done a hell of a lot more than the Republicans. So Kellyanne, I suggest you go back and look at the history of what past Republican presidents did after leaving office and compare that to the Democrats.

But more importantly, I suggest that you stop projecting those horrible traits of your boss onto people that the public still admires.