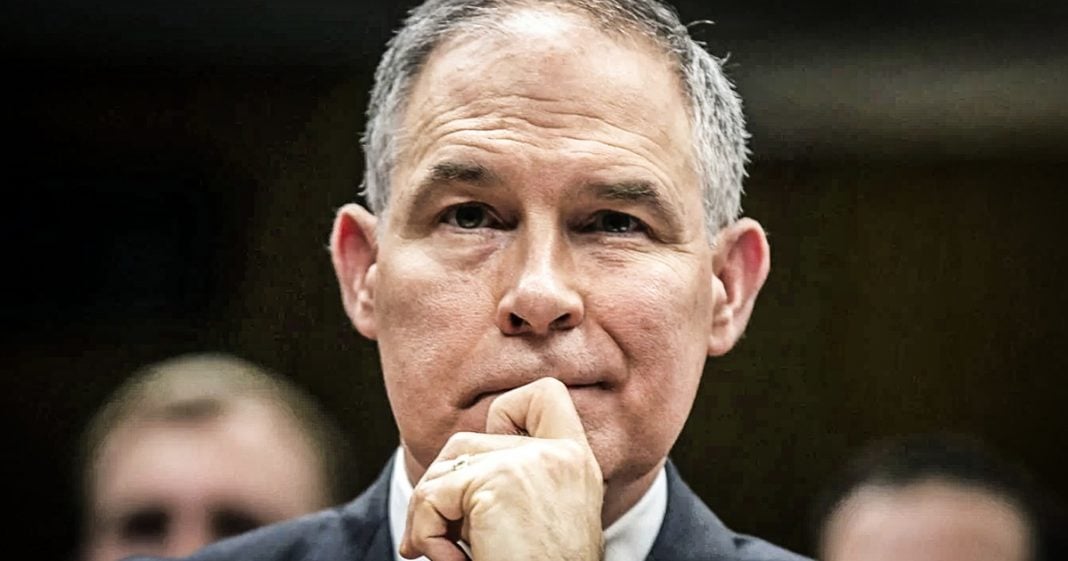 Scott Pruitt, the leader of the EPA, might be suffering from an undiagnosed mental illness. His constant need for enhanced security shows that the man has delusions of grandeur, and the recent report about his office viewing a letter warning of climate change as a threat against Pruitt shows a disconnect from reality. These are symptoms of psychosis and paranoia, and Ring of Fire’s Farron Cousins explains why Pruitt may be suffering from this mental illness.

I think I figured out what is wrong with Scott Pruitt, the director of the EPA. This past week it was revealed that the EPA deemed a postcard warning Scott Pruitt about climate change was a threat against Scott Pruitt himself. Here’s what that postcard had to say. It said in handwritten letters, “Dear Mr. Pruitt. Climate change is real. We’re watching you. For the sake of our planet, our children and our grandchildren, will you be a reasonable man? I repeat, we are watching you.” Now I understand to a degree how you could take that, “We are watching you,” as a threat, but also when you’re a person who is in the public spotlight and you say, “We’re watching you,” that also just means we’re watching what you do, not that we’re hiding in your bushes with binoculars spying on you every time you come in and out of the shower.

It would take a really psychotic mind to think that that is where it was going, but that is exactly what Scott Pruitt has. He has paranoid psychosis. He is suffering from a form of psychosis that is exhibited in his paranoia. That is why this man feels the need to have a 20 plus person security team around him at all times that cost the US taxpayers over $3 million in 2017 alone. That is why he wants to fly first class so he doesn’t have to be around the poor people who are overly affected by his policies. It’s because he suffers from this psychosis.

Now, here’s what I’ve learned about this form of psychosis. Here it is. “Psychosis is characterized by an impaired relationship with reality.” Sounds like Pruitt, right? Guy that denies climate change exists in spite of all the evidence. “It’s a symptom of serious mental disorders. People who are experiencing psychosis may have either hallucinations or delusions.” Now, the delusions part is what applies to Scott Pruitt. Here’s more of that. “The person experiencing psychosis may have thoughts that are contrary to actual evidence,” such as his denial of climate change and his belief that everybody is out to get him. “These thoughts are known as delusions. Some people with psychosis may also experience loss of motivation and social withdrawal.”

Now, that is another thing that we’ve seen Pruitt do because he wants to be in first class. He wants to be away from the crowd of people in the private area. He built a, what, $40,000 sound proof phone booth to isolate himself. Continues, “A delusion is a false belief or impression that is firmly held even though it’s contradicted by reality and what is commonly considered true. There are delusions of paranoia, grandiose delusions and somatic delusions.” Scott Pruitt’s entire tenure as EPA director has been marked by delusions of grandeur. This man thinks he is more important than he actually is.

That’s why everybody’s out to get him. In reality nobody’s out to get him. Everybody just wants to see him take care of the environment, which is literally his job right now. Yet he seemed more concerned with packing his agency with industry insiders, kowtowing the fossil fuel administration line, fossil fuel industry, excuse me, and ignoring the environment. He’s repealing all these things from the Obama administration, making our water dirtier, our air dirtier, and everything in between, and he thinks that people are out to get him. Nobody’s trying to get you Mr. Pruitt. But I think what you need to get is very serious, very extraneous mental health. At least an evaluation because something is not right with you if you believe that everyone in this country is out to get you in spite of the fact that there is no evidence whatsoever to support it.