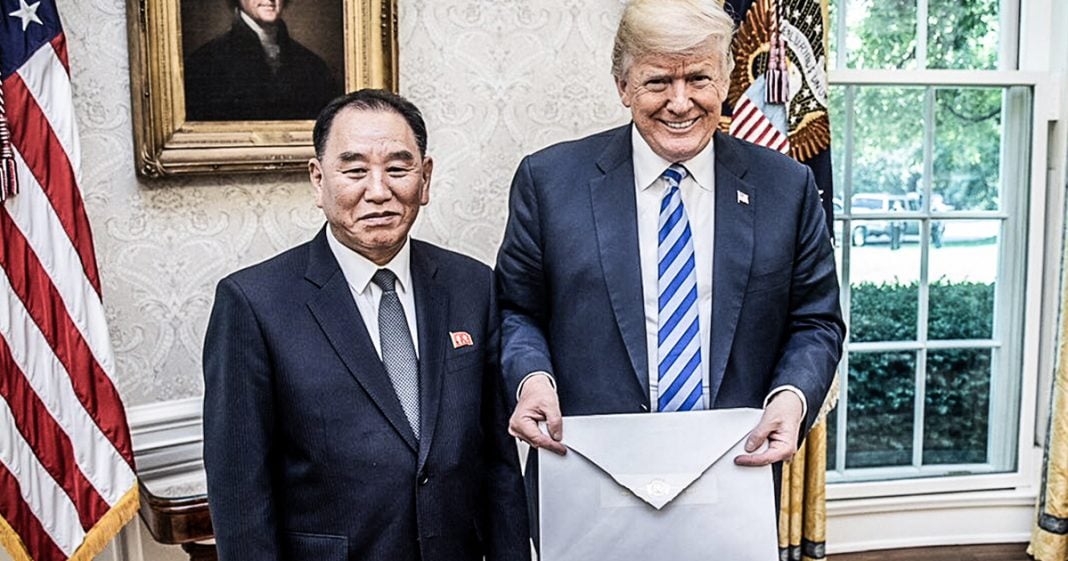 Donald Trump is always the first to launch an attack whenever he feels that he has been slighted, but he’s also incredibly slow to pick up on nuanced attacks, and that’s exactly what North Korea did this past week. By delivering an over-sized novelty envelope containing a letter from Kim Jong Un, they were effectively mocking Trump for his “tiny hands” for the world to see. Ring of Fire’s Farron Cousins discusses this.

On Friday afternoon officials from North Korea delivered a letter to Donald Trump from supreme leader Kim Jong Un, that was basically explaining what was gonna happen in the meeting, what they wanted, blah blah blah. The contents of the letter are not important whatsoever. What is important is the fact that after this Donald Trump said, “Hey the June 12th meeting is back on.” Even though everybody in his administration had already said that since it had been canceled, even if he wanted to do it June 12th, at this point there’s no way that could happen because they don’t have anything set up because it had been canceled by Trump.

Nonetheless, Donald Trump says it’s back on, he wants to meet with Kim Jong Un, he’s super excited about it, he gave him a nice letter, and then he admitted eight minutes later he never read the letter. Maybe he’s read it at this point, maybe he hasn’t, but again, totally beside the point.

What happened when Donald Trump received that letter was exactly what Kim Jong Un wanted to happen. North Korea absolutely trolled Donald Trump spectacularly by handing him this giant oversized letter and mocking his tiny hands. Or at least, playing off the theme that Trump has tiny hands that we heard throughout the campaign. That’s what this was all about, and Donald Trump wants to go out there and praise this man for keeping the appointment, wanting to go to the meeting, wanting to make concessions that the CIA already said he’s not gonna make. Trump is playing right into North Korea’s hand. And he doesn’t even realize that they’re mocking him in front of the entire world.

Trump is the kind of guy who any time he senses the slightest little bit of attack from somebody, he immediately goes on the counter attack and will not relent ever, really. But in a much more nuanced attack, Donald Trump isn’t even smart enough to realize that they’re playing him. And it’s not just with the big giant letter, they have been playing him from the start. That is why no other US presidents would meet with the leaders from North Korea, because they didn’t wanna legitimize them. They knew that they were fraudulent, they knew that they were brutal dictators, and they were not gonna take the time out of their lives to put them on the same stage as equals with the President of the United States.

Donald Trump doesn’t get it, and that’s why he wants this meeting to happen. To be honest, he probably admires Kim Jong Un a little bit. We’ve seen recently with Donald Trump’s increasingly, shall we say, potentially illegal expansion of presidential powers, that he wants more than what the office of the presidency has to offer. He wants what North Korea has for himself. And Kim Jong Un knows that, most of the American public understands that at this point. The only question is how much damage is this man gonna do to the office of the presidency by sitting down with this dictator who has destroyed the lives of countless people in his own country, just because he wants expanded power? That’s what Trump is trying to do here.

So yeah, it would make sense for these two to meet, but it’s not gonna bring North Korea up to everybody else’s level, it’s gonna take the US down to theirs.