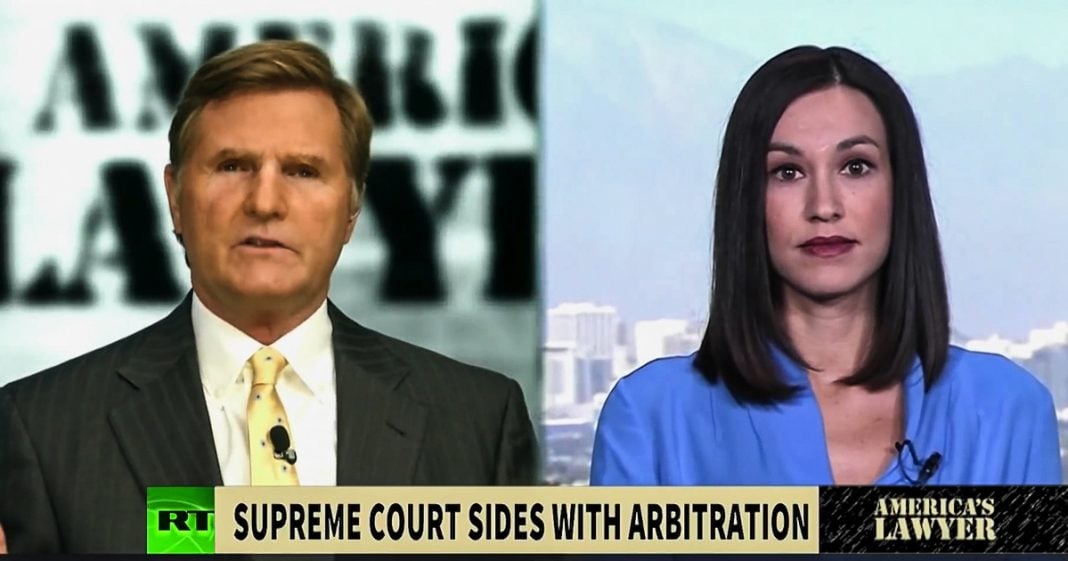 Via America’s Lawyer: Mike Papantonio and Brigida Santos discuss a decision for the case of EPIC SYSTEMS versus LEWIS that was handed down by the Supreme Court, which dealt a huge blow to workers in the U.S when it sided with arbitration.

Mike Papantonio: Last week, a decision for the case of Epic Systems versus Lewis was handed down by the Supreme Court, and it dealt a huge blow to workers in the United States. The case dealt with whether or not employees have the right to join class action lawsuits if their employers were stealing wages from them, or if they had to fight it out in private arbitration, that’s what the Supreme Court says they have to do now.

The Supreme Court sided with arbitration because they know it is so pro-corporate. To put it in its simplest terms, forced arbitration, which millions of Americans have already agreed to by signing arbitration clauses and contracts, takes away the rights of consumers and workers to sue corporations when they lie, cheat, and steal. There are arbitration clauses in your credit card contracts, your cell phone plans, your car and mortgage loans. The list goes on and on as more corporations are making sure that they get a legal advantage over you if they ever find themselves in trouble.

Unless you’re a board member of one of these corporations, there’s virtually no way that these arbitration clauses benefit you at all. And even if a consumer’s willing to jump through the countless hoops that corporations put in place, studies have shown that businesses win in arbitration against consumers more than 90% of the time. The deck has been stacked against American consumers, but that’s only part of the story with this case. The other issues we have to deal with is the growing problem of corporate wage theft, but in the eyes of the US Supreme Court right now, both wage theft and forced arbitration apparently are perfectly fine.

Joining me now to talk about this recent court ruling is RT correspondent Brigida Santos. Brigida, start by telling us about the Supreme Court case. What happened up there?

Brigida Santos: Well, as you said, the Supreme Court has now ruled in favor of big business. They have ruled that employers can now require employees to sign arbitration agreements that ban them from suing as a group or suing in a class action lawsuit. So this is a huge win for businesses, which will now hold all the cards when it comes to employment, and a huge loss for employees.

Now, the biggest problem with this is that employers increasingly slip these arbitration agreements into their contracts for employment. So if you’re seeking a job, you will now likely have no choice but to sign these bad agreements, even if the terms are against you, because the only way to opt-out is to opt-out of the employment opportunity altogether, and that’s just something that people simply can’t do.

Now, unfortunately, this ruling does make it incredibly easy for companies to now get away with broad sexual harassment, misconduct, wage theft, and unpaid overtime because employees now will have to go it alone and sue their employee by their selves. They will not be able to band together as a group and take them on with strength in numbers.

Mike Papantonio: To put that in terms of how people are going to be confronted with this, if a person has a loss, let’s say they have a loss of $5,000 because there’s some scam that Walmart or some other corporation has run on them where they’re taking … There’s actually wage theft. Let’s just use wage theft for example. So that person, for $5,000, can’t go out and hire a lawyer to go toe to toe with Walmart to get their money back. Walmart has their in-house lawyers, it doesn’t cost them anything. But the individual who’s lost $5,000 can’t go to an attorney and pay that attorney. I mean, the cost of just going to court, just the basic court cost would be somewhere around $10,000, and then add onto that so many other things. So it’s going to cost $20,000 for that individual to get their $5,000 back.

Used to be class actions. Before these nincompoops took it away, you would have class actions. Everybody could band together. You could go in one class, and you could figure out what the losses were. Walmart would have to pay into a fund. That fund would then pay each one of these people who’d been scammed. It would pay them back.

Brigida, what kind of scams are you seeing with corporations pulling off here? I mean, Walmart was one that comes to my mind where they had people working overtime, and they weren’t paying them for overtime. They would say, “Hey, can you throw in another 30 minutes or an hour? And by the way, we can’t pay you, but you like your job, so would you work that other hour?” That’s what we saw with Walmart.

Brigida Santos: Yes, and there are-

Mike Papantonio: What other scams have you seen?

Brigida Santos: There are so many wage theft scams, but I’ll give you another company that’s going to benefit greatly from this ruling here, and that’s Chipotle. Chipotle has been trying to prevent thousands of employees from suing them for wage theft is a class action lawsuit. Now, at least 10,000 people have joined that lawsuit saying that Chipotle forced them to work either before or after they clocked in or clocked out. Now, Chipotle before this SCOTUS ruling said that at least 3,000 of those workers had signed arbitration agreements preventing them from suing in a class action, but now this SCOTUS ruling is going to completely make it go away altogether. And Chipotle will be allowed to carry on stealing wages from employees who have rightfully worked for and earned those wages.

Mike Papantonio: Yeah. One scam that they use is they’ll take lunch … For example, somebody would have a lunch break, and they would say, “Do you mind working through the lunch break?” They’d work through the lunch break, and they wouldn’t be paid for that. Another scam that you would see is they would call these workers contractors. They’d say, “You’re really a contractor. You’re not entitled to an hourly wage.” So they would have them working well beyond a 40-hour work week only being paid for 40 hours. We handled one of the biggest cases against Walmart for this. The losses are predictable. The losses are going to be anywhere between $3,000 to $5,000 per worker, but if you have 500,000 workers out there, you make a lot of money by stealing from them, and that’s what they’re doing. We see it typically in a lot of the big box stores, but what kinds of workers are most at risk of having their wages stolen from them, Brigida?

Brigida Santos: Anyone is at risk if they have signed one of these arbitration agreements that bans class action lawsuits, but it’s really low-wage workers that are harmed the most because, as you said, they don’t have the money to go after the big machine. So they’re going to be the ones that are getting their wages stolen, and they just don’t have the money or the means to sue individually.

Mike Papantonio: Yeah, in the arbitration process … By the way, the latest statistic is that once the corporation moves that worker who they’ve stolen money from, it’s no different than going to their locker and taking out $5,000 per worker, but once they move that worker into an arbitration setting, the corporation wins 90% of the time. And the reason that happens is the arbitration is rigged in a system where the corporation decides who the arbitrators are. I mean, typically it’s going to be somebody working in the same industry, it’s going to be somebody who’s retired in management from the industry. They’re nothing but puppets for the corporation. And so unfortunately, the chances of the worker winning is almost next to nothing. What is your take on this rigged system as you’ve reviewed the stories that have been written about this?

Brigida Santos: I mean, it’s incredibly unfortunate. As you said, it is entirely rigged. In fact, in California, the National Arbitration Forum ruled in favor of businesses 94% of the time, and this is according to a study that overlooked these between 2003 and 2007. And because 90% of all arbitration clauses ban employees from engaging in class action lawsuits, people are increasingly going to have to go it alone, sue their employer by themself, which deters them. A lot of people are afraid that their employer is going to retaliate against them, and again, they just don’t have the means to sue them and take them on.

Mike Papantonio: Well, the statistics show that they will retaliate. It’s not just supposition. The numbers, you look at the history of these corporations, they absolutely target these people, who are simply doing one thing — they’re saying, “Corporation, you’ve stolen from me. You’ve stolen from my family. You’re already paying me minimum wages. You’ve stolen my minimum wage. I’m living paycheck to paycheck, and you’ve stolen $5,000.” When that employee does that, the statistics show the corporation then targets that employee and moves them out.

Brigida Santos: Yes. Consumers. The Supreme Court has also ruled that companies can sneak these class action waivers into arbitration clauses that we as consumers sign when we’re doing anything from buying a plane ticket to a computer or signing up for a credit card or even internet service. These really do incentivize bad behaviors by these big companies, which are now forcing consumers to sign away their rights to present anything in front of a jury and a trial that might prove that these companies are getting away with really bad predatory practices.

Mike Papantonio: The other part of the problem, Brigida, is that it’s destroyed American unions. I mean, what it is, it’s a race to the bottom. Okay. You have employees that they’re under the heavy thumb of a corporation. They’re having to say, “Okay, I got to work minimum wages. Yes, I give you permission to steal from me. Yes, I understand that I can’t do anything but arbitrate.” So there is an absolute rush to the bottom, and what that does is it affects union folks to where right now, the unions in the United States are at such great risk.

We want to say, “Oh, that happened just because of the Republicans.” I ask you, the Republicans led the charge, but if you will go back and take a real close look for whether or not the Democrats were with the workers anymore when it came down to push and shove on issues like wages and the right to protect the union. You’re not going to find much difference. And so arbitration is continuing that push to make unions virtually disappear, and I’m not seeing any really meaningful pushback from Democrats or Republicans.

So, in closing, I guess what’s happened here, Brigida, is workers, now that the Supreme Court have ruled this way, simply have to live with it, and there’s not much that they can do until we get a Supreme Court, which we might not get. I mean, another election of Trump and even one more appointment by Trump is going to change an entire generation of how workers are treated.

Brigida, thanks for joining me, okay?