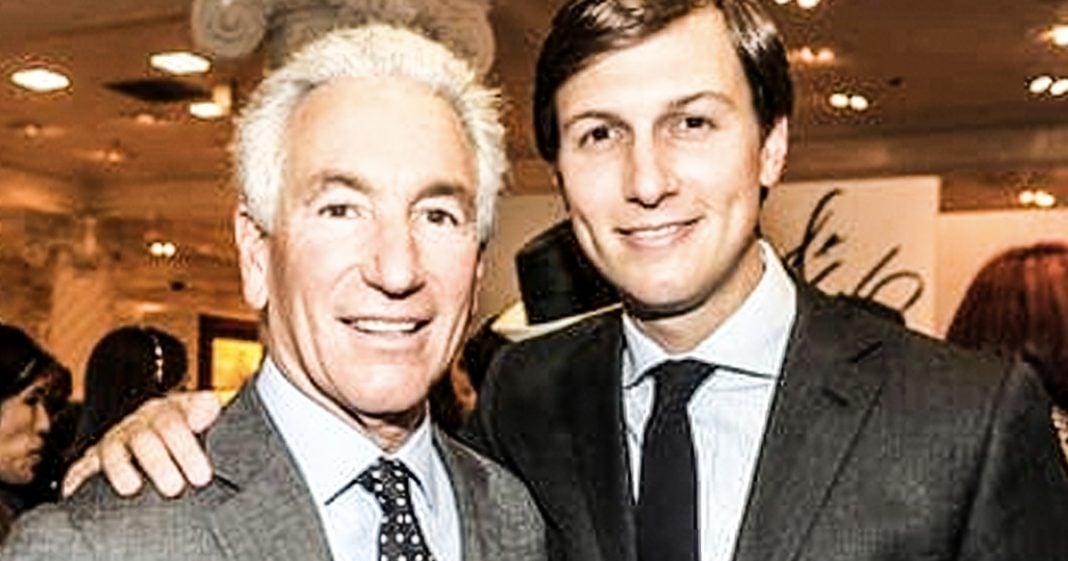 Charlie Kushner, father to Trump son-in-law Jared Kushner, said on Friday that the ethics watchdogs investigating his real estate deals and practices are a bunch of “jerks” who “can’t get a real job.” Kushner realizes that he’s in a lot of trouble, and it might be BACK to prison for him for the second time in his life. Ring of Fire’s Farron Cousins discusses this.

Charles Kushner, the father of Jared Kushner, who happens to be the son-in-law to the President of the United States had some very harsh words this past Friday for ethics watchdogs out there in the United States trying to hold companies and individuals accountable when they break the law or give the appearance of breaking the law.

Kushner said on Friday that these people are jerks and that they can’t get real jobs. There’s just a bunch of jerks out there in this country who I guess couldn’t find work anywhere else so they decided to go and become an ethics watchdog to hold people accountable when they commit crimes.

What a bunch of jerks, right? That’s exactly what you would expect from somebody like Charlie Kushner, a guy who already spent 14 months of his life in prison on counts of, I believe, campaign finance violations. There was attempted blackmail of his brother-in-law when he hired a prostitute to actually come and sleep with his brother-in-law and he was going to film it and use that to blackmail him against his sister, Kushner’s sister.

It’s a whole weird story about what Charlie Kushner has done throughout his life, but the guy is a criminal. He’s a convicted criminal so of course he would go out there and say that ethics watchdogs are jerks because he has no ethics to speak of. What he’s so mad about right now is that his company, Kushner Companies, along with Jared, is currently under investigation by several different organizations here in the United States. None of which, by the way, are independent ethics watchdogs, they’re all government offices that are investigating Kushner Companies.

You got the one in New York that’s actually looking into some shady real estate practices. They illegally kicked people out of a building by lying on their application form saying that they didn’t have any tenants and that none of the tenants that they actually did have were rent controlled. Both of those were lies, they falsified records, somebody is going down for that, Charlie.

Probably Jared since he’s the one who was really involved in that, but there’s a good chance you might go down too. You got the FBI investigation into Jared Kushner, you got the IRS looking into Kushner Companies as well, so again, it makes perfect sense why Charlie Kushner, a convicted felon, would be made at ethics watchdogs because he is the kind of guy who doesn’t seem to be able to run a business without also running a foul of the laws here in the United States.

Following the law is a very simple thing to do, like going about your day and not doing something illegal, that’s something that the majority of people in this country do every single day of their entire lives. Why would you be mad at the people who look over your shoulder just to make sure that you’re doing the right thing? My guess is because you know you’ve done some shady things in the past and you don’t want to get popped for it again and go and spend another 14 months or longer in prison like Charlie Kushner already has.