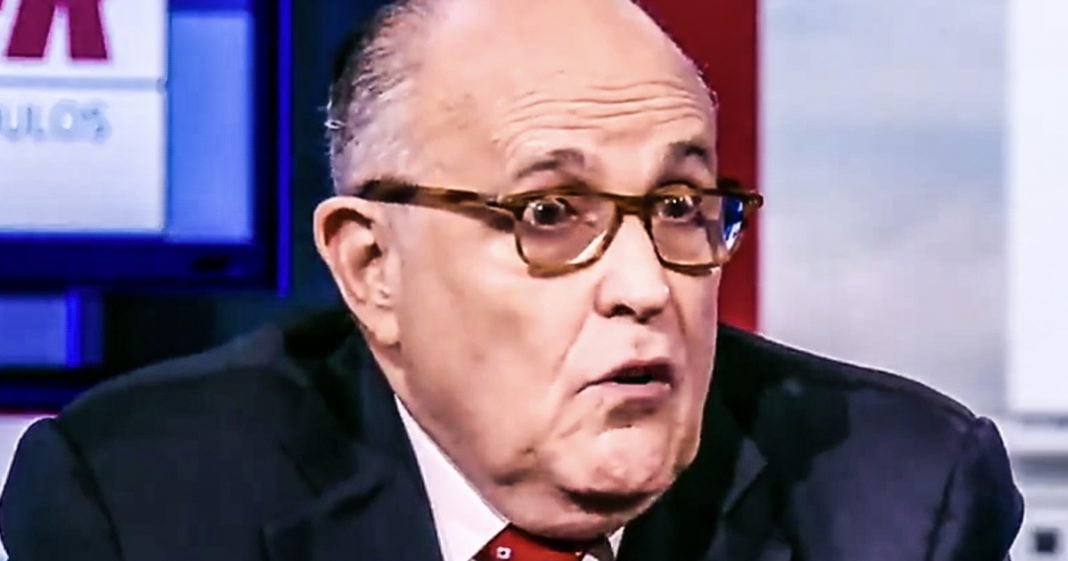 During an interview this weekend with ABC’s This Week, Trump lawyer Rudy Giuliani said that Donald Trump should absolutely not testify before a grand jury because their recollection keeps changing. What Giuliani means is that the administration is currently struggling to keep all of their lies in order, and they’d certainly be looking at perjury if the President testifies. Ring of Fire’s Farron Cousins discusses this.

Donald Trump’s lawyer Rudy Giuliani once again this past weekend decided to make the round on a couple of news shows and give us the latest examples of why he is one of the most incompetent attorneys in the United States. And as usual, he didn’t disappoint.

During an interview with ABC’s George Stephanopoulos on ABC’s This Week, Giuliani explained exactly why Donald Trump should not testify in front of a grand jury. Take a look at his rationale.

Later, Sarah Sanders said, “Well, wait, he sort of weighed in but he didn’t dictate it,” and now this letter from the president’s lawyers says very, very clearly he dictated this statement. How do you explain those shifting explanations?

Rudy Giuliani: Happened to me, with the whole situation of repaying the money that was laid out by Cohen, when the president first talked about, nobody focused on it. Nobody thought about it. That was a very busy time. And then when we got on board, I went through everything, it was the only change we had to make at this point, this other change had been made.

When you consider the big scope of this narrative, four or five-

George S.: It’s not a complicated thing. The president was there, he was dealing with the letter. It first was all denied and now you’re saying he dictated it. Right?

Rudy Giuliani: I don’t know that Jay … Jay would have to answer that, but I’ve talked to him about it. I think Jay was wrong. I mean, this is the reason you don’t let the president testify. Our recollection keeps changing or we’re not even asked a question and somebody makes an assumption.

In my case, I made an assumption. Then we corrected it and I got it right out as soon as it happened. I think that’s what happened here.

Okay, so that’s why you can’t do it, because your recollection of things just keeps changing. No. What Giuliani just admitted to was that the Trump administration is having trouble keeping track of all of their lies. They don’t know if everybody who’s already talked to the grand jury or Robert Mueller was on the same page with the current set of lies, so if Donald Trump goes in there and talks to anybody, he’s likely going to commit perjury because they don’t know if they kept everybody up to speed on all of the lies.

Recollection keeps changing? That’s not a thing, Giuliani. That’s not how memory works, and that’s not how the law works. You cannot use that as a viable legal defense to say that the president should not be able to testify in front of a grand jury. You just went on ABC News Sunday morning and admitted that the president keeps changing his story about everything, and this was actually in response to the fact that the Trump administration, Trump himself initially denied having any involvement with the Donald Trump Jr. letter to the New York Times about the Trump Tower meeting.

Then he said he had some input. And now it was revealed that he actually dictated that entire letter. That’s not recollection changing, that’s having to evolve your lie because you keep getting busted on it. If Donald Trump does testify, he will end up committing perjury. I don’t think anybody, including Trump’s own lawyers, would dispute that. That doesn’t mean that testifying is a perjury trap. That is the next logical step in this investigation. And if Donald Trump doesn’t want to do it, if he wants to fight a subpoena, should it come down, he’s gonna find out that the office of the presidency does not have as much power as he thinks it does.