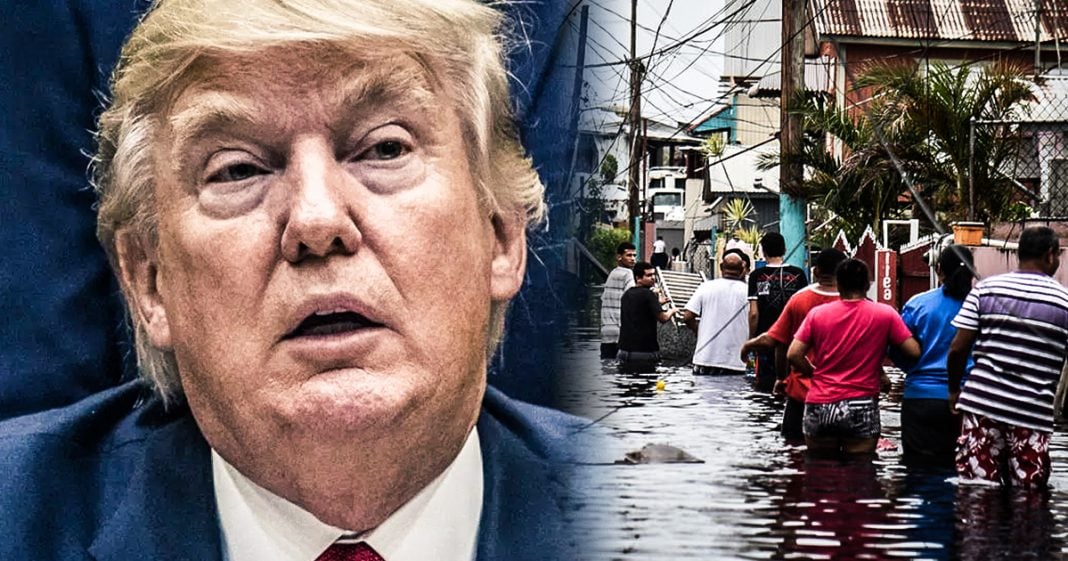 According to the federal government, 64 people in Puerto Rico died during Hurricane Maria. According to a new study in the New England Journal of Medicine, as many as 4,645 people died in Puerto Rico during Hurricane Maria. And, in fact, they even admit that that number could be up to 5,740 deaths for the tiny island that is a part of the United States. These are American citizens. So, the federal government, the Trump Administration, says that only 64 people died.

Donald Trump, when he went down to Puerto Rico back in October, at that time said the official death toll was 16 total people. He bragged about it. He told the people of Puerto Rico they should be proud that only 16 people died compared to the 1,800 who died in Hurricane Katrina so Maria was nothing. Here, here’s some paper towels and he throws them out into the crowd. Well, it turns out the federal government has under estimated those numbers and the real number is 70 times higher than what the Trump Administration wants us to believe. And again, these citizens of Puerto Rico, these are American citizens, okay, this isn’t just some island nation that maybe we should or shouldn’t send aid to; this is a part of this country. The government has an obligation to take care of them. And instead, they’re sitting here lying to us about how many people died in that horrific storm.

And you’d think that’d be as bad as it gets, wouldn’t you? Well, as it turns out, it’s actually much worse because the corporate media isn’t talking about this story. Right now, as of right this second, this study that shows this true death toll 70 times higher than what the federal government told us, has been covered by networks, ABC, or excuse me, MSNBC, CNN and Fox News for a grand total of 40 minutes split between those three networks. MSNBC wins. They covered it the most but they only talked about it for 21 minutes, which pales in comparison to what those networks gave just the Rosanne story this week. They’re more concerned talking about a white trash TV host than they are about all of the Americans who died in Puerto Rico during Hurricane Maria.

I understand you need ratings and that was a big story, right? Rosanne, everybody talked about it, we talked about it. But you also have to make room for real actual news. It can’t just be about the ratings, it can’t be about the advertising dollars. People tune into those networks because they want to know what’s going on in the world and I think, once again, this week we cannot trust the corporate media to give us accurate, actual, factual mattering stories here in the United States. This doesn’t work but, more importantly, the government’s response to Hurricane Maria in Puerto Rico doesn’t work. We lost more people in that hurricane than we lost during Hurricane Katrina, than we lost in 911 and yet the media and the Trump Administration just want to sit back and pretend that it didn’t even happen.