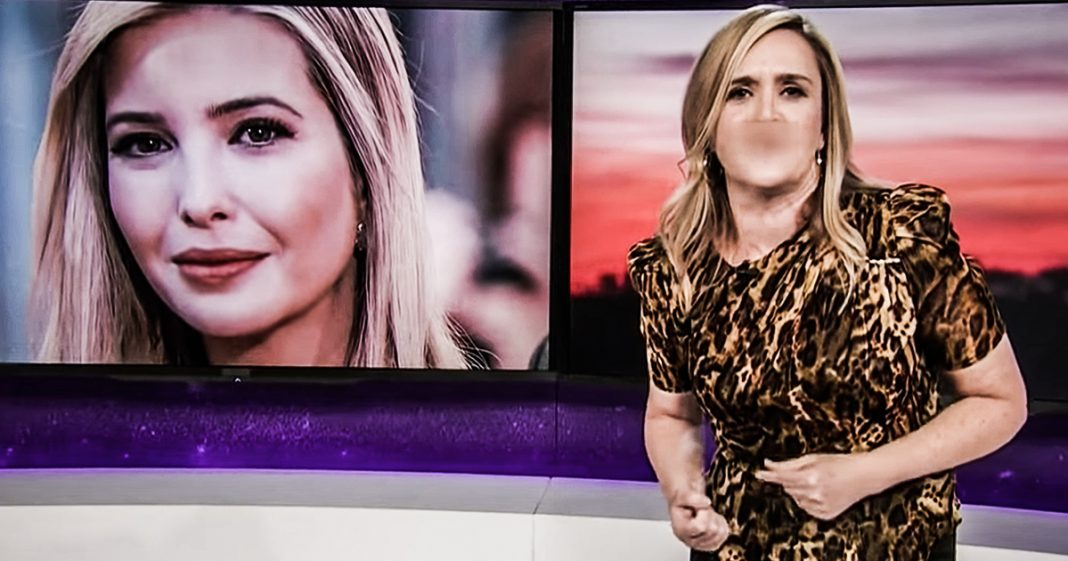 Full Frontal host Samantha Bee issued an apology to Ivanka Trump for calling her a name on her program this week, but that apology wasn’t enough for the White House. Donald Trump is calling on TBS to fire Bee and conservatives are rallying behind his calls. They need to remember all of the disgusting and vile insults that THEY threw around during Trump’s campaign (and even today.) Ring of Fire’s Farron Cousins discusses this.

This week, Samantha Bee, the host of Full Frontal on TBS, came under fire for comments that she made about Ivanka Trump. On a recent program, Samantha Bee was talking about the fact that Ivanka Trump posted a picture with her child and how loving and wonderful that was, while, at the same time, ignoring the fact that her father’s policies on immigration are to quite literally rip children out of the hands of their parents and then apparently just lose them in the process.

Samantha Bee referred to Ivanka Trump as a “feckless cunt.” Now, Samantha Bee, once the uproar started, she came out. She issued a video apology. She apologized on Twitter. She made it clear that she believes that she screwed up, that she used inappropriate language, that it harmed people, and she was not happy with herself. She apologized to everyone, said this is something that’s not going to happen again.

Here’s the thing. Even after that apology, which actually did sound sincere, unlike Roseanne’s apology, the White House … Friday morning, Donald Trump tweeted out the following. “Why aren’t they firing no-talent Samantha Bee for the horrible language used on her low-rating show, a total double standard, but that’s okay. We are winning and will be doing so for a long time to come.”

Donald Trump is echoing what a lot of conservatives are out there saying right now, that Samantha Bee should be fired for this vulgar language that she used to describe Ivanka Trump. Now, I don’t know if conservatives are aware of this or not, but there are actually plenty of photos online that you could easily find. We’ve got some we can show, as well, of conservatives wearing T-shirts referring to Hillary Clinton as a cunt. T-shirts that say, “Fuck your feelings.”

Now these same people, who say, “I don’t care about your feelings,” or “Hillary Clinton is” this horrible word, now they act like they have the right to be outraged because somebody else on the other side of the aisle used this language? Yeah, not how it works, not to mention the fact that Donald Trump himself has invited people like Ted Nugent into the White House, who also referred to Hillary Clinton as a cunt, as has Roseanne Barr, but Ted Nugent also threatened to murder Hillary Clinton and Barack Obama, and he gets an invite to the White House for his horrible language. Where’s the outrage there, folks?

The Republican Party has a massive double standard today that is just unbelievable hilarious, because they’re incapable of looking at their own side and seeing how disgusting they truly are. It’s like these people have never walked past a mirror to find out that they’re the ones, in fact, covered in mud right now. The reason that this whole crusade against Samantha Bee even started … Again, it all goes back to Roseanne being canceled, so these conservatives are mad that their white trash hero got her show canceled, so they’re doing everything in their power to get liberal hosts canceled, as well. Not going to work with Samantha Bee. She did issue her apology. TBS has accepted it. They have not shown any signs so far that she’s going to be fired.

She’s going to keep on doing what she does, because her voice is actually pretty vital right now. She is out there, and yes she uses humor to do it, but she’s actually telling stories that the rest of the media’s not even talking about. Yes, we do need Samantha Bee out there. Personally, I have no problem with the language that she used, although I’m glad she apologized. I know some people may have been offended, but okay, that happens. You don’t have to agree with the language somebody uses all the time, and I get that. Nonetheless, Samantha Bee is a vital voice out there. She may have, in her opinion, used the wrong word there, but when you’re talking about a policy that is to rip children away from their parents without ever knowing whether or not they’ll see them again, I think harsh language is fully justified.