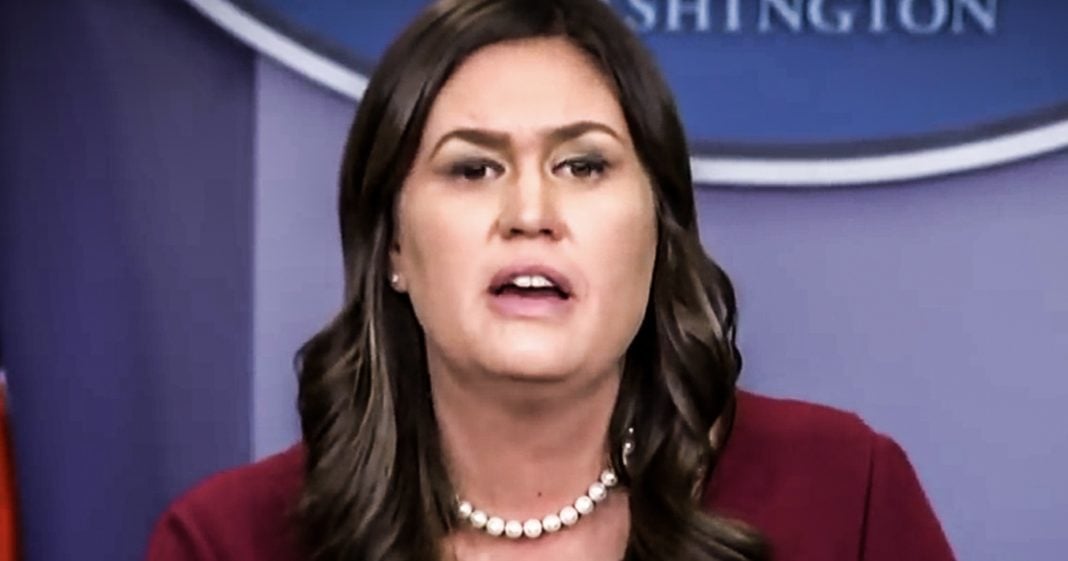 Sarah Huckabee Sanders did her best to choke back tears during Wednesday’s press briefing after a 13-year old student reporter from Time for Kids asked her a question about school safety. The reporter mentioned that his school recently performed a lockdown drill and wanted to know what this administration was going to do about the growing problem of violence in schools. Huckabee Sanders had a rare moment where she acted like a human being, but then immediately danced around the question. Ring of Fire’s Farron Cousins discusses this.

On Wednesday during the White House press briefing Sarah Huckabee Sanders actually had a very rare moment, probably the first we’ve seen from her, since becoming the press secretary for the White House where she actually responded as a normal human being would respond in a given situation.

Take a look at what happened and watch how emotional Sarah Huckabee Sanders gets when asked by a 13 year old junior reporter what her administration is doing about the issue of violence in our schools.

Sarah Huckabee Sanders:
The young colleague in the back.

Reporter:
Thanks for the compliment.

Sarah Huckabee Sanders:
Hopefully these aren’t as tough as bring your kids to work day questions.

Young Reporter:
At my school we recently had a lockdown drill. One thing that affects my other students mental health is to worry about the fact that we or our friends could get shot at school. Specifically, can you tell me what the administration has done and will do to prevent these senseless tragedies?

Sarah Huckabee Sanders:
I think that as a kid and certainly as a parent there is nothing that could be more terrifying for a kid to go to school and not feel safe. I’m sorry that you feel that way. This administration takes it seriously and the school safety commission that the president convened is meeting this week again in an official meeting to discuss the best ways forward and how we can do every single thing within our power to protect kids in our schools and to make them feel safe and make their parents feel good about dropping them off.

She came very close right there, very close, to actually acting like a normal, rational, emotional human being. But then immediately choked back those tears, gave up on that human response and gave this 13 year old reporter a nonsensical dancing around the issue actual answer. Said, “Oh, the administration, yeah, we’re going to meet later this week and talk about it,” and, “We want you to feel safe. We want your parents to feel safe for you.”

Guess what Sarah? That’s not working. This kid understands it, as do millions of kids in public schools all across this country, and private schools too. They have to go through these lockdown drills. They have to be taught what to do in the event of somebody coming in that school with the intent to murder them.

I have had to talk with my own kids who were in elementary school about what to do in those situations. That’s not a conversation that we should have to have with our children, and yet we do because of the horrible policies of people in Washington D.C.