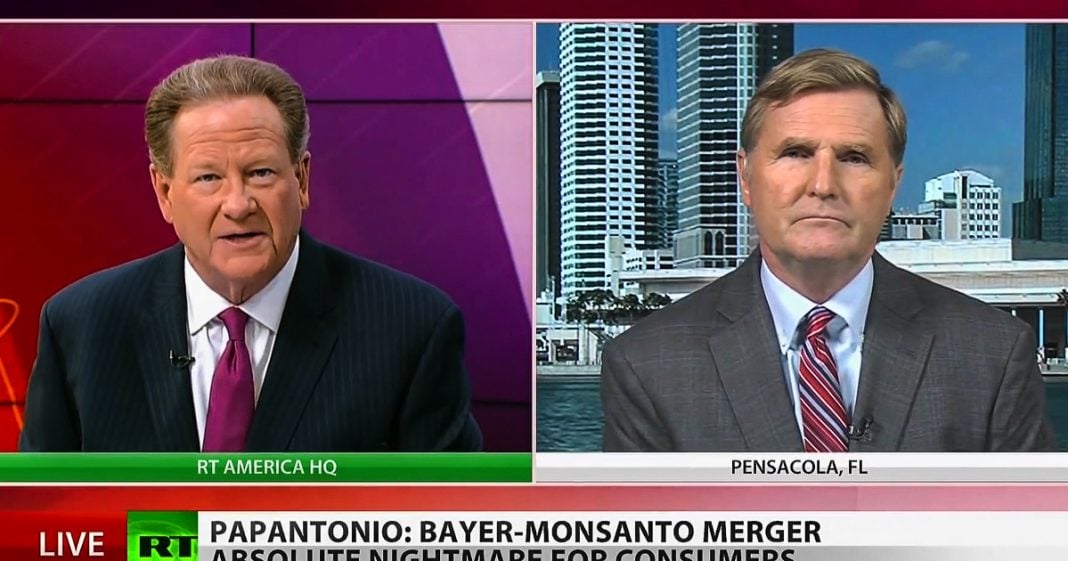 Via RT America: Bayer has won approval for its plan to purchase agriculture giant Monsanto. The company agreed to sell off close to $9 billion in assets to make way for the $62.5 billion merger. Bayer’s sell-off of assets will be the largest divestiture ever in the United States. Shares in Bayer have jumped close to three percent following the announcement. Host of America’s Lawyer Mike Papantonio joins Ed Schultz to discuss.

Ed Schultz: Bayer was won approval for its plan to purchase agricultural giant, Monsanto, and it is a whopper. The company agreed to sell off close to $9 billion in assets to make way for a $62.5 billion merger. Bayer’s sell off of assets will be the largest divestiture ever in the United States. Shares in Bayer have jumped close to 3% following the announcement.

For more on this, we’re joined tonight by host of America’s Lawyer, Mike Papantonio. Mike, always a pleasure. Great to have you with us tonight. You have done excellent documentation on Monsanto. They have not been a good player to the environment. What does this deal mean?

Mike Papantonio: Well, actually, I’ve been toe-to-toe with Bayer and Monsanto with just about the same amount. Look, this is a disaster for consumers. It’s great for Wall Street. They need to be having … breaking out the champagne on Wall Street. Together, these two companies have been sued probably more than any two other companies with the exception of Dow and DuPont who did their merger together recently. These two companies in the past have been charged with price fixing, negligence, environment destruction, contamination.

In the 1980s, I handled the … Well, I handled the case actually into the ’90s where Bayer was actually sending blood tainted with AIDS virus to African countries. After they took it off the market in the United States, they went ahead and sent it to hemophiliacs over in Africa, Asia, and South America knowing. It was called Factor VIII. But it gives you a sense of what these companies are about.

There’s no question in my mind that this corporate merger is really just two massively corrupt companies joining to rip off American consumers. That’s what’s going to happen.

Ed Schultz: So, this is just a major lobbying effort to make sure it happens. Why would the United States government allow this to go forward if they’ve been such bad players?

Mike Papantonio: Well, I mean, the truth is, when it comes to decisions like this, consumer issues don’t matter anymore. This is an extension of NAFTA and CAFTA and what would have been TPP if Hillary Clinton had been elected. For example, the Justice Department is making Bayer, for example, sell off their seed and herbicide holdings. It doesn’t mean anything. It sounds great, but it doesn’t mean anything. Both of those businesses are going to be sold to a German company called BASF, so there isn’t going to be any additional competition or variety available in the market. The DOJ knows this. I mean, it’s not just me talking. They have enough sense to understand this.

This is a train wreck. The DOJ can dress it up however they want. Say, “You know, we really looked at this.” They didn’t look at a thing. All they looked at was is Wall Street happy about this? We’re going to see more cases come out of this and they just become such a giant that it makes it difficult. We’ve been going toe-to-toe with Monsanto and Bayer for decades, case after case. It’s not going to change what we do. But out there, the consumers are going to be more and more of a victim as we see these types of mergers take place like DuPont and Dow, and now Bayer and Monsanto.

Ed Schultz: Quickly, moving forward, with Bayer this powerful, do you expect their culture to change at all or get worse?

Mike Papantonio: No, it’s going to get worse. I mean, the truth is, when you look at the … The advantage I have, Ed, is I actually read the documents. When I take a deposition or try a case, I actually get to see the documents. I get to see the mindset of this culture. I got to tell you, the mindset of this culture is frightening to begin with. Individually, Bayer and Monsanto, it’s frightening individually. But you put those two minds together, and something ugly is going to happen to consumers all across the globe.