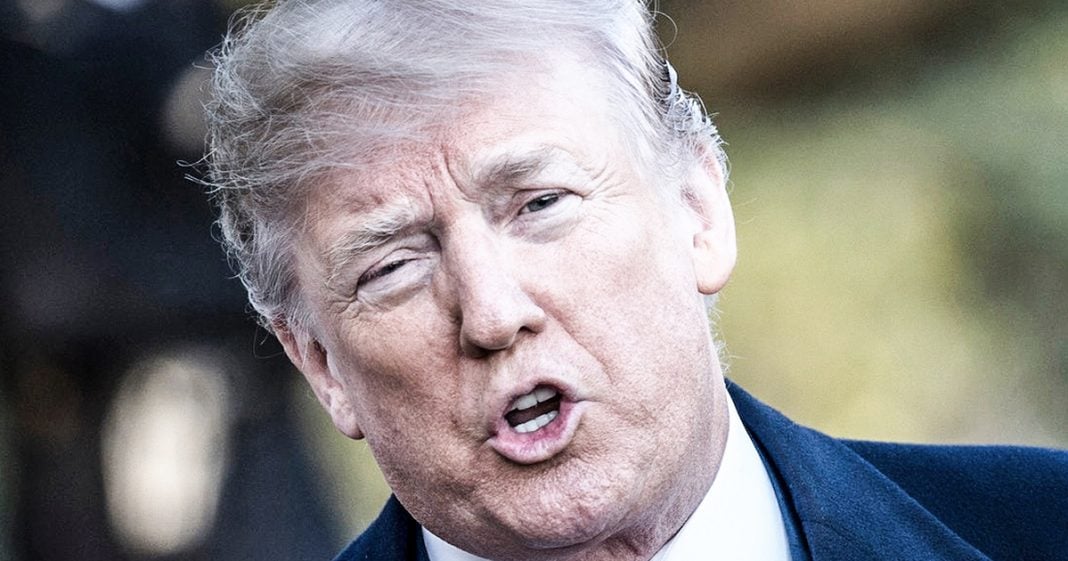 Leaking classified intelligence is a federal crime, but that didn’t stop President Trump from divulging sensitive classified intelligence to a room of his top donors in Manhattan last week. The information leaked, which was about a classified military operation in Syria back in February, was so sensitive that the White House communications team couldn’t even comment about Trump’s comments. Ring of Fire’s Farron Cousins discusses this.

For the last several weeks, we know that Donald Trump has been furious with staffers inside the White House, trying to figure out who the leaker is. Well, as it turns out, the leaker is most likely Donald Trump. Last week, at a fundraising dinner in Manhattan, Donald Trump actually leaked classified information to his donors.

Here’s what happened. Donald Trump gets up onstage to talk to about 100 people who paid at least $50,000 apiece to go to this little Donald Trump fundraising dinner, and he told them about a military excursion from back in February, where U.S. troops went in and killed anywhere between two and four hundred Syrian rebels and Russian mercenaries. This operation was highly classified. The reason it was classified is because national security experts did not want Russia to know that we went out there and killed Russians. They didn’t want to create any bad will between the two countries, who were already on a very rocky footing at this point, and it was classified. Donald Trump went out there to his wealthy donors and leaked that classified information.

Here’s how secret that information actually is. When a White House spokesperson, Raj Shah, was asked about Donald Trump’s comments at this fundraiser, Shah had to admit that he is not allowed to talk about it because that information is classified. Even he admits that, “Yes, this was classified, and even though the president said it publicly, I can’t go out there and even comment on it because of how secret it actually is.”

Leaking classified info is a crime. That is something that people go to jail for. We know that, and yet Donald Trump just did it openly during a fundraiser in Manhattan, and nothing is going to happen to him. His supporters are not even going to think that this is an important story that anybody should be talking about. To be honest, maybe it’s not, but maybe it is. Because if you have a president who cannot stop himself from going out there and leaking classified information, what can you trust him with? There are all kinds of secrets that the federal government has, and some of them, they should rightfully keep secret.

Now that we have an imbecile like Donald Trump in the Oval Office with access to every secret the United States has ever had, and he can’t even keep his mouth closed long enough to keep those secrets, that creates a very real national security problem here in the United States. Trump wanted to use that opportunity in Manhattan last week to brag about how strong his military is. Instead, he leaked classified information to roughly 100 people, any one of whom could have told someone else, and so on and so forth. It’s like that old World War Two poster. You know, “Loose lips sink ships”? Donald Trump doesn’t seem to have any problem with going out there and telling state secrets to people if he thinks it’s going to make him look a little bit better.