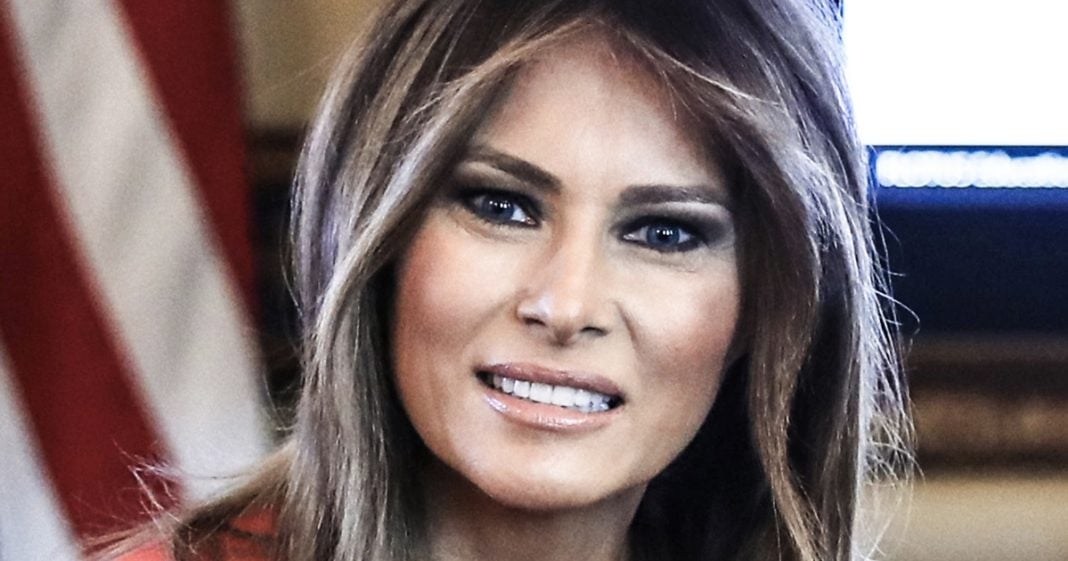 It has been 18 days since the public has gotten a glimpse of Melania Trump which is rather unusual for a First Lady. And even though her absence is likely nothing to worry about, that hasn’t stopped the wild conspiracy theories on social media from taking hold. And with the White House refusing to comment on Melania, things are only getting stranger. Ring of Fire’s Farron Cousins discusses this.

It has, at this moment, been a little over two weeks since Melanie Trump was seen in public. So we’re talking about a little over, I believe, 18 days, as of right now, since anyone in this country really has seen Melania Trump. And as a result of Melania’s alleged disappearance, conspiracy theories online and social media are going absolutely nuts.

Some people are suggesting that Melania Trump may have actually had plastic surgery and she needs time to recover. So the cover story that they’re saying was that, when she went in for that benign kidney infection, as the White House said, it was actually plastic surgery, which would explain why she was there for five days instead of a procedure that would’ve allowed her to actually leave that same day if not the following morning. That is, at most, a one day procedure, but she ended up staying there for five days.

Another conspiracy theory floating around out there is that she’s actually cooperating with Special Counsel Robert Mueller. Another is that she’s moved back to New York because she doesn’t want to be around Trump anymore. Some people have suggested that perhaps she used that sinkhole to escape from the White House, or that she was actually rounded up by ICE because Donald Trump is just that hard against immigrants in the United States.

So let’s get something out of the way. None of this is true. I don’t think any of these things happened. I think Melania’s disappearance is completely innocuous. She doesn’t like her new job. She didn’t want to be a part of it. She doesn’t like going out and being seen by the media. She is a private person, so she’s just not going out and doing things. She wasn’t present at the Memorial Day wreath laying at Arlington National Cemetery, which is something that past first ladies do attend with the President of the United States. She did not go to that, which, again, that is a little suspicious, but she doesn’t like her job, and I think that’s the simplest explanation here.

She didn’t ever want to be a part of this. We know that, and now she has no choice but to be this very public person. So, I don’t think any of these conspiracy theories are true. I don’t think anything has happened to Melania. I don’t think she’s escaped. I don’t think she’s working with Mueller, and I certainly don’t think she was rounded up by ICE, or that she had plastic surgery. I think what’s happening is that Melania Trump is growing sick and tired of the media looking at her, wanting her to do great things, when all she wants to do is basically nothing. And to be honest, there’s nothing wrong with that.

She has a horrible husband, who is constantly out there undermining her entire Be Best campaign, so she probably does feel a little useless. She probably does feel a little trapped, because there is nothing that this woman can do at this point to basically show the world that she is not as horrible as her husband, or that she takes the issue of cyber bullying seriously.

So, she retreats. She stays in the White House. She doesn’t talk to people; she doesn’t talk to the press. She’s not making any public appearances because the best thing she thinks she can do at this point is distance herself from her disgusting husband, and, to be honest, I can’t disagree with her on that.