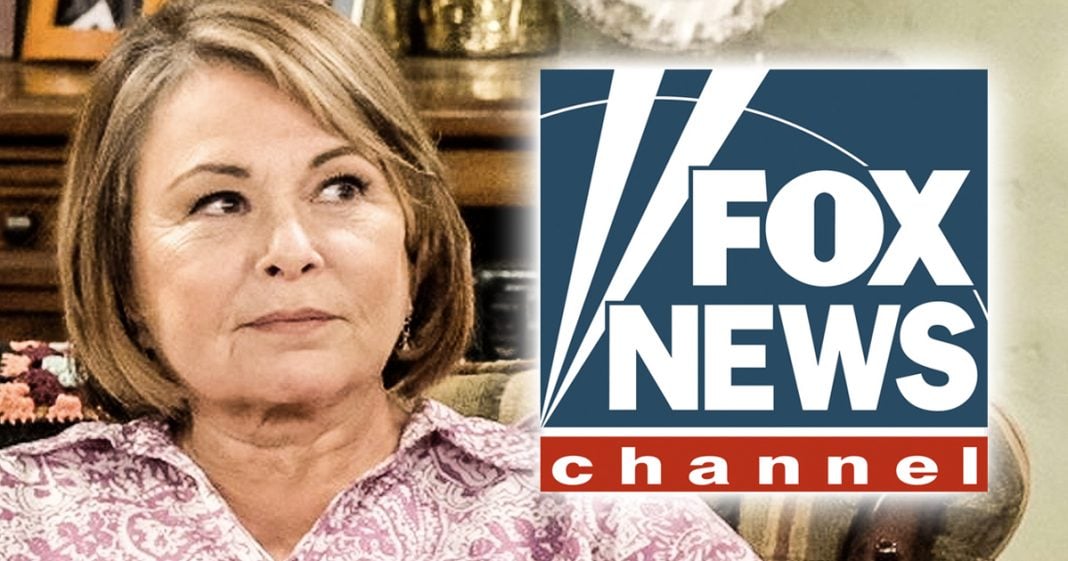 Fox News hosts on Tuesday wasted no time coming to the defense of fellow Trump supporter Roseanne Barr after she was fired from her hit ABC show after tweeting racially charged statements about a former Obama advisor. They claimed that her 1st Amendment rights were violated, but this just shows that Fox has no idea what the First Amendment is really about. Ring of Fire’s Farron Cousins discusses this.

On Tuesday, not long after sending out a highly racist tweet, Roseanne Barr’s show on ABC was canceled. And almost immediately, the folks over at Fox News rushed in to defend Roseanne. Take a look.

Harris Faulkner: So let’s stay on topic here Jessica, because what this also is, and while I hear what you’re saying, I don’t understand it to be anything other than free speech. She’s saying, and it is extremely offensive, but it is just that. And she says in one of her tweets, there were three rapid fire today, where she said well, it was a joke, it was a miscalculated joke.

Jessica Tarlov: And she is a comedian, she does have a very wicked twisted sense of humor, everybody knows her to be a little raunchy, a little rough. So, you know, while I do agree it is freedom of speech, she should take in consideration that she has lit a fuse and she knows what she’s doing. Once you enter in people, you know, like Valerie Jarrett, somebody from the left, even somebody from the right, [crosstalk 00:00:58]. It’s just not right.

Okay, so there’s a lot to unpack here, but let’s start with the most obviously one. Let’s go with the first amendment. First and foremost the first amendment protects your right to say almost anything that you want to say. It does not however guarantee you that there are not going to be consequences from saying stupid or racist things like Roseanne did.

The government did not step in and silence her, so this is not a first amendment issue whatsoever, this is a private company, ABC Disney, that decided to terminate their relationship with her because her viewpoints, or the things she was saying publicly were not in line with the company’s values, and it offended at least half the country if not a little more than that.

And then, we have the comparisons that are being made between Roseanne being fired, and the NFL, because the same people that think NFL players should have to stand for the national anthem are the ones who think that Roseanne Barr just had her first amendment rights violated.

What I’m going to say to that is no, these are not similar things. One is a group of people who are exercising their first amendment rights to bring national attention to a very important social issue of our time. They’re being told that they cannot do that, a new rule has been instituted that limits their freedom of expression. Roseanne said something racist, the network got mad and fired her. Big difference between those two, and if you can’t see the difference, then there’s no bother even talking logic to you.

And then, later on in the day though, let’s talk about what happened to Fox News later. Shaun Hannity and several other hosts actually came out and attacked Roseanne for this. They went after her. They did not agree with the previous host’s comments defending Roseanne. And then, as a result of that, Fox News viewers got mad at people like Shaun Hannity and Shepherd Smith for not defending Roseanne. And now the Fox News viewers are accusing those Fox hosts of caving to political correctness.

Let’s get something straight here, this is not Roseanne’s first time being hugely racist on Twitter or social media. I mean let’s all remember the time that she dressed up as Hitler, pulling a tray of what she called burnt Jews out of the oven. I mean I would think that that picture alone would pretty much give ABC a warning sign that hey, maybe we shouldn’t go back and put this woman on the air. They knew what they were getting into, they knew the kind of controversy she could stir up, and they thought, at least at first, that it was going to be good for business. But Roseanne’s going to be Roseanne, and Roseanne is always going to be raunchy and horrible, just like she always has been. And, as we saw on Tuesday, that’s what eventually led to her being fired.