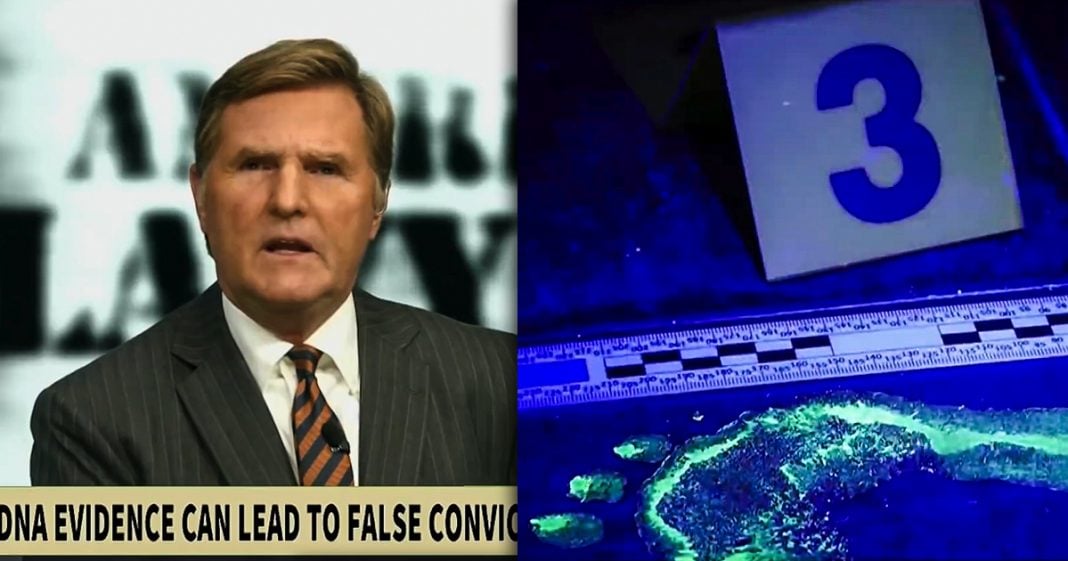 Via America’s Lawyer: Mike Papantonio and Brigida Santos talk about a report that says your DNA can appear in a crime scene you’ve never be in.

Mike Papantonio: Forensic science has helped law enforcement solve many crimes which, otherwise, would have remained a mystery, but as technology advances for collecting DNA samples at crime scene, so does the possibility of error. Experts in the field say that your DNA can be collected from a crime scene you’ve never even been at, and in the case of Lukis Anderson, it led to murder charges.

Joining me to talk about this is RT correspondent, Brigida Santos.

Brigida, let’s talk about the case of Lukis Anderson. How did his own DNA frame him for murder?

Brigida Santos: In 2012, a homeless alcoholic man named Lukis Anderson was charged with first degree murder when his DNA was found on the body of a murder victim who had been killed in a home invasion. Now, his DNA was specifically on the murder victim’s fingernails, and the way that they got there was through a process called secondary transfer. All that means is that, as humans, we leave our cells everywhere we go. In fact, we shed about 50 million skin cells per day, and those cells, or DNA, can then get picked up and moved around by a third party, so that’s all that means.

It turns out that on the nights of this murder, Lukis Anderson had been passed out drunk in a hospital, and he could not remember where he was that night, so, police, when they asked him about his whereabouts, he said he had no recollection. He also had a previous history and one conviction for a home invasion, and that’s how this man was murdered, so it did not look good for him, but his lawyer did retrace his steps, and she was able to find out that he was actually innocent of this crime and that he had never met the murder victim or even ever been to the crime scene.

Mike Papantonio: Brigida, what led investigators to question the DNA evidence that implicated Anderson in that crime? What was it about?

Brigida Santos: Anderson’s public defender, as she was building his defense, came across some files, including his medical records, and they proved that, on that night when the murder was taking place, he was in the hospital. Now, experts believe that his DNA, Anderson’s DNA, made its way onto the victim’s fingernails through some of the paramedics equipment, mostly likely through a finger oxygen reader that they had used on Anderson and then later on used on the victim.

Mike Papantonio: It was an Australian forensic scientist who first revealed that DNA could be collected from fingerprints, but he also cautioned everybody that you could collect DNA from items a person never touched. Who was this scientist and how did he prove that? What’s the significance of that?

Brigida Santos: The forensic scientist’s name is Roland van Oorschot, and he discovered this process of secondary transfer back in 1997 after conducting a series of experiments.

Now, in the experiment, he placed a jug of juice on a table. It had been sterilized previously, and he had a group of participants sitting around the table, each with their own glass to put the juice in, and all of those glasses were sterilized ahead of time, and what he found after swabbing everybody’s glasses and the jug and their hands was that one-third of participants had the DNA of other participants on their hands.

They also found foreign DNA on glasses, on the chairs, on the table from people who had nothing to do with the experiment and, because they had set the controls and sterilized everything beforehand, they realized that that DNA had been brought into the experiment by those participants through secondary transfer.

Mike Papantonio: One of the concerns that come up with this topic is the Rapid DNA Act of 2017. What does this law do and why is it concerning in so many levels?

Brigida Santos: The Rapid DNA Act allows law enforcement departments to now use Rapid DNA testing technology, which will allow them to find a match if somebody’s already in the system in about 90 minutes. Now, this is a process that normally used to take days, so this can speed it up very, very quickly.

Privacy advocates worry that this is going to increase invasive biometric collection with things like stop-and-spit policing where cops ask anybody they pull over to give them a sample of their DNA through their saliva, and this is something that has already been happening in places like Florida and in Connecticut, North Carolina and Pennsylvania and, because DNA is not infallible as we have seen with this Anderson case, privacy advocates worry that it’s going to cause a lot more people to be implicated in crimes that they may not have had anything to do with.

Mike Papantonio: The case of David Butler is another example of how DNA is believed to have convicted an innocent man of murder. Could you talk about that case just a little bit?

Brigida Santos: Back in 2011, David Butler, a cab driver, was charged with murder because his DNA was found on the victim’s body, a woman. Now, he had a skin condition that caused him to shed excessively and, in fact, in the community where he drove those cabs, other cab drivers gave him the nickname “Flaky” because his skin was always flaking off.

Now, he said that he had never met the victim, and his lawyer argued that it was very possible that he may have actually given a ride in his cab to the actual murderer and that’s how his DNA could have ended up on the victim’s body. Now, in this case, it was enough to get his sentence thrown out, so he was able to go free, and that is also what happened in the case of Lukis Anderson when their lawyers brought up the issue of secondary transfer.

Mike Papantonio: Scientists say that transferring of DNA is a phenomenon that has not been properly studied, and, as far as you can tell, is law enforcement aware of this, and what are the investigators in Anderson’s case saying after their experience?

Brigida Santos: It’s unclear whether law enforcement agencies are aware of the issue of secondary transfer. I do know that, in the United States, there are very few labs that actually studied the phenomenon of secondary transfer, but it is, indeed, a very real process, and it’s something that’s only now starting to be acknowledged, and it is the backbone, DNA, DNA is the backbone of so many convictions, and it’s very likely that other innocent people have been convicted for crimes that they didn’t commit, but it can also now be used as a defense by guilty people who may have committed crimes. If their DNA does get onto the bodies of someone, they can now say that it was secondary transfer, so, while it might clear up cases for some people, it could actually complicate others.