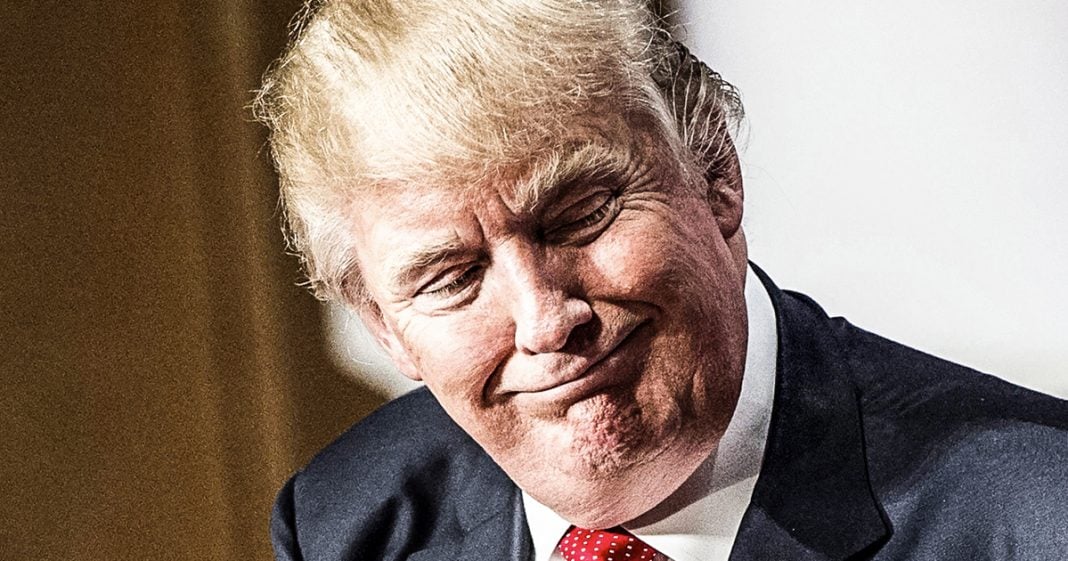 On Memorial Day, Donald Trump spent about half a second honoring fallen troops and then immediately pivoted back to himself in one of his most outrageous tweets. He claimed that the soldiers who died for this country would absolutely love his administration and how great the economy is doing under him. He immediately got slammed by both the left AND the right for being so callous, and Ring of Fire’s Farron Cousins discusses this.

Donald Trump decided to spend memorial day like he spends almost every other day. Making it all about himself. In a Tweet, sent out early Monday morning. That was I guess mean to honor, fallen soldiers on memorial day, which is what the entire day is for. Donald Trump said the following, “Happy memorial day. Those who died for our great country would be very happy, and proud at how well our country is doing today. Best economy in decades. Lowest unemployment numbers for blacks, and Hispanics ever, and women in 18 years. Rebuilding our military, and so much more.” Nice. Again, this was supposed to be a day of reverence. A day where we remember those who’ve fallen. Who gave their lives, in service of the United States military. For this country.

And Donald Trump, in one sentence. Managed to immediately pivot from honoring fallen soldiers, to talking about how awesome this country is today. And man, if those dead soldiers were still alive they would love, what was happening right now in Donald Trump’s America. Let’s think about that for a minute. Since he says they would love what’s happening right now. Let’s figure out whether or not they would. Again, these are people who died in service of this country. They gave the ultimate sacrifice. For the United States.

Would they be happy, with the fact that we have a president who his family, and other members of his administration were meeting with foreign officials, and diplomats during the campaign to undermine US democracy, and possibly illegally receive aide from foreign countries in order to win this election? I mean, do you think that’s what they’d be happy about? Would they be happy about the constant police brutality that we see in this country? Every day.

Would they be happy with the fact that the US government has lost 1500 migrant children? Would they be happy about the mass deportations? Or the hatred, and division that we see every single day in this country? That’s not what they [inaudible 00:02:08] and died for, and they damn sure didn’t fight and die, for a selfish, callous president. To go out there and make memorial day, all about him.

Now to their credit, many on the right actually did speak out against the president’s Tweet. Including, Ben Shapiro. A member of the so called intellectual dark web. Who Tweeted out, “This is not how you do it.” Other groups, veterans groups. Were very unhappy with Donald Trump’s Tweet. Essentially, everybody. Both sides. Left, and right. Were offended by what Donald Trump did, on memorial day. And they should be.

But it shouldn’t just be that Tweet either. He also throughout the day Tweeted about the alleged witch hunt. This morning, he said he was going to let the witch hunt go, because he has to focus on other things. And then he immediately kept Tweeting about it. Donald Trump’s Twitter Feed is a nonstop festival of self congratulation, and offensive lies. We should always, pay attention to what this idiot has to say. Because he is poisoning this democracy. That those soldiers who we honored on memorial day, fought and died for.