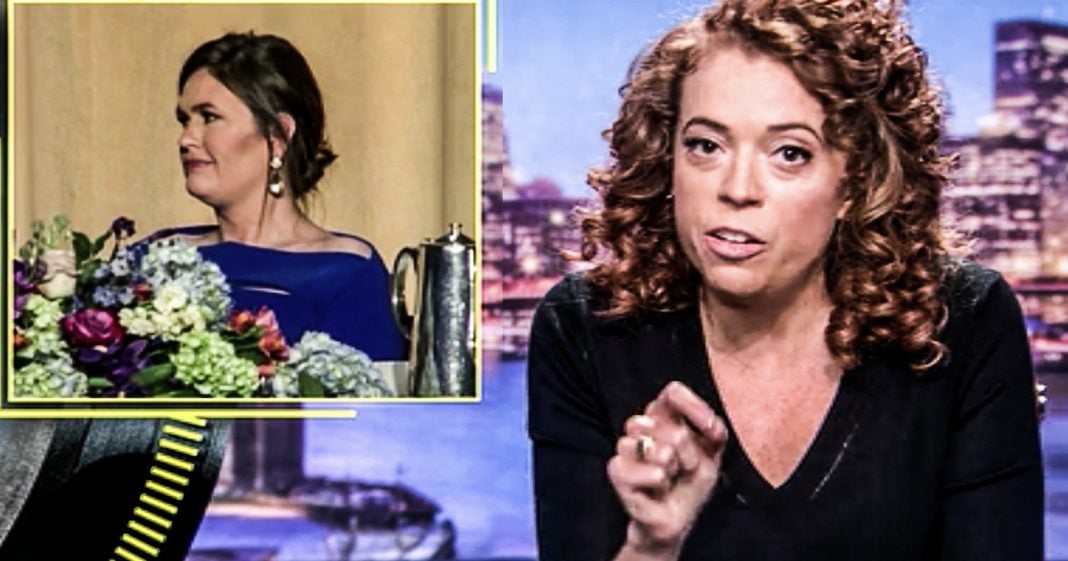 Comedian Michelle Wolf isn’t finished holding Sarah Huckabee Sanders for her nonstop lies, and during the first episode of her new Netflix show “The Break with Michelle Wolf”, she slammed Sanders for her hypocrisy and for being the “Mario Batali of personalities.” Ring of Fire’s Farron Cousins explains how Wolf’s method of attack has actually helped others to fight back against Huckabee Sanders’ lies.

On Sunday evening Michelle Wolfe launched a new show on Netflix called The Break with Michelle Wolfe. Most people obviously know Michelle Wolfe from her recent appearance at the White House Correspondent Center, where she ragged on Sarah Huckabee Sanders for being a constant liar, and also took a few jabs at Kellyanne Conway. There was massive backlash against that, and everybody thought she was insulting Sarah Huckabee Sanders’s looks, when in reality she was just talking about the fact that the woman can’t seem to stop lying.

So all in her inaugural episode of her new Netflix series Sunday night, she decided to take a few more jabs at Sarah Huckabee Sanders by saying that she is the Mario Batali of personality. Now, in case you’re not familiar, Mario Batali, celebrity chef, was recently hit with multiple sexual misconduct allegations, is now under a very serious investigation, and Michelle Wolfe compared Sarah Huckabee-Sanders’s personality of that of Batali, who’s a very nice and friendly guy in public and then a horrible human being, apparently, behind the scenes, which is what we get from Huckabee Sanders.

But if you have somebody like Sarah Huckabee Sanders, who goes out there and lies to the public every single day, or somebody like Gina Haspel, taking over the CIA even though she was a known torturer and helped spearhead the Bush Administration’s torture programs, they don’t have to support these people just because they are women. It’s not anybody’s job to be a cheerleader for another individual human being. If somebody is doing great and deserves praise, give it to them. But if they’re a horrible person, regardless of gender, race, sexuality or religion, call them out on it and hold them accountable.

Now, we have seen since that White House Correspondent’s dinner when Michelle Wolfe took a lot of heat for going after Huckabee Sanders, we’ve seen a conversational shift in how people deal with Sarah Huckabee Sanders. They’re now demanding that the media called her a liar, and called Donald Trump a liar. That wasn’t happening before Michelle Wolfe gave that speech at the correspondent’s dinner. She changed the conversation because she wasn’t afraid to call people out. That’s what she was telling us to do on her program Sunday night.