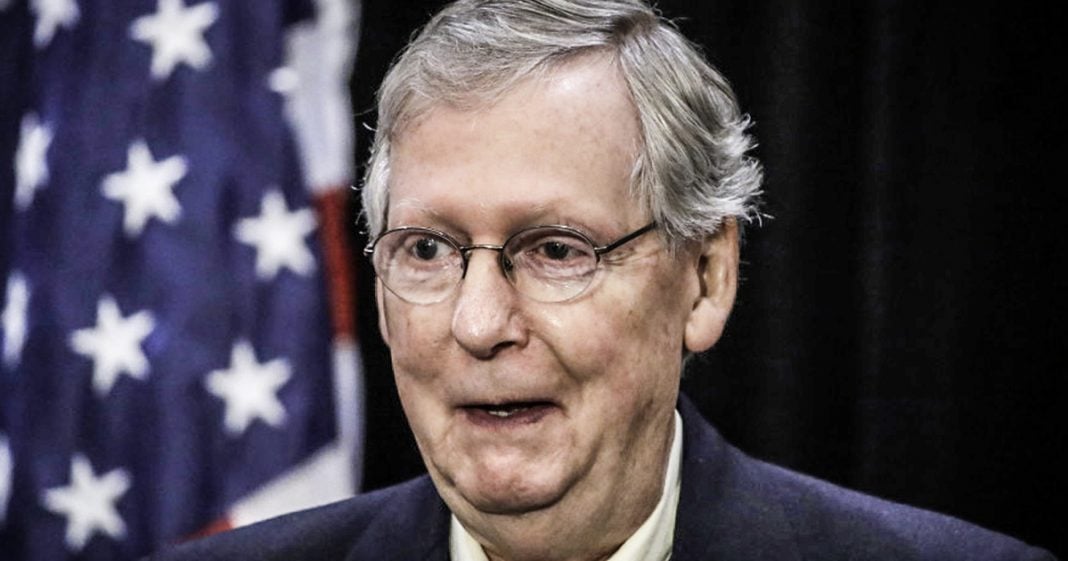 Last week, Mitch McConnell attended the classified intelligence briefings that the White House had called for, along with several other members of both the House and the Senate and members of the intelligence community, including Rod Rosenstein and Christopher Wray. After leaving the meeting, during which time they gave all the information about the alleged spy in the Trump campaign during the 2016 election, as well as giving them information about the basis for Robert Mueller’s investigation, Mitch McConnell left that meeting, gave an interview, in which he said, “I fully support these investigations that are currently going on including the Robert Mueller investigation and the DOJ investigation into possible collusion between Trump and the Russians.” After sitting through a meeting and seeing all the evidence that the rest of the public doesn’t get to see yet, Mitch McConnell emerged from that and said, “Yep. I support these investigations.”

How terrified must Donald Trump be right now? Well, I’ll tell you how terrified he is. He’s so terrified that he’s continuing to push this already debunked conspiracy theory that there was a spy placed within his campaign. We all know what happened now. We know that it was a guy from Cambridge University who used to work for Republicans who talked to a few people in the Trump administration just to kind of gauge whether or not they’d been compromised by foreign governments. That’s not really a spy. That’s just somebody making sure everyone on your staff is on the level. He didn’t even have any contact or questions about you.

But Mitch McConnell, hardcore Republican, right? He’s been the guy that’s going along with Trump the whole time. For him to leave a meeting where he finally got to see evidence as to why these investigations are taking place and then saying, “Yes. I fully support it,” that tells me, and it should tell everybody in this country, that there is obviously something there worth investigating. I do not believe for one second that Mitch McConnell went in there, saw the evidence was bogus, and then said, “Oh. Yeah, yeah. Keep doing this investigation.” If he thought this evidence was faulty or that it was untrue or that any of the intelligence was gathered improperly, he would have immediately called for these investigations to end, upon which other Republicans would have also called for the same thing. That hasn’t happened.

At this point, anyone calling for this Mueller investigation to end, anyone calling at a witch hunt, a hoax, or a distraction, or a diversion, clearly understands that information is going to come out that they do not want made public. Whether it’s within the Trump administration, whether it’s within the media, or whether it’s just within a political party, if you’re calling for this investigation to end prematurely, then obviously you’re terrified about what’s going to be found.

Mitch McConnell saw some of the evidence and he fully supports it. This isn’t a guy that’s been exactly going along with this investigation. He’s been a guy who’s been in Donald Trump’s pocket, much like Paul Ryan, but they both saw that investigation. Paul Ryan stayed quiet and Mitch McConnell reaffirmed his support for Robert Mueller. If I were Donald Trump, I’d be pretty scared right about now.