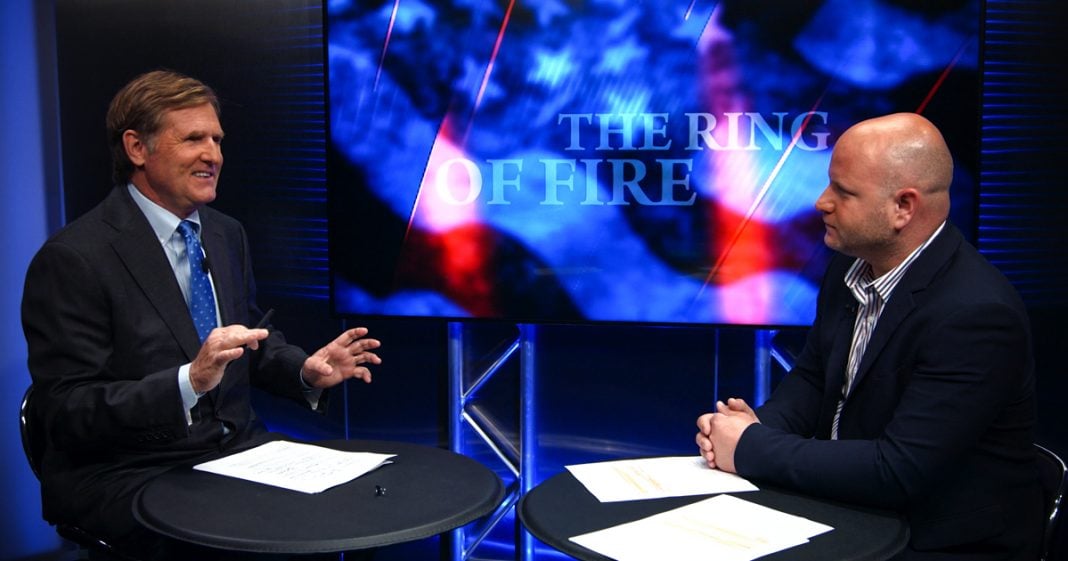 The state of Kentucky has taken the Republican War On Science to a new level with a recent law regarding Black Lung patients in the state. Ring of Fire’s Mike Papantonio and Farron Cousins discusses this.

Mike Papantonio: The state of Kentucky has taken the Republican war on science to a new level with a recent law regarding black lung patients in the state. What this case is about is there are, they have a handful of doctors in the state of Kentucky that the industry wants to have exclusive right on determining whether or not a worker has black lung disease. Clearly if you look at a differential diagnosis, what happens is doctors have these checklists that they use for what they call differential diagnosis.

The most important, the number one important issue is what does the radiograph look like? What does the x-ray look like? It’s call pneumoconiosis. It’s a broad type of disease, but there are people who are specialized in that. They’re certified specialists in reading radiographs; they’re called B Readers. And they have a system, in fact, that they’ve had for decades. I mean, this didn’t just happen yesterday. It’s been going on for seven decades where you have a system of ILO readers that put an x-ray up and diagnose is it asbestosis, is it some other kind of pneumoconiosis, is it black lung disease. They can tell by the scarring, they can tell by the way that the x-ray looks as far as the structure of the lung and where’s the scarring in the lung. So the Kentucky legislature that gets a ton of money from the coal industry there has been pushed into the idea that we don’t want real experts; we don’t really want specialists looking at this. We want these troll doctors that we’re pulling in because they work for us.

Farron Cousins: Absolutely, but you know, it can get struck down by the courts, but these people will never face any kind of comeuppance for voting in favor of this. This was a thing that was supported by both the Chamber of Commerce and the Kentucky Coal Association. They were the ones pushing this because they’re the ones who stand to gain the most from it. Yes, if you limit the number of doctors and the kinds of doctors — because now you can’t have those B Readers coming in and giving a diagnosis; it has to be a state-picked physician that meets whatever requirements the coal industry wants them to meet — you’re only going to have a few. So if you’re on this side of Kentucky and there’s no doctors over there, well you’re going to have to drive to the other side of the state to go one of these state-approved doctors. You’re going to have to wait a long time because there’s so few of them and so many black lung cases now. It’s doubled since the ’90s-

Farron Cousins: It is. And so limiting the doctors while increasing the number of instances is going to make backlogs. People could die waiting to getting it diagnosed.

Mike Papantonio: What’s the end result of that? The end result is the taxpayers end up taking care of these people. You see, the industry gets away with saying, well, it’s not black lung disease. It’s COPD, it’s some other type of pneumoconiosis, idiopathic pneumoconiosis, we don’t really know. So in the end, the company gets away with having to pay for that individual’s care, and taxpayers usually have to pick that up. They have to pick it up through Medicaid, all types of welfare mechanisms that have to end up taking care of that. So what it is, it’s externalizing, the company has externalized their risk. They’ve moved it away from their company into the seat of taxpayers again.

One in 14 — this is a staggering number — one in 14 coal miners that worked in a coal mine for more than 25 years are going to have black lung disease. It’s very distinctive. I’ve actually seen it on a radiograph, and when you look at the x-ray a ILO reader can show you exactly where the scars are, they can show you the nodules, they can show you the dark areas on the lung. It’s just right there.

It doesn’t even take … It’s not anything subjective. You understand what I’m saying? You put the x-ray up, it doesn’t take a subjective understanding of what’s happening there. Then you move into a CT scan if you have to. It’s even clearer. But here want their hand-picked doctors, who there aren’t even enough of them, to say well, no, this really isn’t black lung disease.

Farron Cousins: It’s really interesting, too, that we’re seeing this disease come back, make this massive comeback because we’ve got alternatives. It’s just you’ve got people like Kentucky Coal Association and Exxon and Chevron out there preventing us from being able to move on. I don’t think we’re going to see too many people in the wind industry develop some kind of wind disease. The same thing with solar. But here we are, we’re doubling down on coal and these fossil fuels, and people are dying because of it.

Mike Papantonio: During a meeting on contaminants this week, EPA Director Scott Pruitt’s security team actually shoved a female from the AP out of the meeting even though … And then a group of reporters were barred from coming in. Interesting thing is, they asked the administrator are reporters barred? “No, they’re not barred. We don’t have any room for them and we’re shoving them out of the room, but they’re really not barred.”

We know a lot about this issue, don’t we? This has to do with a case, this is a type of chemical that Scott Pruitt is trying to hide the dangers about because it’s basically in all of our bodies right now; it’s in our drinking water, it’s a C-8 variant. It’s a poly-carbon kind of product that we don’t really have any way to get out of our system once it’s in our system. And know, based on the cases that we tried, the C-8 cases that we tried up in Ohio, that it causes birth defects, it causes cancer, it causes blood diseases, it causes gastrointestinal diseases, probably causes neurological diseases. So this is what Scott Pruitt is trying to hide from the American public. He doesn’t want this to get out. He said if this gets out, it’s going to cause pandemonium.

Farron Cousins: And bad PR for the agency. We had discussed that last week because this issue’s only been on people’s radars for about a week now because they buried the initial report. So they’re like, “Okay, we’re going to have this meeting. Press, you can’t come in. Uh oh, here comes somebody.” Security guard grabs her by the shoulders and forces her out of the room, and she had said all she wanted to do at that point when she was going through security was just ask the EPA spokesperson why we can’t even come in.

Mike Papantonio: Here’s the real deal. EPA is responsible for this. I saw the documents. We tried five of these cases. We actually saw the documents where the EPA has known about this for decades and actually helped cover it up. And you see this movement from, say, DuPont or 3M, you see the movement from those companies where … One day they’re working for DuPont; the next day they’re working for the EPA. And those people that moved into those management situations have kept this a big secret. If Pruitt gets away with this, our democracy is lost, completely lost.