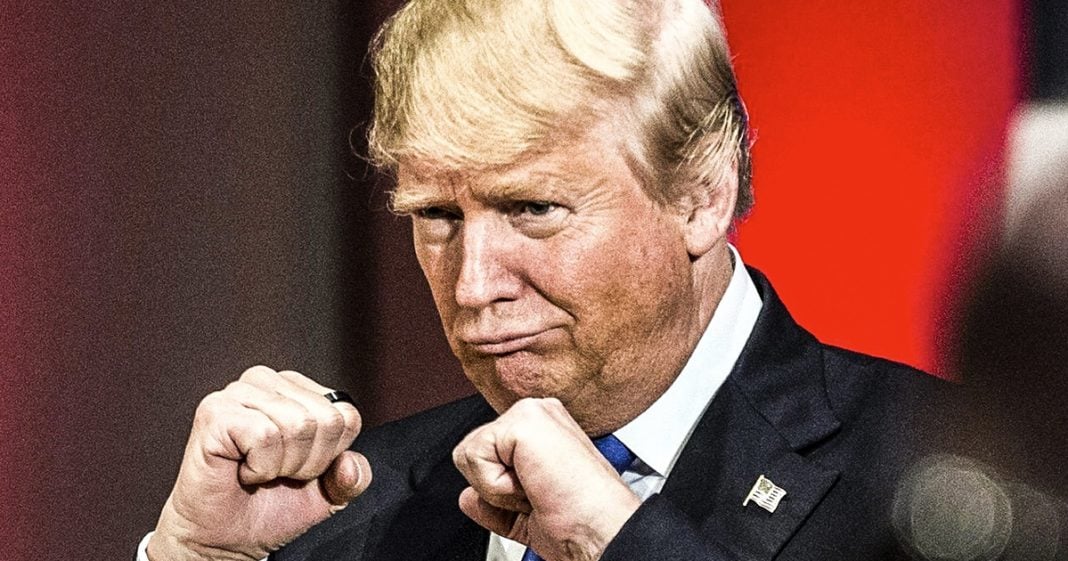 When you really think about the things that Donald Trump has said and done while President, you start to notice a pattern. Everyone he attacks is someone that has stood up to him, and everything he’s done has been to benefit himself either personally or financially. The man’s ego is far too fragile for him to be President, as Ring of Fire’s Farron Cousins explains.

Recently, CNN ran an op-ed titled Men With Fragile Egos Should Not Have the World’s Faith Placed in Them. You can actually find the link in the description of this video if you want to go read it yourself. The article mostly deals with nuclear weapons, and how men like Donald Trump or Kim Jong-un should never have their hands on nuclear weapons because of their fragile egos. Now, this is something … It’s been a long time since reporters, or journalists, or articles were talking about Donald Trump’s mental health, but it’s time to go back to that, because what we’ve seen in the last few months from the president shows that this man is growing increasingly unstable, and with the addition of John Bolton as his national security advisor, he’s now invited another unstable person to advise him, and things are getting so much worse.

Donald Trump’s ego is too fragile for him to serve as president of the United States, and if you don’t believe me, take a look at all of the conspiracy theories that this man has been pushing since day one of his presidency, that his inauguration crowd size was larger than Obama’s, even though you can put the pictures side by side and see that it’s a lie, that Obama had his wires tapped. That lie came out around the same time as we found out there was an investigation into his campaign. All of the lies have been lies of vanity, not to protect to the country, not to further any interests that the United States has, but to protect himself, his own ego. The fighting with North Korea on Twitter, the insults, the attacks, it’s because they’re doing the same to him, and he has to fire back.

The other people that he attacks on Twitter, the media, lawmakers, celebrities, people who’ve gone after him, his ego is so fragile that he can’t let anything go ever. He holds grudges for all of eternity. He will go to his grave one day still hating people like Rosie O’Donnell for the spat that they had back in 2006, or Adam Schiff, and Chuck Todd, and Maxine Waters. He is going to hate those people forever because his ego is so fragile that he can’t let it go, and the CNN article, though not mentioning those things, talks about the fact that this man has access to nuclear weapons. At any given point, without any oversight, without any approval from anyone else, this man can launch a nuclear weapon, and there is nothing we can do about it, nothing.

Think about that for a second. We have a man in the White House with probably the IQ and mindset of a young child, and certainly the behavior patterns of a young child, who has access to the most devastating weapons in the world, and not a single soul on this planet can stop him from launching those, so yeah, Trump’s fragile ego, his mental instability that we see every day on Twitter, his constant pushing of conspiracy theories that he believes are the truth, those prove beyond a doubt that Donald Trump is unfit to be president of the United States.