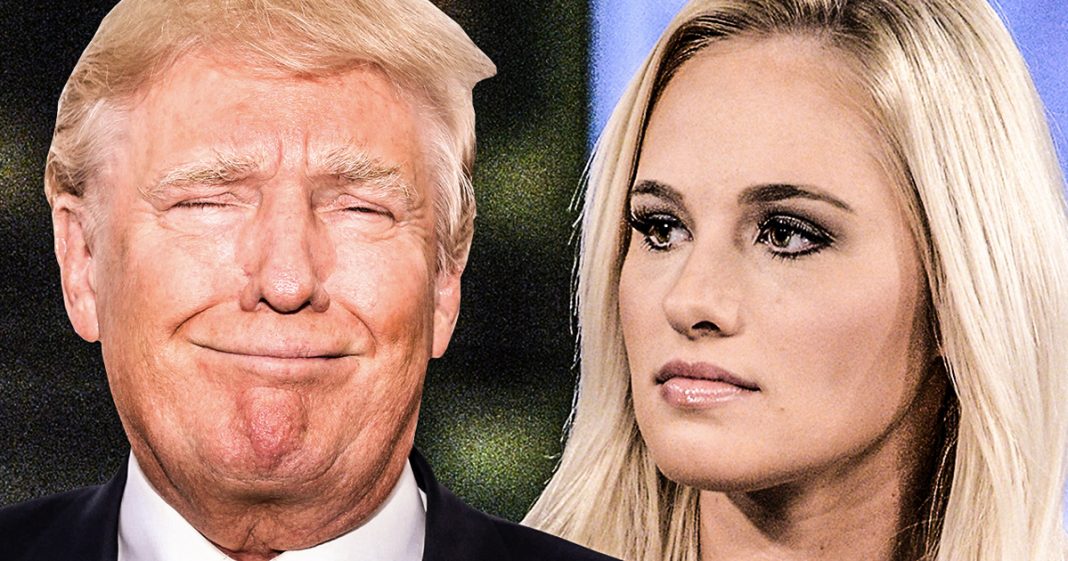 On Wednesday morning, Donald Trump sent out a tweet that was even creepier than usual. He said that “everybody is with Tom Lahren,” then proceeded to heap praise on the Fox News contributor. Not only is the tweet factually inaccurate, but it immediately raised suspicions about why Trump decided to randomly praise the woman. Ring of Fire’s Farron Cousins discusses this.

On Wednesday morning in between tweets about how Obama having a spy in his campaign and the Muller investigation, and other unhinged little pieces of tirade here and there, Donald Trump sent out a tweet that confused, and to be quite honest, creeped out a lot of people on Twitter. This was the tweet he sent out: “Everybody is with Tomi Lahren, a truly outstanding and respected young woman.” Just out of nowhere in the middle of his tirades about Muller and Obama, he decides to tweet out this short little love letter, I guess you could call it, to Fox News Contributor, Tomi Lahren.

So, let’s get one thing straight real quick here Mr. President. Nobody is with Tomi Lahren. Trust me, okay? The majority of people in this country understand exactly what she is. She is a vain, vacuous person who got a job on Fox News because they find her attractive and … oh, oh, I get it now. I see why you’re tweeting at her all these nice words. Are you already shopping around for wife number four? Is that what this is? Is Melania on the verge of leaving you and you’re trying to line up her replacement with this young blonde woman on Fox News?

Now, actually, a lot of people on Twitter had suggested that. Personally, I don’t think Tomi Lahren is Donald Trump’s type. I think she’s a little too, uh, strong, I guess. And I hate to use that word to describe somebody who’s such a horrible human being. But she is outspoken and Donald Trump doesn’t seem to like that. He likes the docile woman. The woman he can control and I don’t think Tomi Lahren, to her credit, is that kind of person. But the kind of person she is, is a huge racist who has no knowledge of facts and figures and statistics or policy, either domestic or foreign. She’s just a talking head on Fox News, who says whatever the people want her to say, that is, the higher ups at Fox News.

She goes out there, creates a little controversy, then disappears for a couple of days while she goes out and tries to create a new controversy and plays the victim on social media, even though she’s the one who starts all of these arguments.

But it is creepy. All right. Let’s just go back to that. This is super creepy that we have this 70-year-old man, 70 plus year old man, serving as President of the United States who took a break from his mental breakdown on Twitter to send out this little, “Everybody’s with you Tomi. Oh, god, you’re so great. I love you.” Yeah, it’s a little weird but it’s definitely 100% creepy.