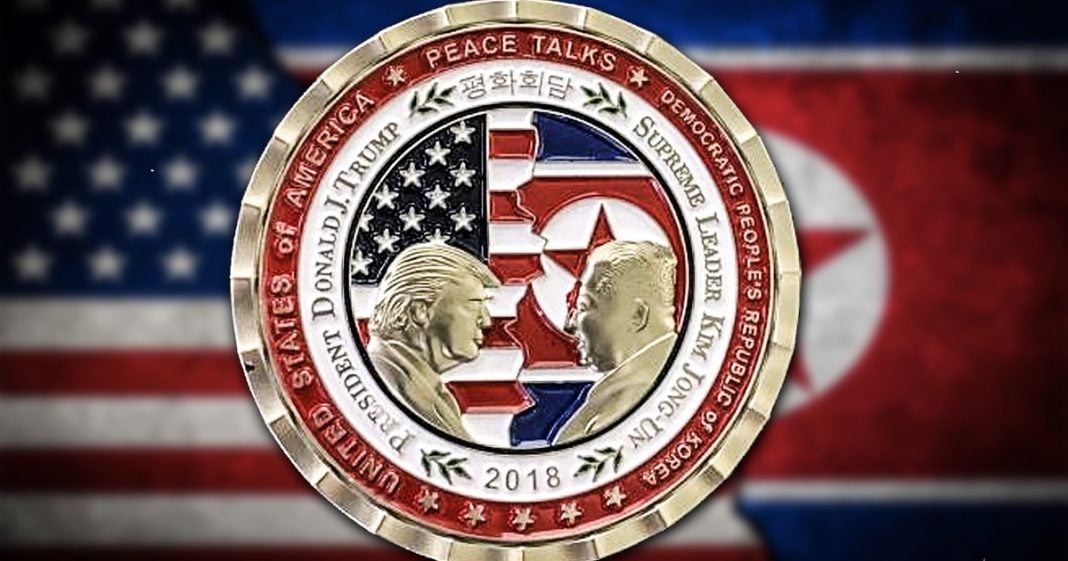 The Trump administration this week unveiled a new commemorative coin featuring the likenesses of both Trump and North Korea’s Kim Jong Un, with the phrase “Peace Talks” written all over it. But the summit hasn’t happened yet, and there’s a very good chance that it never will. Is this the best thing to be spending money on – inflating Trump’s ego? Ring of Fire’s Farron Cousins discusses this.

This week the White House unveiled their new commemorative coin featuring Donald Trump and Kim Jong-un. The coin is supposed to commemorate the upcoming June 12th summit between Trump and Kim. Here’s the thing. In case you haven’t seen the coin, it has peace talks all over it. Talk of peace. It has Donald Trump there looking super mad and tough. Kim Jong-un is just smiling. But, it refers to him as Supreme Leader, you know, the title that his family gave themselves when they became the brutal dictators of North Korea. They’re using the same horrid title, that this man gave himself, instead of saying, Leader Kim Jong-un. I mean, this guy is a dictator. He has murdered his own people. There’s nothing supreme about that, and yet, the Trump administration once again bows down to them and puts this offensive title on their stupid little commemorative coin.

Now, these coins are actually minted by the White House Military Office. Apparently, they do this quite frequently for most of Donald Trump’s overseas trips and visits. They’ll make little coins for it and then hand them out. This North Korea one, I think that made about 250 of them. Here’s the issue with that. We have people in the United States that are quite literally starving to death. Nine million children are about to lose their health insurance. Millions of people in this country have to make a choice every day which meal they’re going to skip because they can’t afford to eat three of them. People are dying in this country just from being poor. The government is cutting funds to help them, and at the same time, minting these absolutely ridiculous and unnecessary coins just to appease Donald Trump’s ego. That’s what this is. This is all about Donald Trump’s ego and his insecurities. Make me a coin that shows me looking great, maybe I’ll pocket a few, maybe I’ll sell them, right? Then, I can make even more profit off of this screwing over the federal government.

What’s even funnier is that they’ve already made these coins for a summit that Kim Jong-un has already threatened to cancel because of military exercises between the United States and South Korea. Now, Donald Trump, once again, bowed down to Kim, and said, okay, we’ll stop the military exercises, just don’t cancel the summit. But in all likelihood, this summit could still be canceled, and that’s about to make these 250 idiotic coins that Trump has minted look really, really stupid.