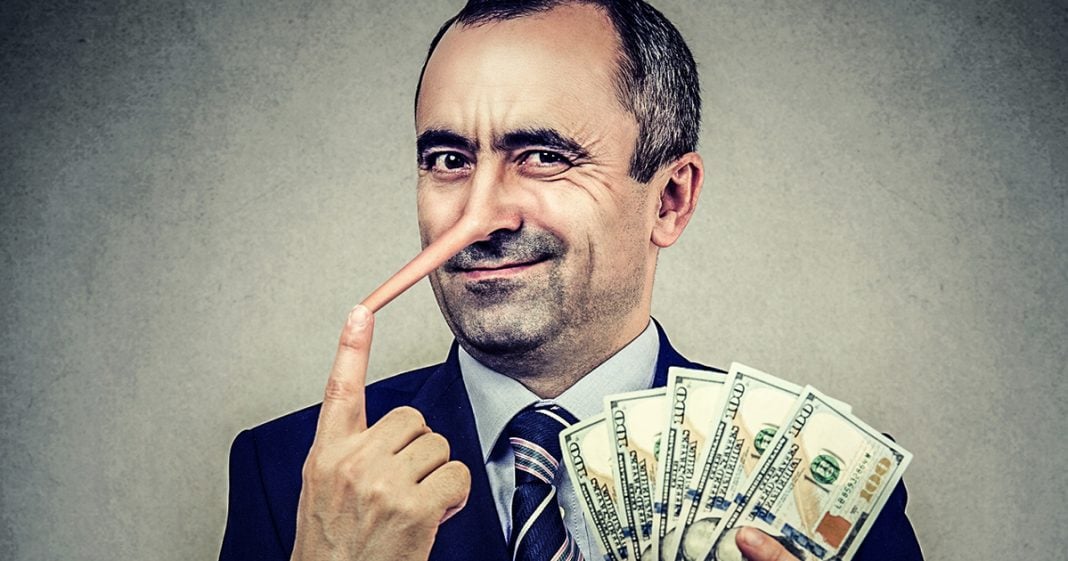 Major banking institutions in the United States just posted a collective $56 billion in profits for the FIRST QUARTER of this year. But apparently Congress didn’t think that was good enough, so they voted to give them an even bigger bailout by destroying many of the protections that had been put in place after these same banks crashed our economy in 2008. Many Democrats in the House and Senate sided with Republicans to give banks another undeserved break. Ring of Fire’s Farron Cousins discusses this.

The banking industry in the United States made a collective $56 billion in profits during just the first quarter of 2018. In three months the big banks in the United States altogether pulled in $56 billion in profits, but according to Republicans and plenty of Democrats that’s not enough. The big banks still need some favors. So this week the House of Representatives decided to finally vote on a bill that the Senate had voted on quite a while back, and they’ve decided to deregulate these banking giants who are pulling in money hand over fist and reaching record profits in record time for any given year.

Let’s start with that, the banks right now are hugely profitable. They’re not suffering, they’re not in need of any kind of congressional handout, and clearly the regulations that are currently in place are not hindering their ability to make money. But, Congress, the House and the Senate both decided, “You know what? Let’s go ahead and get rid of all of those helpful regulations that we put in place with Dodd-Frank after these same, exact banks tanked our economy in 2008.” Those protections that were put into place to protect consumers have now been taken away. The Senate passed it with the help of 17 Democrats, and the House passed it on Tuesday with the help of several dozen Democrats.

I know the Democratic reasoning here is that, “Well, it was gonna pass anyway, so my vote really didn’t matter.” No. You know what, it does, because that goes on your voting record. The next time you take some money from Wall Street, from any kind of big bank, we’re gonna understand why you voted that way. It wasn’t because it was gonna pass anyway, it’s because you’re a spineless corporatist that puts then wants of the bank over the needs of the people, and we are going to vote you out.

There is no reason whatsoever to repeal these regulations and one of the big ones that they’ve repealed, just so everybody can understand this, is the fact that Dodd-Frank put in place a series of regulations, that banks would have to go through stress testing to make sure they could survive a financial downfall if they had more than $50 billion in total assets. Well now that $50 billion number has been raised to $250 billion, so if you have a $200 billion bank out there, which a lot of them are, a lot of the big ones, the household name banks, yeah, you don’t have to worry about whether or not you can survive a crash because, hey, it’s not your money right? It’s the money of the investors. It’s the checking accounts, the savings accounts, the mortgages, the car loans, the home loans. Everything.

Those are the people who are gonna get screwed, not the banks, because Congress, as they showed us this week with this vote, they’re always gonna be there to bail them out no matter what. Then they’ll punish them with maybe some little bitty regulations here and there, and then in a few years when they think nobody is paying attention they’re gonna strip them away and say, “Hey! How about it, it’s field day again for you guys.”

This is what always happens. It’s what always happens. Crash, regulations, repeal, crash, repeat. Go back through the last 40 years of American financial history and you’ll see it there clear as day. Hell, Goldman Sachs earlier this week actually admitted that we’re likely heading towards a recession because of the Republican policies that have been enacted. But yeah, nonetheless, they’re still fighting for this deregulation, they’re still gonna write big cheques to the people who are enacting the policies, who Goldman Sachs says are going to cause a recession. Why? Because Goldman’s not gonna lose money, and even if they do Congress will give it back to them in the form of a bailout. Or, worse case scenario, they lose money for two or three years, but then they go right back up to record profits.

Banks seem to have a short term memory and right now the only thing on their minds is the fact that they made $56 billion in the first three years of this month. Senate and House Republicans, along with plenty of Senate and House Democrats, decided that they needed even more money and less government regulation so that they could continue to gamble away the futures of American citizens.