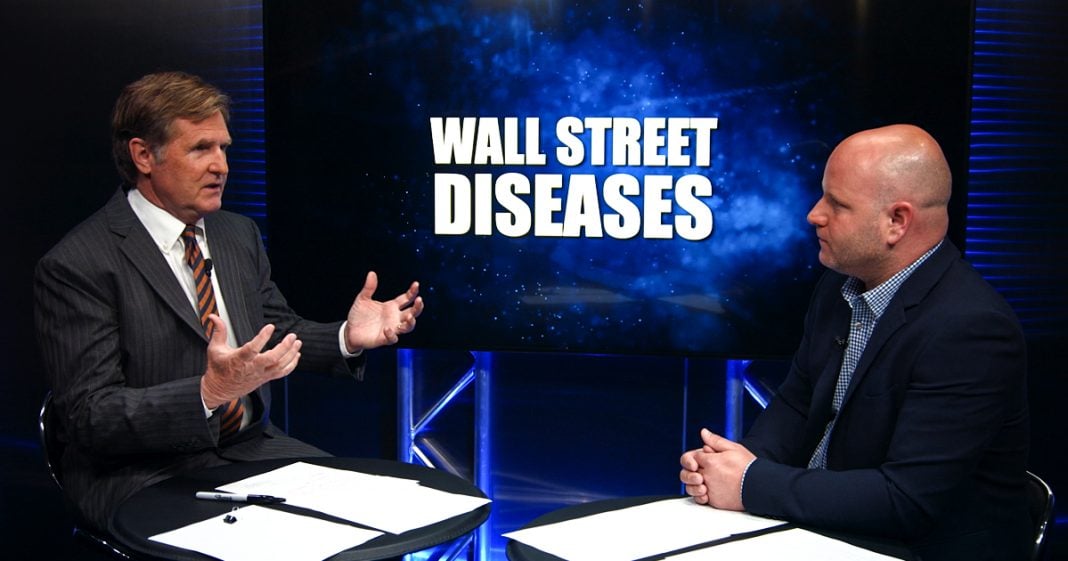 Recently, an analyst for Goldman Sachs admitted that curing diseases is actually bad for business – and that tells you everything you need to know about how screwed up our healthcare system is. Ring of Fire’s Mike Papantonio and Farron Cousins discuss this.

Mike Papantonio: Welcome back to Ring of Fire. I’m Mike Papantonio here with Farron Cousins, editor of the National Trial Lawyer Magazine, one of the biggest trial law magazines in the country.

Recently an analyst for Goldman Saks admitted that curing diseases is actually bad for business. He actually said that. Tells you all you need to know about how screwed up our healthcare system is. More importantly, it tells you how the thugs on Wall Street regard us generally when it comes to making big profits.

I read this. I had to read it twice because it was so callous, Farron. This character is … What he’s talking about is if we cure cancer, we’re not going to have all that money coming in for things like chemotherapy and all this money that goes into treating cancer victims. He actually was very down on the idea of gene therapy to cure diseases because not because I wasn’t going to be profitable from that standpoint, but it was going to destroy all the profits and long term care for people who are dying from things like cancer.

What’s your take on this?

Farron Cousins: He says the idea of one shot cures, yeah, it’s attractive, but for the love of God, we got to take care of these poor bankers by getting people to come back every month. Whether it’s dialysis or chemotherapy or whatever it is that everybody has to keep coming back for. It’s funny. Lee Camp did a phenomenal job on this story.

Mike Papantonio: Yeah, Lee did a great job on this story.

Farron Cousins: Published in Truth Dig, and he also mentions there’s this old comedy routine from Chris Rock from 1999 where he said they’re never going to cure diseases because there’s no money in that. At the time it was a humorous observation. It was funny because you didn’t think it would happen. But here, this guy from Goldman Saks, Salveen Richter is his name.

Farron Cousins: Absolutely said this is bad for business.

Mike Papantonio: So the whole time that we thought it was a joke, the thugs up on Wall Street, they weren’t laughing.

Mike Papantonio: They were worried about, “Gee. We really might cure something like cancer. We might cure MS and we might cure these long term diseases.” The problem is this, part of this issue is what’s happened is the hospital corporations have become so big. You’ve got hospital corporations that run public health all over the country. Add to that the monstrosity that we call the pharmaceutical industry. Those two entities, they benefit big from long term care. If you cure cancer, you don’t have the pharmaceutical industry making a gazillion dollars selling cancer drugs, same with hospitals. So these hospital corporations have become this big monster that we have to keep feeding, and that’s what this guys talking about. He’s talking about, “We’re making a lot of money in the healthcare industry because you’ve got all the baby boomers coming through. A lot of the money we’re making is that long term care kind of issue.”

Farron Cousins: Well, a lot of questions that came up from this is just the fact of why does Wall Street even care what happens in the pharmaceutical industry? Why do these bankers care what happens in the hospital industry? It’s because people don’t understand how entwined everything has become in this society in terms of businesses. Wall Street banks fund these hospitals. They fund the pharmaceutical industry. So big pharma has to make a profit because part of its got to go back to the big bankers. They do the same thing with the gun industry. These big banks are entwined with them. They’re entwined with Monsanto and DuPont and Dow and everybody. So whatever happens, and that’s one of the reasons these banking lobbyists push for lax regulations on the oil industry, something seemingly unrelated. Well, it’s because they help fund it. They finance it.

Mike Papantonio: Well, in this story though what they’re actually saying, they’re actually responding this freak with Goldman Saks that by the way, one of the freaks that probably should have been held responsible for the 2008 burn down where Goldman Saks start selling junk. They start selling junk stocks to their best customers while they are getting rid of their stock at the same time. They know what’s going on. The inside information is everybody there with Goldman Saks understands the burn downs getting ready to take place, but they’re telling their customers buy more, buy more because they’re still making a lot of money on this. None of them go to prison. Not one of these freaks went to prison. So now the freaks are out there saying, “Gee whiz. We hope that there’s no long term, serious disease solution here because we’re not going to sell enough drugs. We’re not going to have enough hospital stays and the healthcare industry is going to suffer. We, Goldman Saks, are going to suffer because we’re so invested in that.” What kind of freaking ghoul even says that? What kind of even ghoul thinks that much less says it? Well, Goldman Saks.

Let me just tell you something, Goldman Saks … I just got back from Europe and I was spending a good fair amount of time in Holland talking to the folks about their banking system. There their big target is the Roth child, the Roth child virtually own a piece of everything having to do with banking. Goldman Saks has become that Roth child in the United States where they own it all. I mean, you might think it’s a mom and pop bank you’re doing business with, but the money flows back to Goldman Saks. It’s something that we’ve just got to get control over.

Farron Cousins: When you look at this from the healthcare perspective too, and you wonder it seems like we’ve kind of hit a stale period in time here in terms of medical advancements here in the United States. We haven’t cured anything recently. We haven’t seen any major breakthroughs. I mean, hell, Cuba has come very close to having a lung cancer cure.

Farron Cousins: They’ve come close to being able to regenerate human teeth using stem cells, and here in the United States it’s all about profit, not about the cure.

Mike Papantonio: But, I mean, he actually made this statement. It was adhering with a credible scientist, and the scientist is looking at him like, “What?” This is a real scientist across from the table, and this idiot from Alabama, Mo Brooks, says, “Well, it’s not really just climate change. It’s rocks falling into the ocean.” I wish somebody in that hearing said, “Mr. Brooks, most of those rocks probably have fallen out of your damn head.”

What is your take on this story?

Farron Cousins: This is the kind of idiocy that we’re up against though. When we try to make any kind of progress on the issue of climate change, we’re going to have either an Inhofe holding a snowball saying, “Well, this can’t exist if climate change is real.” Or even worse, because this is the dumbest thing I’ve ever heard to argue that climate change isn’t real. That it’s rocks. The white cliffs of Dover are falling into the ocean, and dirt … He went on to say there’s just dirt from rivers that goes into the ocean and it’s just making the sea level rise by three or four inches across the globe.

Mike Papantonio: This is a guy whose probably never traveled anywhere. I mean, if he’s been out of Birmingham, Alabama, I’d be surprised.