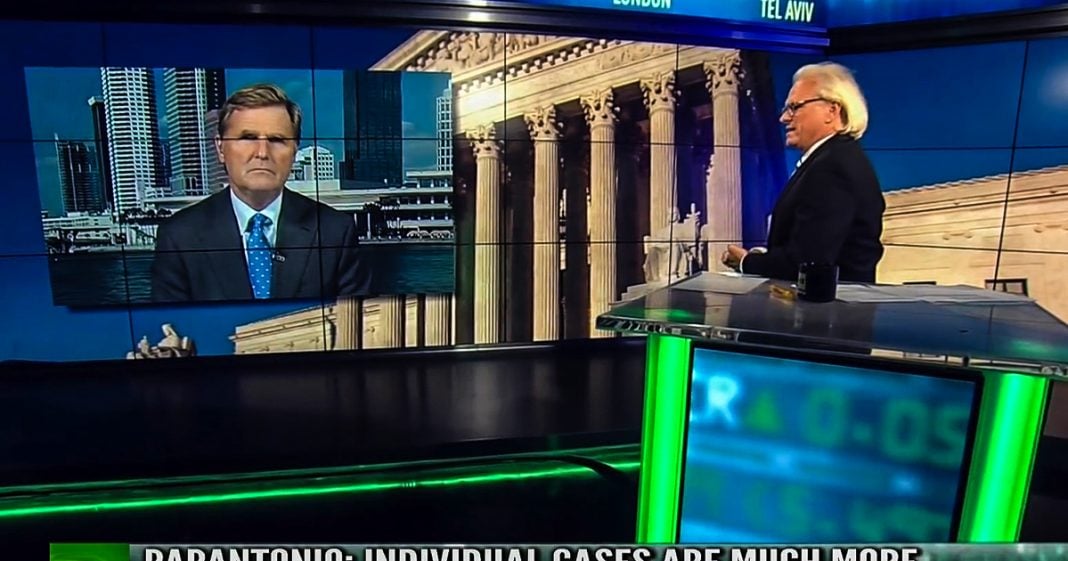 Via Boom Bust RT America: The Supreme Court has made it harder for worker to file class-action lawsuits against their employer; America’s Lawyer, Mike Papantonio gives us his take.

Bart Chilton: On Monday as we reported, the Supreme Court made a decision that will impact employee rights to class action lawsuits. Does this mean that employees can no longer ever band together in court? There’s no better person to ask than America’s lawyer, mighty Mike Papantonio. Counselor, thank you so much for joining us, we really appreciate it. What does this mean for companies, but as important, or more important in fact, what does it mean for employees, Mike?

Mike Papantonio: Well, first, arbitration, which millions of Americans have already agreed to by signing arbitration clauses in contracts takes away the right of these employees to sue corporations when they lie, cheat, and steal. There are arbitration clauses in your credit card contracts, you name it, but here this is very specific, because you have these companies that are stealing money from these employees. The level of theft is amazing.

The way they steal money is they don’t pay for things like taking … on their break, they’re ordered to go back to work without being paid. There are all kinds of scams that they use. As a matter of fact, we handled one of the biggest cases in the country against Walmart, where they had a whole series of scams where they were just taking $10 here, $20 there.

Here, this Supreme Court clearly understands that most of the theft that takes place with employees is in little cuts. They find that employee is unwilling to bring a case unless they can join into a class. They’re unwilling to bring case by case, A, because they can’t afford it, B, most lawyers won’t take a case like that, and C, they get targeted by bringing a case like that.

This is actually something that businesses build into their business plan. We saw that with Walmart. Walmart calculated that they could get away with stealing $10 million each quarter by taking a little bit here and a little bit there, and in the end, they could keep the $10 million, because if people could not bring a class action, like we were able to do in that case, if they can’t bring a class action, then there’s no way for an employee to actually recover. This is of the same Supreme Court, the same business-oriented, corporate Supreme Court who every time they get an issue like this will always, always rule against consumers.

Bart Chilton: Mike, it seems to me that workers really don’t have a choice, too. You want a job, you sign the employment papers, et cetera, and so the only folks that will be able to take a big company to court will be the wealthy folks, and those aren’t the people working at Walmart. My guess is, and we’ll have to see what happens … I don’t want to get too much into the politics here, but among the reaction that I’ve heard, there are some critics calling for a legislation to effectively overturn or blunt the ruling, and that seems like a dead letter under the current Congress and the White House. As a purely legal matter, can legislation restore these rights?

Mike Papantonio: Yes, yes it can, and it won’t. I can put it like that. It can absolutely do this, but it won’t. They’ve been asked to do this on several occasions in other issues where consumers were hammered, workers in particular, were hammered by corporate conduct like this, and they’ve passed on it virtually every time. So yeah, it can happen, legislation can solve the problem, but it’s got to be solved through the courts. Right now, you have a Supreme Court that is so oriented towards businesses’ interest, that there’s no way to turn them around.

Bart Chilton: One more question on the legal nuts and bolts, Mike. Justice Ginsburg chose to read her dissent, which was a pretty … impassioned from the bench, and called it, “Egregiously wrong.” Who’s right? Ginsburg citing the National Labor Relations Act, or Chief Justice Gorsuch citing a Federal Arbitration Act of 1925? Settle this for us.

Mike Papantonio: … in an arbitration setting.

Bart Chilton: We’ve still got about 60 seconds, Mike. In the technology space, it seems that companies have been requiring binding arbitration like we’ve talked about with Walmart and others, but Microsoft notably said they are going to stop enforcing arbitration agreements in sexual harassment cases, and Uber last week just did the same thing.

You may think it a silly question of me, Mike, but I mean, do you think some companies will look at this as a good that they will do to entice employees, or will they take a heck of a lot of comfort in the Supreme Court decision and say, “Hey, we’re not going to do anything?”

Mike Papantonio: This is like … they should have a parade. Corporate Americans should have a parade right through the middle of DC, because none of them are going to do anything to interfere with this on behalf of workers. Promise you. If it does, please have me back on the show and I can say, “I was wrong.”

Bart Chilton: That parade goes on here every day, we just don’t happen to se it because they’re in black cars with shaded windows. America’s lawyer, mighty Mike Papantonio. Thank you so much for being with us Mike, appreciate it.