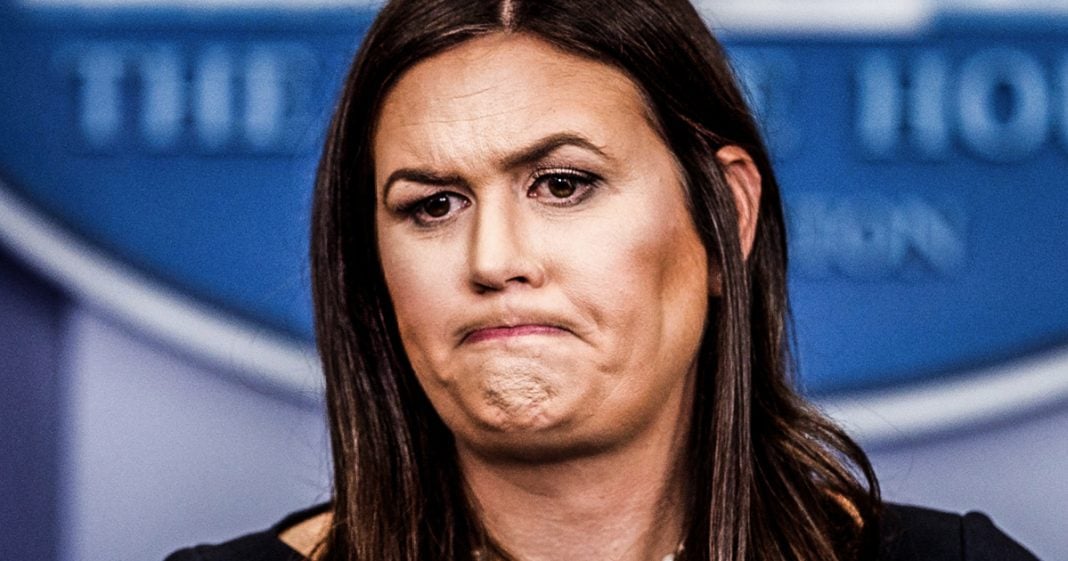 Sarah Huckabee Sanders claims that she has feelings, and that when the American public calls her a liar, those feelings get hurt. If being called a liar bothers her so much, maybe she should start telling the truth every now and then? That seems like it would clear up a lot of her problems, as Ring of Fire’s Farron Cousins explains.

According to a recent interview that she gave to the New York Times, White House Press Secretary, Sarah Huckabee Sanders, says that it really bothers her when people call her a liar. She doesn’t like it. She thinks it’s unfair, and she thinks that people need to stop calling her a liar. In the interview that she gave with the paper, she talked about the fact that, you know, it’s one thing to go out there and misspeak or maybe not have all the facts, than it is to maliciously lie, and Huckabee Sanders claims that what she does is she goes out there and misspeaks, or she goes out there with none of the information or only half the information, or maybe later the information changes, and so that’s why people think that she’s lying all the time.

Well, here’s the sad truth, Sarah. That’s not the case. Sure, I’m willing to bet there’s sometimes you don’t have all the facts, but instead of saying that, you go out there, and you make things up. You do maliciously lie. You do it almost every single day, so don’t get upset that people are calling you a liar, because there’s a simple solution to that. Stop lying to them. If you misspeak, you need to say, “Oops, I didn’t mean that. Let me correct it before moving on.” Or, if you don’t have all the information, you need to say, “Listen, I can’t answer that accurately right now because information is still coming in, and I do not have the latest updates on it. Please get back to me once we have all the information, and I will be happy to answer your question.” That’s how you handle it in a calm, professional way.

But you don’t want to do that. You get so flustered, and more importantly, so angry anytime a reporter asks you a question, that you just make things up because you don’t care. You make things up because you want to protect your boss, and furthermore, if you don’t like being called a liar, how do you think these media outlets out here feel when they’re actually telling the truth, and yet you go up there every day and call them fake news, and say that they are lying about everything. They’re the ones actually telling the truth. You’re the one making things up every day on behalf of the President of the United States.

So if it bothers you, that’s your option. Start telling the truth, or option B, find a new job. Find a new job that maybe you can handle a little better because obviously, if you don’t like being called a liar, but you’re not gonna stop lying, then this isn’t the position for you. I’m sure maybe a position on Fox News, where they love it when you lie to them, would be more suitable for your talents right now, but if you don’t want people calling you a liar, the only thing you can do is to stop lying to them, and if you don’t know the answer, don’t be afraid to let them know that. There is not reason, whatsoever, why you have to just make things up off the top of your head just because you think that’s what Donald Trump wants you to do.