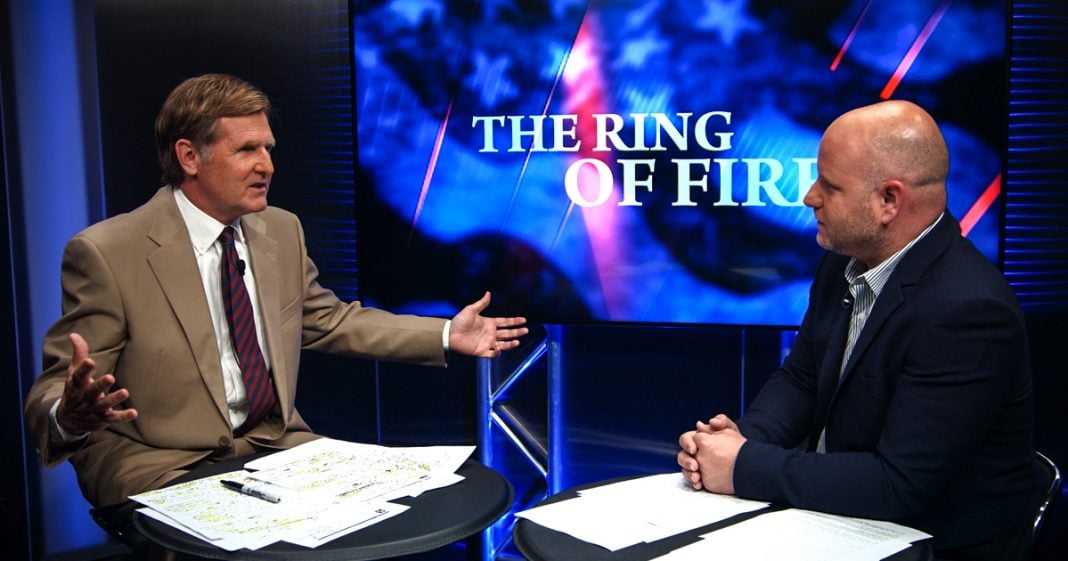 The DNC is suing Russia, Wikileaks, and Donald Trump for alleged campaign and election interference, and this lawsuit might be one of the biggest mistakes the Party has made in recent years. Ring of Fire’s Mike Papantonio and Farron Cousins discuss this.

Mike Papantonio: The DNC is suing Russia, WikiLeaks, and Donald Trump for alleged campaign election interference, and this lawsuit might be one of the biggest mistakes the party’s made in recent years, and Lord knows they’ve made mistakes. I’m here with Farron Cousins, editor of the national Trial Lawyer Magazine, one of the biggest trial lawyer magazines in the country. What is your take on this?

I looked at it and I said first of all, there’s a similar case against Roger Stone that is going to be dismissed because the pleading sucks, the only way I can describe it. The pleadings suck. And the argument in front of the judge was so absurd that the judge had the lawyers there for four hours, saying, “Let me get this right. You’re suing Roger Stone because he was somehow related to the DNC, and the DNC … He did some harm to the DNC, and the DNC was affected by Russia, and you’re here in court for what?” It was that ridiculous. The argument, if you just look, the story itself tells you how ridiculous the argument is, but it’s like the DNC has gone out and hired these buffoons to bring these kinds of cases. What is your take? Am I just overreacting to this?

Farron Cousins: No. No, no, no, and see, what’s interesting here is that the DNC might, very small might, have had a case had they just said, “We’re going to sue WikiLeaks because they hacked us. We know they hacked us. They’ve admitted it.”

Farron Cousins: So, okay, you probably could have had a case there, but then they said, “But in addition, we’re just suing Russia,” whatever the hell that means. Donald Trump, you’re in this too, the Trump campaign, they wanted to lump everybody in and suddenly this becomes something that you can’t possibly win.

And the timing of this, right as they’re saying there’s a blue wave coming, well, there likely is, but if this case gets either thrown out, or you get ruled against and the judge says, “Nope, you’re wrong. I side with the defendants here,” before those mid-terms, or hell, even after it heading into the 2020 elections, they are doomed. This will be the biggest Republican talking point, because they’re going say, “Look. The Democrats went to court and tried to prove that they didn’t run a bad campaign, it was everybody else, and even the legal system says, ‘Nope, you just ran a bad campaign.'”

Mike Papantonio: So, I disagree with this idea of a blue wave coming. I don’t see it. Maybe it will. Who knows? But, it’s not looking like that, let me just tell you that. So, when I look at this case, what I see is this. They’re saying the DNC has been harmed by the conduct of WikiLeaks and Russia for releasing emails. Now, what were the emails? You see, that’s what people don’t understand. The emails were about how the DNC was carrying on this corrupt activity, trying to minimize and make Bernie Sanders disappear. Debbie Wasserman Schultz was doing it. John Podesta was doing it. His brother, Tony Podesta, was doing it. Hillary Clinton was doing it. And it’s all in those emails.

Farron Cousins: No, no, no. That’s absolutely true. You know, they’ve done plenty of analyses on Hillary Clinton, her ads and her speeches during the 2016 election. Only 25% of the time did she ever talk about an issue, and the Democratic Party could have looked at those studies. They could have said, “Okay, well, apparently we need to talk about issues.” But, no. Instead, they wanted to deflect and say, “No, Hillary was supposed to be anointed. She was supposed to be president-”

Mike Papantonio: Because Bill was her husband-

Mike Papantonio: … and she’s been hanging around a long time.

Farron Cousins: Right. So now, we have to drag this out through a court battle that is going to end badly for the DNC.

Farron Cousins: Hell, I mean, look. Listen, when you think about the fact that, okay, if you want to move forward with this suit, if I’m any of the defendants, I’m saying, “Yes. No, go forward. Don’t throw it out. Let’s see your documents.”

Farron Cousins: And then expose everything else. It’s awful.

Mike Papantonio: Let’s not miss that point. That is a critical point. I don’t know that the defendants want it thrown out, because they get to take discovery too. They get to sit Hillary Clinton down. They get to sit Debbie Wasserman Schultz down, and Pelosi, and Podesta, and they get to ask them some really tough questions. So, I don’t know. If I’m the lawyer here, I’m saying, “Don’t be so quick to get this thing dismissed. Let’s have some fun. Let’s take some depositions.”

Now, I have an advantage maybe you don’t have. I’m not Democrat, and I’m not Republican. I’ve been Independent for 35 years. As I watch this develop, it gets crazier by the moment, and I’m able to call balls and strikes. This is a bad move for the Democrats, and chances are it was a knee-jerk reaction, thinking we’re going to raise a lot of money by doing this, and the money’s going to pour in. Money hasn’t poured in, has it?

Farron Cousins: Well, no. And actually, on the money issue, that also raises another point on what could be found out during discovery, because you do have average, regular working Joe Democrats out there who send money to the DNC.

Farron Cousins: So if we find out in the discovery that they used that money for whatever DNC uses money for, but at the same time engaging in these activities to de-legitimize one candidate, Bernie Sanders-

Farron Cousins: … to prop up another, you could be looking at some really interesting other lawsuits that could come from people who say, “I gave you $100. I was a Sanders supporter. You undermined the actual process, so let’s just file a suit and see what happens there.” I mean, there is no good outcome on this.

Mike Papantonio: See, that’s what everybody misses in these stories. What were the emails? Why were they so upset? They were upset because the DNC was caught lying, cheating, and stealing. That’s the best way I can describe it. And they were caught hustling donors by taking that money and saying, “Well, I don’t really care whether you’re for Bernie or not. We’re all in on Hillary, and that’s the only decision that you have.” That’s what the emails show. That’s what they’re complaining about. Everybody misses that. Yeah, I think hacking did take place. I think, whether it was Guccifer, I don’t know who the heck did it, but there was some hacking that took place. But what was hacked, if you look at the contents of the email, you go, “Oh my god.”

Farron Cousins: Well, Hillary’s poll numbers didn’t even move after the hack was revealed. She didn’t lose support from this. It didn’t happen. Bad argument.

Mike Papantonio: Yeah, well it is a bad argument. But, you know what? If I’m advising them, don’t get it dismissed so quick.