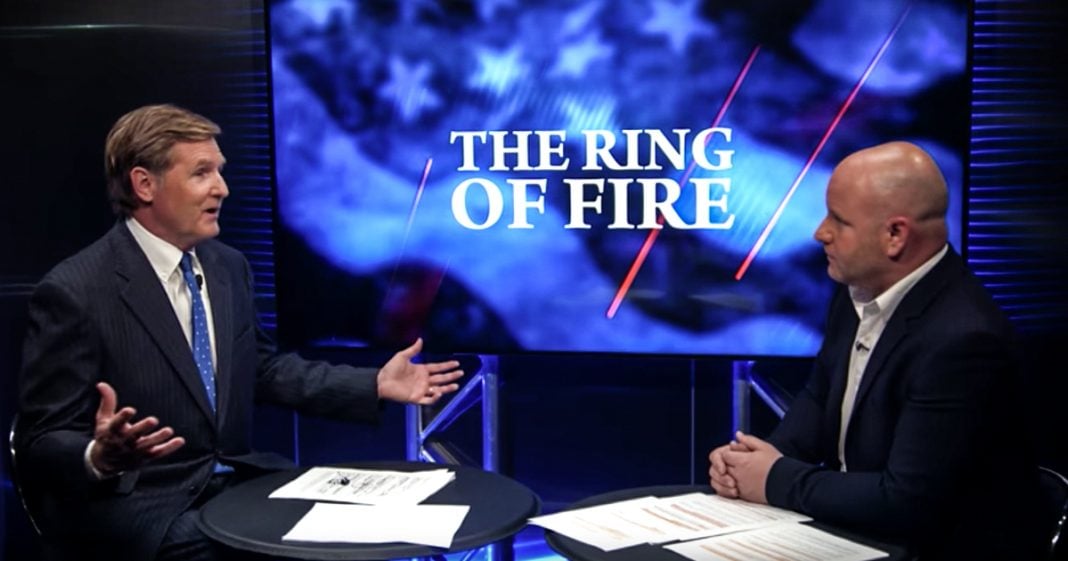 A judge in Arkansas has granted farmers in the state permission to use a toxic herbicide called Dicamba this summer, in spite of all of the health warnings about this product. Ring of Fire’s Mike Papantonio and Farron Cousins discuss this.

Mike Papantonio: A judge in Arkansas has granted farmers in the state permission to use a toxic herbicide called Dicamba this summer, in spite of all of the health warnings about this product. You know, this again, it’s another Monsanto story.

Farron Cousins: It’s like I can’t get away from Monsanto.

Mike Papantonio: And now that they’re joined with Bayer, can you imagine? What have we created here? First of all, we know their history with Roundup is awful. Now, Dicamba is supposed to come in and be better? It’s worse. Tell us the story.

Farron Cousins: It isn’t. Dicamba’s been around since I think 1967. It’s what they had before Roundup, so Roundup came out and was more effective, so they went with that and Dicamba kind of took to the back shelf. But now that all this negative publicity and the horrible studies are coming out about what Roundup does to you, they’re going back to Dicamba. Trying to tell farmers, “No, no, no. This isn’t anywhere near as bad as Roundup. It’s not going to cause those diseases.” It just causes a whole nother set of horrible side effects.

Mike Papantonio: Yeah, interesting. While they’re trying to sell Dicamba … First of all, let me go back. It was taken off the market initially because of the problem with disease. They were worried about the science wasn’t good on it. Their own clinicals showed it was not good. So then they come up with Roundup. Roundup is non-selective. It just kills everything in its way unless you have a special seed that’s a GMO, it won’t kill … You know they’re gonna have … I think you and I talked about, we’re going to have Roundup-ready people before it’s all over.

But Dicamba is just as bad. So what happened in this case? The judge has said, “Yeah, you can go ahead and spray it.” The judge understands the science, the judge has been told that this is not just new science, that this stuff has the potential to kill other plants, not just people. But from an economic standpoint, it destroys the farms that are next to Dicamba farms.

Farron Cousins: Well, exactly. The judge had specifically addressed that issue, because he only granted permission to six different farms in the state of Arkansas. Then you had all of the other farmers nearby who had kind of petitioned and said, “Listen, if he sprays Dicamba on his farm, even though he’s 20 miles down the road, we know, the science shows us the drift on that is going to kill my farm.”

That is one of the main concerns, aside from the health concerns about Dicamba, is that it is easily, a little bit more so than Roundup … It can get into the atmosphere a little easier. It travels a little better in the water, in the soil and in the air. So when you spray it somewhere, you have to keep in mind that this thing is actually going to travel another 10 to 20 miles out.

Mike Papantonio: Okay, from a farmer’s standpoint, that’s important because it’s non-selective. It’s not going to pick out a particular kind of weed to destroy. It’s going to go after everything, it’s going to kill everything. The farmers that are next to these places where there’s overspray, it’s destroying their farms. This judge said, “Ah, it’s not a problem. It’s okay.”

This story really starts getting worse when we start seeing how its physical harm that Dicamba causes is the same physical harm that Roundup causes. The other part of it is when we see the biopersistence of it. How long does it stay in the blood? We’re finding Roundup in people’s urine that have never worked around it. We’re finding it in food. 1,200 parts per billion in Cheerios, Roundup. You see? So I don’t know how many free passes we’re going to give Monsanto. They’re just so politically connected.

Farron Cousins: Well and here’s another thing. This is one of the major health concerns, because Dicamba … Well, let’s take this back. Roundup, it takes a little while for things to cause problems. Dicamba can instantaneously cause illnesses and problems in people because its main ingredient is benzoic acid. An acid. So you breathe it in …

Farron Cousins: Right, well you breathe it in. It can cause immediate chemical burns in the throat and lungs. If you get it on your skin, it can cause chemical burns on the skin. So those are instant damages that come from Dicamba. The judge knew this, but he said, “You know what? Go ahead and do it anyway, because why not?”

Mike Papantonio: Good ol’ boy judge. Yeah, elected, probably an elected judge. Good ol’ boy, farmers got him elected. So go ahead and kill the crops of the other farmers who didn’t elect me, I guess is the story here.