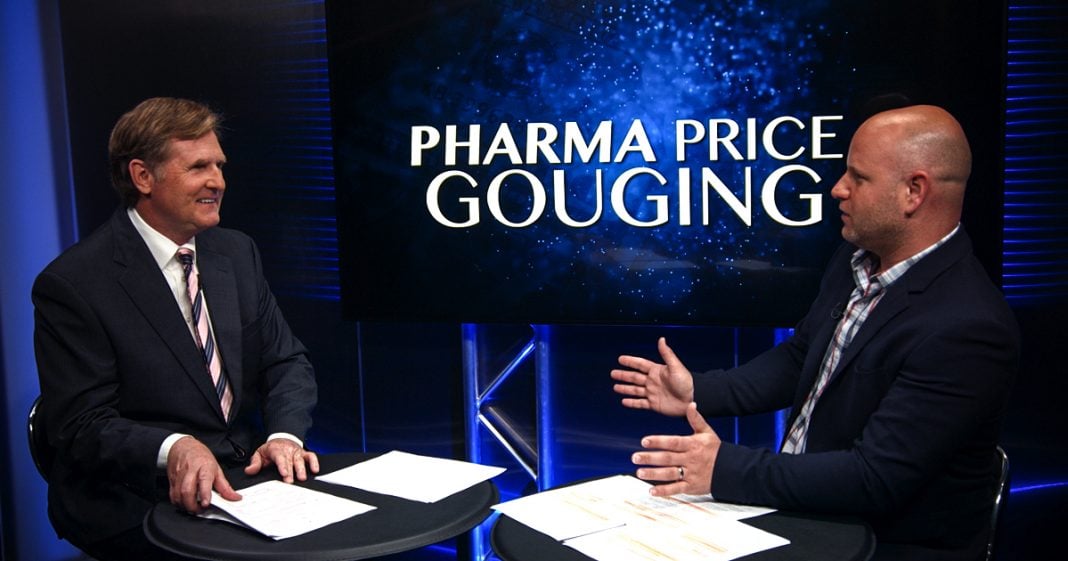 A federal appeals court has ruled that generic drug makers can ABSOLUTELY jack up the prices of their drugs, even if it is clear that they are price gouging consumers. Ring of Fire’s Mike Papantonio and Farron Cousins discuss this.

Mike Papantonio: A federal appeals court has ruled that generic drug makers can absolutely jack up the prices of their drugs, even if it’s clear that it is clearly, clearly price gouging consumers. According to this appellate court, that’s just fine. This is most BS federal judiciary ruling. It’s just it’s beyond understanding. They try to justify everything in this order on the Commerce Clause. They say here you got in Maryland, just doing exactly what Maryland should be doing, a state should have the right to say, “You know what? The feds, you blew it. We’re not going to blow it here in our state, though. If the company price gouges, we’re going to go after them.” Now, why can’t they do that with gasoline? A state can make a decision, “Hey, we know what price gouging is on gasoline, that hasn’t been overruled by an appellate court. But we can’t do with pharmaceutical industry.” Because, you know the answer. What’s the answer?

Farron Cousins: The answer is money. The big, big money. People don’t even understand how powerful this pharmaceutical lobby is in DC. They’re one of the biggest spenders in Washington, both in lobbying and in campaign donations. And so, in Maryland. Obviously-

Farron Cousins: Right. And all they wanted to be able to do was sue generic drug manufacturers when they price gouge. This wasn’t a law to rein in price gouging. It was just if you price gouge, I can take you to court, the AG can take you to court. And this judge, and we had just talked about how important judges are, nobody wants to care about it. This is what happens. He said, “No, no, no, you can’t do it because the other states may set the prices and then it’s crossing lines.”

So, here you’ve got these types, these same types, making these decisions. Look, I got to tell you something. The Commerce Clause use of this is absurd. The argument that the Commerce Clause interferes with the ability of a state to make a decision like this, it’s balanced against, we’ve said it before, health, safety and welfare. Typically, they’re called police powers. And a state has the right to say, “In our state, I don’t know about your state, but in our state the problems are so bad, they’re so unique to Maryland. They’re so unique in what we’re seeing every day that we believe our police powers in order to protect the health safety and welfare of our citizens, we want to pass this.” And this federal, this is way overreaching. Way overreaching by the Federal Court here.

Farron Cousins: Yeah. So, this judge gets to go home, the defense lawyer gets to go home and say, “Hey, guess what, honey? Today I made it harder for a poor family to afford an EpiPen for their child who could die if they don’t have it. But you know these corporations give a lot of money to the people who appointed me, they’re a lot of money to the people who paid me.” That’s what this is. This all comes back to the money. If you looked at just the law on this, there’s no question that they should be able to sue when a company price gouges consumers, but it goes back to all of that money and politics today.

Mike Papantonio: US Circuit Judge James Wynn, he dissented, thank goodness. He dissented in saying, “What are you talking about?” He made the same analysis that I just made. A state has police powers to say what’s unique about our state, whatever reason they’re coming to our state and they’re gouging our consumers. I don’t know what they’re doing your state, but they’re doing that to us. The state has right to take action.

Mike Papantonio: Stephanie Thacker, who I know, by the way, who used to be a corporate defense lawyer. I’ve actually tried cases against Stephanie Thacker, face to face. It’s no surprise here. This is exactly what you would expect. I didn’t even catch that until you just said it. Stephanie Thacker, I know this woman. She comes from a corporate defense background, and this is no surprise here. But don’t you love the Association for Accessible Medicines was the name of the lobbyist group. The Association for Accessible Medicines. I mean, is that dark humor or what?

EPA tried to bury a study that showed that millions of Americans are drinking poisoned tap water because they feared that the study would “bring bad PR” for the White House. That was the reason they deep-sixed to study. Bad PR for the White House and make it difficult for the military to have to respond. Take it away.

Farron Cousins: What’s so fun about this is that this story came to light because we actually still have a few journalists in this country doing their job. This was the result of a FOIA request that we even know what happened. The EPA conducted a study and it found that water near industrial plants, water near military basis where they handle any kind of hazardous materials, the water is literally poisoned, is the word they used. It is poison. But, they didn’t want this study to come out because they said, and here’s the quote “The public media and congressional reaction to these numbers is going to be huge. The impact to EPA and Department of Defense is going to be extremely painful. We cannot seem to get ATSDR to realize the potential public relations nightmare this is going to be.”

Mike Papantonio: Not public health nightmare. The public relations nightmare. Now, as you know, I tried the case in C8. This was the Ohio case that I tried at the Ohio River Valley. C8 was one of the issues here. C8 is a product that the military uses. They use it as a foam for firefighting and various things as that. Well, they’re dumping it in people’s waterways. They did that up in the Ohio River Valley, and what did we find? The jury’s came back every time in those cases and said it causes cancer, cause kidney cancer, cause testicular cancers. But in addition to that, the jury’s didn’t even get into the point that causes birth defects, gastrointestinal problems, neurological problems. That’s what happens when people drink this stuff called C0. So, Pruitt, who is a real thug, a dunce thug at that, he says, “Well, we’re going to delay releasing this study because it’s so bad it’s going to scare the bejesus out of everybody, and we can’t have that.”

Farron Cousins: Well, we’ve already got a point here where we have more than 2,000 different water systems in the United States that had higher levels of Lead, than what was found in Flint, Michigan. So, yeah, you know what? The public is going to freak out when you tell them, hey, look, you and I right now are basically surrounded by three different military bases, one of which is where they developed Agent Orange.” So, I have no doubt the water in our city has been consistently voted one of the worst in the country.

Mike Papantonio: And we have more cancer clusters here than most places in America by the way.

Farron Cousins: Exactly. But yeah, people need to know that, they need to freak out, because they know how deadly it is and they’re just saying, “Well, we don’t want the bad PR.”

Mike Papantonio: Pruitt is here. I’m sorry, but he’s here for a while. It’s going to get worse as we go.