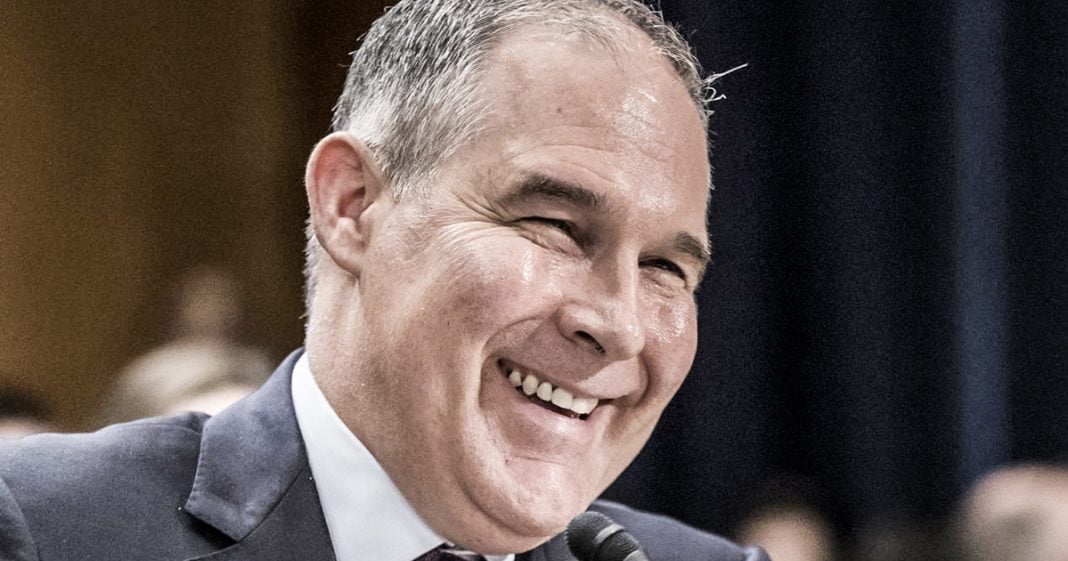 EPA security guards forcibly shoved a female AP reporter out of a meeting on Tuesday after the reporter attempted to enter and ask questions. The agency then barred media outlets from being able to enter the meeting which was convened to discuss water contamination across the United States. This is not how democracy works, as Ring of Fire’s Farron Cousins explains.

On Tuesday, the EPA held a meeting where they talked about the problem of contaminants in drinking water all throughout the United States. We learned last week that the EPA had suppressed a report about how dangerous American drinking water is because they feared the public backlash and thought it would be bad PR. Well as it turns out, what happened at the meeting yesterday was even worse PR for the already embattled agency. They decided to bar reporters from three news organizations, CNN, the AP, and E&E, which is an environmental news organization, and when one AP reporter attempted to go through a security checkpoint, she was forcibly shoved out of that meeting. Security guards for the EPA grabbed her by the shoulders and shoved her out of that meeting so that she could not hear what was being discussed.

Now, the EPA never gave any kind of explanation as to why the AP, CNN, and E&E were the three outlets that were barred from entering and observing what was being discussed in that meeting, but that’s irrelevant at this point. I mean, that’s something we can deal with at another time. What matters is that they forcibly shoved a female reporter out of the room so that she couldn’t hear what was being discussed by the people within the EPA, maybe learning their plans to clean up the water that millions of Americans are drinking every day filled with contaminants.

This EPA has set a new low in terms of behavior. Not only do we have the mini scandals of Scott Pruitt to still deal with, but now we also have the fact that they’re forcibly shoving women out of meetings just because they don’t want the press to understand, or hear, or know what they’re talking about. And, on top of that, we still have all of the very gross and disgusting environmental policies, or should I say environmental rollbacks, coming from this agency, but this maneuver here, forcibly shoving a woman out, this is a new low for the Scott Pruitt EPA.

I mean, Republicans have looked the other way on the scandals. They look the other way on the environmental rollbacks. In fact, they actually champion those, because that’s what they’ve wanted, so it’s going to be interesting to hear what they have to say about this EPA security guard, that Scott Pruitt insists he has around them all the time, about him shoving this woman out of the meeting, and whether or not this woman may end up filing any kind of charges or perhaps a lawsuit against this individual for roughing her up when all she was trying to do was get some answers about the dangerous levels of contaminants in Americans’ drinking waters.