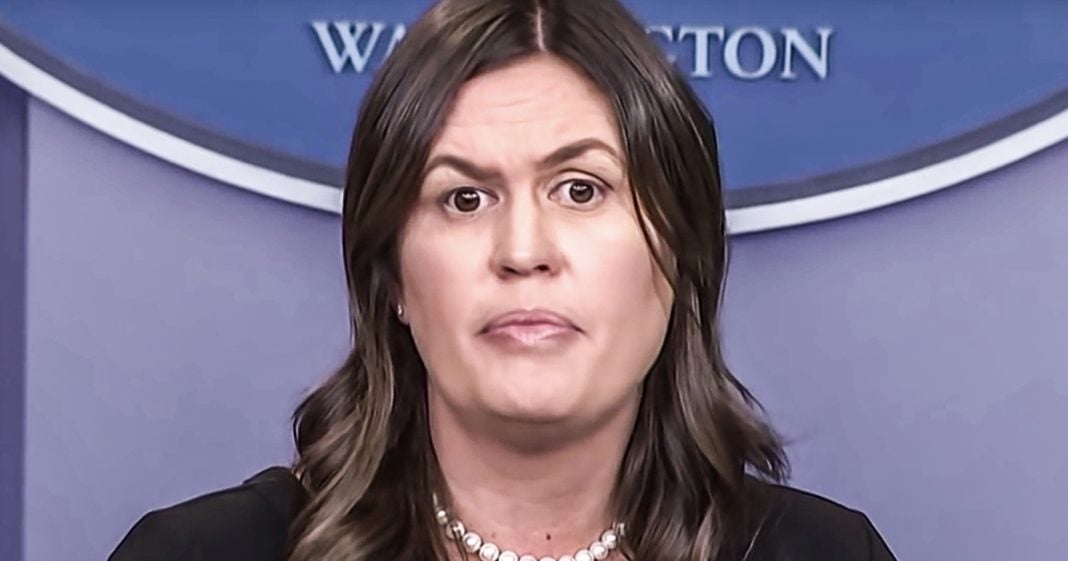 During Tuesday’s White House press briefing, a visibly angry Sarah Huckabee Sanders refused to answer a question from a reporter asking about the incident from earlier in the day when an AP reporter was forcibly shoved out of an EPA meeting by security guards. Sanders claimed that the question was “hypothetical” even though it had been verified by dozens of media outlets. Ring of Fire’s Farron Cousins discusses this.

During Tuesday’s White House press briefing, NBC reporter Hallie Jackson asked Sarah Huckabee Sanders about the incident that took place earlier in the day, where an AP reporter was forcibly shoved out of an EPA meeting because she wanted to ask a few questions. This is how Sarah Huckabee Sanders responded to this female responded getting roughed up by EPA security guards during the press briefing. Take a look.

Hallie Jackson: Sarah, to follow up on Anita and then a question as well to you, is there any situation barring a security incident in which you feel, the White House feels, it is appropriate to physically touch or physically handle-

Sarah Huckabee: I’m not going to weigh in to random hypotheticals that may or may not exist. I don’t know any information about this specific incident. You’re asking me to-

Hallie Jackson: Is it appropriate to touch a reporter-

Sarah Huckabee: No, you’re asking me to speak to a blanket possibility, which I’m not going to do, nor would I ever ask or expect you to do. John?

Hallie Jackson: So my other question was actually on the-

Sarah Huckabee: Sorry, I’m going to do one question at a time today ’cause we got short on time. John, go ahead.

Hallie Jackson: Is it appropriate for the President to make a decision-

Hypothetical? Do you honestly think that this thing didn’t happen? Even Fox News reported on it happening. Other people who were present confirmed it. They verified it. There’s not really any question about this. This isn’t a hypothetical, far off question. You need to address it. That’s part of your job. Sarah Huckabee Sanders hates working at the White House. That’s obvious in her attitude when she comes out every day. And to be honest, I’m sure we all know that coworker, somebody that works in the same building as you, maybe. You see them every day. They just look pissed off, they never have a smile. They’re always grumpy about something, mumbling under their breath.

That’s what Sarah Huckabee Sanders is for the White House press office. She hates it. She’s miserable. She goes out there every day, and that misery is visible in her mannerisms, and it’s audible in the words that she speaks. She was so pissed off at Hallie Jackson for even asking that question, if it’s okay for a security guard to rough up a reporter. And then immediately after that, she went to Newsmax, you know, the hardcore, right-wing, basically a lighter version of Breitbart, because she wanted a friendly question. Maybe she wanted to brighten her day a little bit.

But these are issues that you have to address, Sarah. And if you’re not willing to do it, then I suggest you step off that podium and put someone up there that’s going to do it. The public deserves answers. That’s why your office of communications or whatever, that’s why it exists. To tell the public what’s happening, to give the public answers about things that have happened. And you can’t even handle it because you hate your job so damn much.

Please. For the sake of this country, just go and quit. Quit today. Walk out. Say, “I’m done with this, I hate it, I’m gone.” It won’t take long for Donald Trump to find somebody else. Hell, I’m sure he already has Sean Hannity’s resume in his hand, ready to make that call and say, “Please come be my press secretary.” So you won’t be missed. The public’s not going to miss you, the press isn’t going to miss you. And the president’s not going to miss you. But if you’re not going to stand up there and answer the tough questions that need to be answered, then you need to find a new line of work.