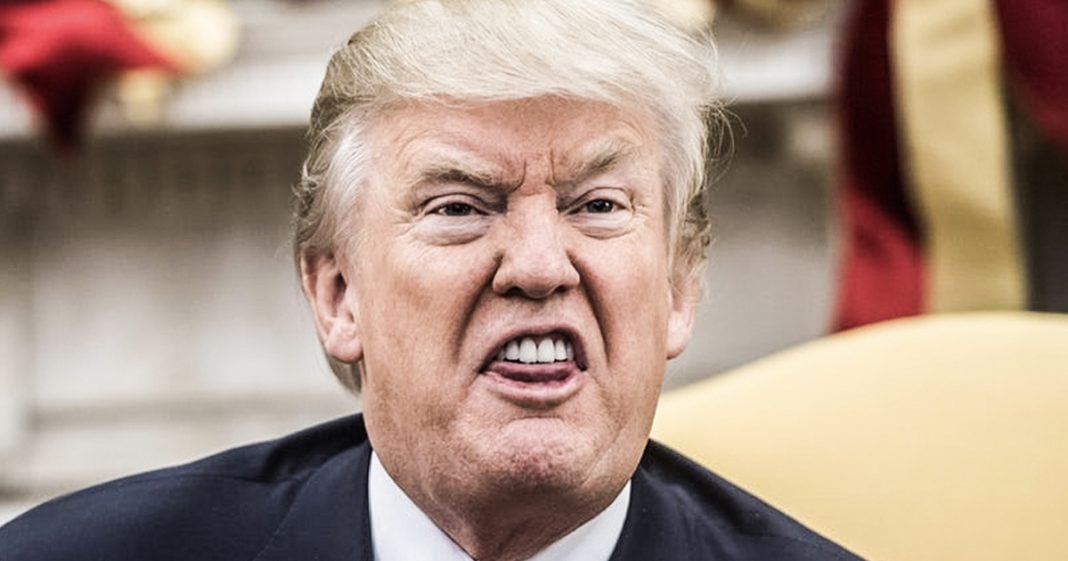 Donald Trump refuses to give up his personal cell phone, and has been conducting official business from his private phone. This phone is not secured and could easily be hacked into, but the President says that using his secured phone is “too inconvenient.” He also enjoys the fact that his Chief of Staff John Kelly can’t monitor who he is talking to, as Ring of Fire’s Farron Cousins explains.

Reports have come out this week showing that Donald Trump is still using a non secured cellphone for a lot of his communications while President Of The United States. It is a White House phone. It’s his personal phone, but it does not have any of the security measures, apparatus or whatever it is in place, so it is a non secured phone.

And the reason that the president insists on using this non-secured phone is because having to go through all of the security would just be, quote, too inconvenient. So instead he uses an easily hackable phone, because it’s more convenient. Now, if I remember correctly, there was a political party … I believe this was back 2015, 2016 sometime in there. There was one political party that actually made an entire campaign out of the fact that their opponent was using non-secured email servers. They ran on that because they were talking about how big of a threat that was to national security.

Now, I can’t imagine why those same people, the Republicans who ran that campaign against Hillary Clinton, are totally cool with the fact that the President Of The United States is using a phone that even the most rudimentary of hackers could get into. But here’s the thing, it’s not just that it’s too inconvenient to go through all the security measures necessary to make sure his phone is secure. One of the real reasons … and this story actually came out a couple months ago … that Donald Trump is using this private cellphone for communications, is because he doesn’t want his chief of staff John Kelly to know who he’s talking to.

He doesn’t want there to be any official presidential record of these communications and John Kelly cannot know about it. Perhaps that’s why he feels free to call Sean Hannity every night before he tucks himself into bed. Maybe that’s why he’s having these phone conversations with other Fox News hosts like Lou Dobbs. Maybe that’s the phone that he tweets from and he doesn’t want anyone else to have access to it so that they could delete that app and save this presidency a lot of embarrassment.

Whatever the reason is, this is a threat to security, just like Hillary’s thing was a threat to security. Nothing bad happened with that that we know of. No hostile forces got a hold of that information that we can tell. But this is The President Of The United States, somebody with a little bit more power, a little bit more clout. We know that there are forces out there, hostile countries, whatever you wanna call them, that have tried to hack into The United States. They’ve hacked into our voting systems. They hacked into the DNC server. What makes you think that they’re not going to hack into your cellphone and listen in on those calls when you’re talking about things that are a matter of national security.

So, I’m sorry if it’s a little too inconvenient for you, but I’m sure it’s going to be even more inconvenient if a country like North Korea or Russia finds out all of your dirty little secrets and then somehow uses them to blackmail you. Because that’s something that could possibly happen just because you don’t want John Kelly to know who you’re talking to.