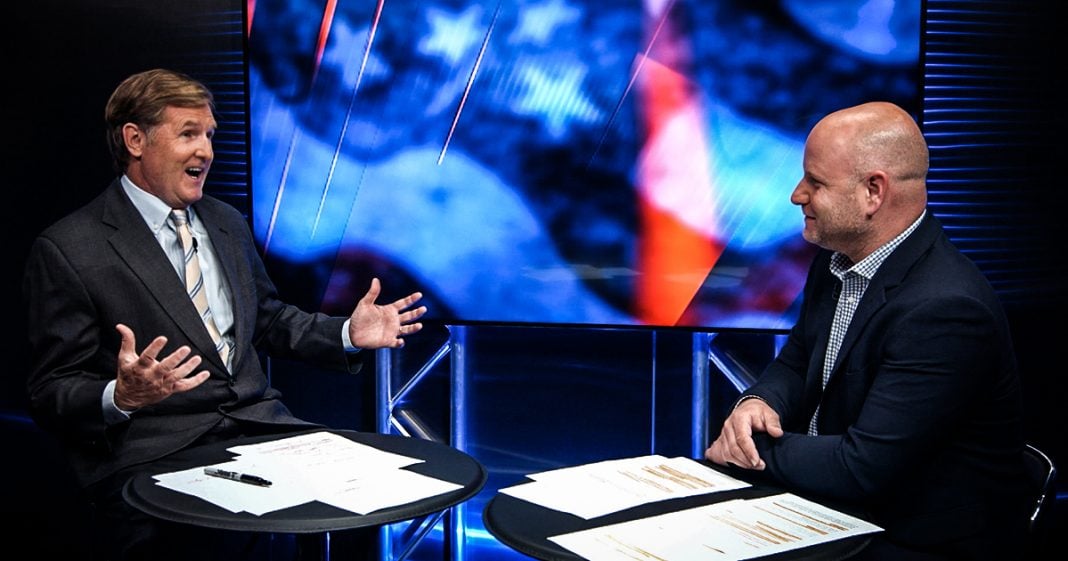 A new study has been released showing that Glyphosate – the main ingredient of Monsanto’s Round Up – is NOT safe, even at the levels that the EPA tells us ARE safe. In fact, there may actually be NO SAFE level of exposure to this toxic chemical. Ring of Fire’s Mike Papantonio and Farron Cousins discuss this.

Mike Papantonio: A new study’s been released showing glyphosate, the main ingredient in Monsanto’s Roundup is not safe, even at levels that the EPA are telling us are safe. In fact, there may be no safe level of exposure to this toxic chemical that makes up most of the herbicide Roundup that’s produced by Monsanto. You know, Farron, the troublesome thing about this development is Monsanto has known this now for decades. As you know, I’ve just finished taking a whole round of depositions in this case but this study’s saying, look, it’s not just cancer that we’re concerned about, where it comes to exposure to Roundup, you know, every 30 minutes it seems like there’s a Roundup commercial with some cat out there spraying Roundup in short sleeves, in shorts where it’s absorbed through the skin. The company knows it’s wrong to do that. Their own in-house scientists said we can’t allow that to go on but we now see that it has to do with geno-toxicity, intestinal bacteria that are causing all types of gastrointestinal issues and sexual dysfunction. I mean, that’s just the short list.

Farron Cousins: It really is and, again, these are at levels that the EPA tells us, totally safe, you have nothing to worry about it if you’re exposed to this level of glyphosate. So these independent researchers came along and said, okay, well we’re going to test it because we know you’re not, Mr. EPA, so we’re going to go and test it. They test it on these lab rats and sure enough, within months, a few months … they notice these problems that had developed and it, basically, it alters the biology of these creatures and it can do the same to humans.

Mike Papantonio: Let me put this in perspective, okay? There’s no question that the toxicologists that worked on this and followed it for years, the toxicologists clearly knew this. They knew that they had not done enough testing, they knew that you certainly can’t go out and tell everybody, hey, this is safe. They had not even done testing to prove whether it’s safe. But you mentioned the EPA, the EPA in this case … I’m going to try this case. I’ll be trying this case in St. Louis and I’m going to try the EPA. For once, we’re going to tell the story about the EPA being part of these types of corporate frauds. As a matter of fact, the CEO of this company, of Monsanto, actually worked with the EPA, was also head of the EPA. You see this transition that takes place between not just the CEO, the people of lower management that move onto the FDA, that has allowed this to happen. The EPA that’s allowed this to happen. The point is, we know that this is a product that will kill people but, nevertheless, the EPA keeps hanging onto the idea, well, it hasn’t been proven.

Well the EPA also knows that the tests that were done, initially, to even get this put on the market, that those tests were fraudulent. They were fraudulent and they were done by the EPA and a toxicologist named, Kushner, who was hired by Monsanto to phony up some data. That was decades ago and this has been on the market killing people ever since.

Farron Cousins: And it’s important to point out too, when we talk about the EPA, it’s not just the Scott Pruitt EPA, this was EPA under Obama, under W., under Clinton, under Bush, Sr., and under Reagan. That’s how long this issue’s been in front of them and just to remind people here, you spent most of the month of April taking depositions in these cases. You know more about this than probably anyone else and one of the things … you gave a fantastic presentation not that long ago, I think, early April, where you talked about the fact that even Monsanto, on the warning labels of these bottles of Roundup, compared to the commercials … the commercial has the guy, short sleeves, wearing shorts, out there spraying it around, all happy …

Farron Cousins: He’s getting rid of the dandelions.

Farron Cousins: But Monsanto says, and the bottle says you’re supposed to essentially be wearing almost a hazmat suit … don’t let it touch your skin because if it touches your skin, this thing is detectable in the blood stream within 30 minutes.

Mike Papantonio: Well not only that, Farron, unfortunately I’m not able to talk about … after seeing the documents, after doing the depositions, and we’ve got more depos coming up, there is zero question … zero question … that Monsanto has known that Roundup has the ability to cause cancer and other physical injuries. There’s no question that Monsanto gamed the system by putting in place people at the EPA, FDA, name it … if it’s a public regulatory entity, Monsanto placed their people in there, and they also understood that what they were telling the American public about Roundup was an absolute lie. Now, I can tell you that, haven taken the depositions, unfortunately, I can’t show you the documents, but I’ve seen the documents, and the documents are overwhelmingly … overwhelmingly, show that this is a corrupt, fraudulent corporation that has allowed this to go on understanding clearly … understanding clearly, that they were killing people all over the globe.

Farron Cousins: Well, you know, we may not be able to show the documents or disclose what’s in those but what we do have is this whole body of independent scientific research, you know, even before this study, about two or three weeks ago, this study came out showing that guess what … the most popular beer and wine brands in the United States are contaminated with Roundup and now we know that it’s not even safe, basically, at any level …

Mike Papantonio: It’s in cereal, it’s in children’s baby formula at levels … First of all there is no safe level. Let me make that clear, there is no safe level. This is a product that builds up in the system, they’d like to say, well, it just moves right through the system. No, it doesn’t move right through the system. They find it in people’s urine that have never even worked around a farm entity. We’re getting this in our food every day. Babies are getting it in their baby formula every day. And the EPA knows this, the government knows it but it’s one of those deals where they think this is such a huge disaster.

It’s kind of like the story that we did yesterday where we’re talking about some disasters are just so big … with Pruitt, with the EPA, Pruitt says, “Well, we can’t tell the public what’s in their drinking water because it’s bad. It’s really bad and if we actually told the public, it would be so bad that we’d have a crisis on our hands.” So, they covered up the study. This is the same kind of deal. This is so big, that it’s in our cereal, it’s in our cookies, it’s in virtually every kind of wheat, rice based food. It’s in beer, it’s in wine, and so now we have this thing that’s completely out of control and the government … under, as you point out, four or five administrations, have had no guts, even though they’ve been told this is clearly a problem. Interestingly enough, while we’re talking about … again, I just call the shots like it is … Democrats have been Monsanto’s biggest ally in making sure that the whole GMO, Roundup ready products are sold all over the globe.