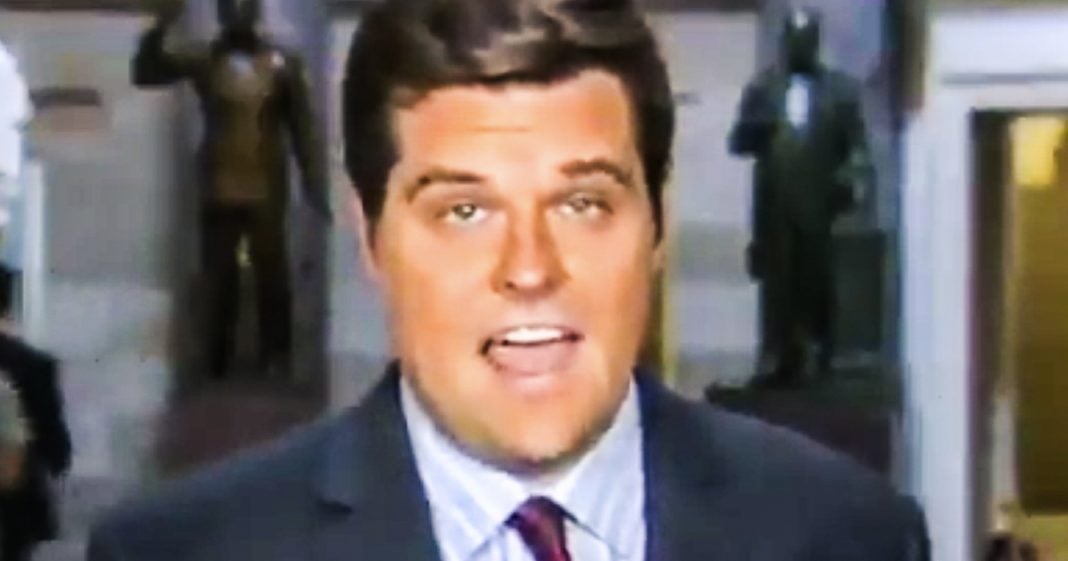 Trump sycophant Matt Gaetz has never been shy about his willingness to say stupid things on national television, but his recent appearance on Fox News really highlights how crazy his beliefs are. During an interview, Gaetz said that Attorney General Jeff Sessions clearly has Stockholm Syndrome with his “captors from the Deep State.” Ring of Fire’s Farron Cousins discusses this.

Republican Congressman Matt Gates loves to let the public know that he is absolutely one of the craziest people serving in the U.S. House of Representatives. During a recent interview on Fox News, Matt Gates decided to talk about Jeff Sessions being basically held captive by the so-called deep state within the U.S. Department of Justice. And it only got crazier from there. Take a look.

Speaker 2:
So, what would you like for the DOJ to do at this point in terms of, if they don’t do this, what’s the alternative? What a Plan B?

Matt Gates:
Well, of course I would like Jeff Sessions to step up and renounce his recusal …

Speaker 2:
Have you talked with him?

Matt Gates:
… and take control of this investigation. Yes, I have and he has said he is totally unwilling to do that. It’s like the … over at the Department of Justice he’s got Stockholm Syndrome, he’s become sympathetic with his captures over there in the deep state and so that …

Speaker 2:
Or maybe it’s because he’s recused himself.

Matt Gates:
Well, yeah but that … the recusal itself is the problem. There’s no legal or factual basis for that recusal to exist, and the consequence of that recusal is that Rob Rosenstein, the very individual who is signing renewals of the FISA warrants, now has the ability to send this latest allegation off to Investigation Land and then use that as a basis to not produce documents to Congress because he can say it’s the subject of an ongoing investigation …

Matt Gates:
… so we need to get out of this cycle, declassify the documents, and expose the deep state for what they have done, in particular, their intelligence collection on President Trump’s campaign.

Okay, there’s two things to talk about with that clip. First, and foremost, and this might be a little off topic but I’m going to say it anyway. I have lived in Florida’s First Congressional District, where Matt Gates is the representative, for basically my entire life minus about two years when I was from ages five to seven. I know what it looks like when you go to the beach and get some sun, get a sunburn and then you tan. You don’t turn the color that Matt Gates is in that video so, Matt Gates has clearly been using some kind of fake tanner, perhaps, to emulate his idol, Donald Trump. But, again, that’s beside the point, just wanted to make sure everybody understood that. That’s not what you look after spending a few days in the sun. But let’s get back to the important issue, right? The deep state, Jeff Sessions and his Stockholm Syndrome to those captures there in the Department of Justice.

What Mr. Gates doesn’t seem to understand is that Jeff Sessions had to recuse himself because he is too close to this investigation. That’s why he’s not getting involved. Might be one of the only good things that Jeff Sessions has ever done in his entire life but, that’s not good enough for Matt Gates. Matt Gates wants Jeff Sessions to basically break his own recusal and come out and end these investigations, expose all of the spies in the agency and then maybe we can clean things up. The only problem is it doesn’t actually exist. Matt Gates, like so many others in the Trump Administration and outside of it, are pushing this conspiracy theory that somehow there were informants embedded into the Trump campaign for the sole purpose of hurting his presidential campaign and yet they didn’t actually do that. Obama didn’t use any information that his alleged informants got, he didn’t turn anything over to Hillary Clinton to expose and the FBI never made a single announcement that they were investigating the Trump campaign. They did, however, announce that they had reopened an investigation into Hillary Clinton.

Nothing about their story adds up, nothing about their story makes any sense but, that’s not going to stop a guy like Matt Gates from going on Fox News and spreading this conspiracy theory that Fox News has helped create. That’s what they do, that’s what Matt Gates does. He’s trying to curry favor with the President. He believes that maybe if enough people in the Administration get fired, maybe he’s going to land one of those jobs and then not have to worry about reelection down here in Florida’s First District where people are becoming increasingly frustrated with having one of the craziest members of Congress representing them.