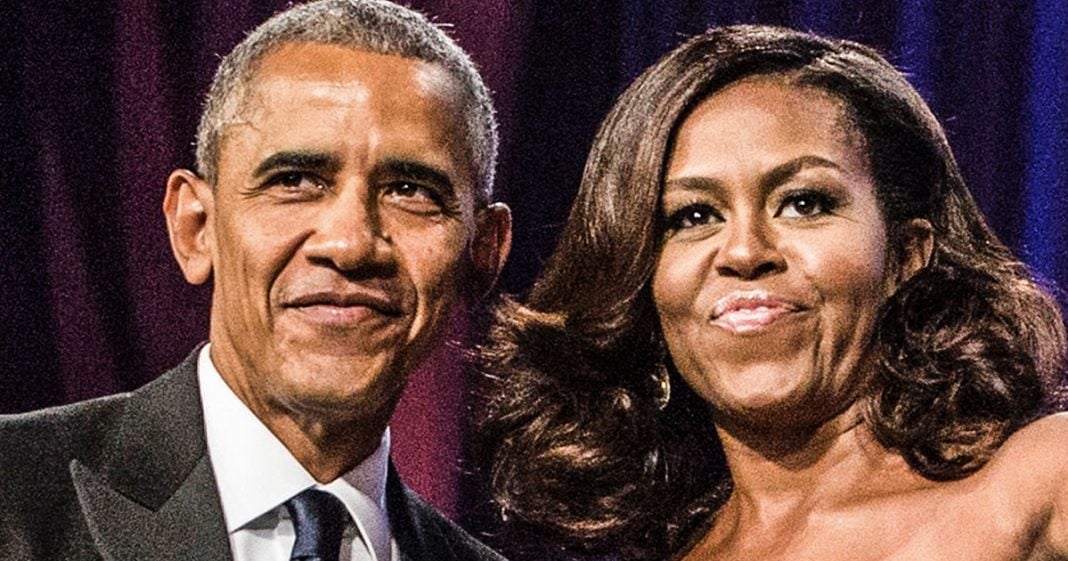 On Monday, Netflix announced that they had reached a deal with Barack and Michelle Obama to produce programming for the digital entertainment company, and conservatives on Twitter promptly lost their collective minds. Between calling the former President names and implying that he’ll need to produce those shows from prison, these conservatives can’t handle the fact that the Obama family is still hanging around. Ring of Fire’s Farron Cousins discusses this.

On Monday, Netflix announced that they had finalized a deal with Barack and Michelle Obama for the Obama family to produce programming for the digital entertainment company. And immediately after making this announcement, Conservatives on Twitter lost their collective minds. Some of the tweets that they sent in response, there were a lot of, “Well, I’m canceling my Netflix now. Not gonna support these people, they’re working with the Obamas.” But some of them got a little bit more creative than that. Here is just a few of them:

“Let me cancel my Netflix subscriptions, apparently they will let anyone on Netflix. More of the same racist clap trap Obama good at.”

“Netflix hiring Obamas make me sick. Will cancel my account if it happens. Why those two disgusting, rassist people?” And racist is spelled with two S’s in that one.

“Cancel at Netflix. This will be nonstop social engineering, cultural Marxist programming and serve as a money laundering front for bribes just like their books are.”

And of course, who can forget this one, “Knowing that the #deepstate and #corruptobamas have found yet another way to indoctrinate the American people by controlling what we watch guarantees my family will #boycottnetflix and cancel our subscription today. We can’t MAGA without some sacrifice and effort.”

Listen, I don’t care if you like Obama. I don’t care if you want to watch their programming. Netflix didn’t say that this was the only thing that’s going to be available on Netflix in the near future, like they’re just getting rid of everything else and it’s only all Obamas all the time. I don’t like the fact that they’ve made deals with Adam Sandler to continue putting out crappy movies on Netflix every year, but I’m not boycotting them or canceling my subscription over it.

These Conservatives don’t seem to understand something that’s really important here. And this is why Netflix made this decision. The Obamas are very smart. The majority of people in this country like the Obamas, especially when you compare them to what we have now in the White House. So you may disagree with his policies, I disagree with a lot of his policies, but that doesn’t mean that he doesn’t have something vital to say or that he and his wife together making these mini documentaries, like they are planning to do, might help to educate an American public that is desperately in need of some kind of education at this point.

The spelling errors, the typos, the conspiracy theories, all of that that we saw in the tweet responses to Netflix’s announcement show that this country needs something more. We need some kind of educational programming. And if it comes from the Obamas, then it comes from the Obamas. Who cares. Sit back, enjoy it. And if you don’t want to watch it, you don’t have to sacrifice your entire entertainment catalog, just don’t click on it. But I guess that concept is a little too difficult for Conservatives to wrap their head around.