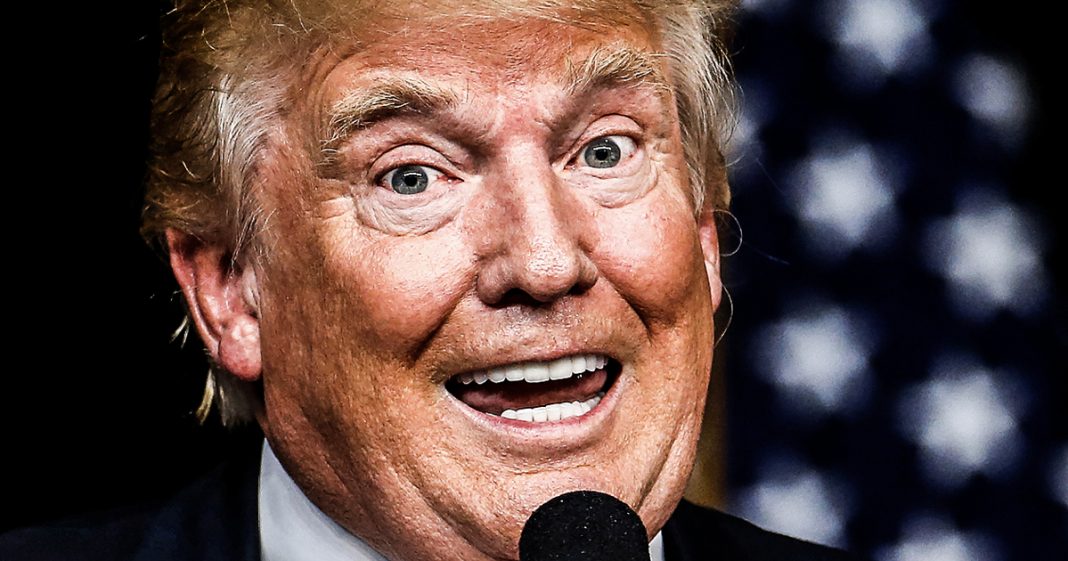 On Sunday, Donald Trump decided to show the world just how crazy he really is with a series of unhinged tweets that culminated in him DEMANDING that the DOJ investigate the Fox News claims that there was an FBI informant in his campaign. But even if they find out that an informant existed, doesn’t that speak more poorly of Trump himself? Ring of Fire’s Farron Cousins discusses this.

On Sunday while watching Fox News, Donald Trump decided to get on Twitter where he had an absolute meltdown, showing the world just how unstable he truly is. All of the tweets he sent out during the day and all of the coverage that he watched on Fox News culminated in this tweet towards the end of the afternoon, “I hereby demand, and will do so officially tomorrow, that the Department of Justice look into whether or not the FBI/DOJ infiltrated or surveilled the Trump Campaign for Political Purposes – and if any such demands or requests were made by people within the Obama Administration!”

For the last few days we’ve had people, including Trump’s lawyer Rudy Giuliani, go on Fox News and make the unsubstantiated claim that the FBI had some kind of informant inside of the Donald Trump Campaign who is reporting back to the FBI. Here’s the thing, if they had somebody like this in there, it’s not because they wanted to do it for political purposes. It’s because they suspected members of the Trump Campaign could be committing crimes or were connected to some kind of organized criminal activity. We already know that several people within the Trump Campaign had been on the FBI’s radar years before Donald Trump even considered running for president in 2016.

Yes, to be honest, totally seems like something that the FBI would want to keep tabs on if these people were close to somebody who was close to becoming the President of the United States, but the president does not have the authority to order the DOJ to do anything. Unfortunately, Deputy Attorney General Rod Rosenstein has already. He said, “Okay. Yeah, fine. We’re going to look into his this.” He caved to Donald Trump, which is actually not what Donald Trump wanted. Donald Trump wanted Rosenstein to deny his request to look into this issue so that he would have clearance to fire Rosenstein which could then lead to the firing of Robert Mueller.

The reason all of this even came about, the reason Donald Trump was having his meltdown, was because of The New York Times story from Saturday that showed that Trump Jr. met with an emissary from the Middle East where they offered help so that Donald Trump could win the 2016 election. Mueller knows that. He’s already interviewed all the people involved in it. He’s got the information that he needs. Fox News decided to be their loyal little Trump apologist, ignored that story completely, and the president had already tweeted out that it was totally false and The New York Times is failing. They instead wanted to talk about Hillary Clinton.

They wanted to talk about this possibly imaginary FBI informant embedded in the Trump Campaign, and they wanted to go back to talking about Obama doing all of this to I guess stick it to Donald Trump. Here’s some of the other tweets that Donald Trump sent out. “At what point does this soon to be $20,000,000 Witch Hunt, composed of 13 Angry and Heavily Conflicted Democrats and two people who have worked for Obama for 8 years, STOP! They have found no Collusion with Russia, No Obstruction, but they aren’t looking at the corruption.” Now first of all, just a few days ago, he actually said it was going to be close to $10 million investigation.

Suddenly in the last like two or three days, it doubled in cost. I don’t know what happened there, but I’m sure the Trump supporters are too stupid to know that he changed the number on you without you even noticing. Furthermore, no, it’s not comprised of Democrats. You’re just flat out lying about that. Again though, your base doesn’t care about it. They found no collusion with Russia. How do you know? Really? At what point did they go ahead and hand over all of their findings to you? Because last I heard, they hadn’t done that, so how in the world do you know what they have or have not found? Stop lying. The tweets are endless here.

“What ever happened to the Server, at the center of so much Corruption, that the Democratic National Committee REFUSED to hand over to the hard charging FBI? They broke into homes & offices early in the morning, but were afraid to take the Server?” You know what? If you want the FBI to keep looking into that, if you want them to keep going after it, at this point, honest to God, I don’t even care. I think a lot of people in this country don’t even care. Investigate it. Don’t investigate it. Just shut the hell up about it and do it. If you think the DNC destroyed evidence, which if it happened, yeah, that’s criminal activity, do something.

If the FBI thought they had done that, they would have done something about it. They investigated the matter. They looked into these people. They didn’t find any criminal wrongdoing to the point where they could prosecute somebody. Move on. That’s the top law enforcement agency in the country. It’s not like the local police went in there, screwed up the scene, and then “oh, we just had to let it go.” No. You had professionals doing it. It’s time to drop that issue. Everything that the president sent out this weekend and he continues to do it here on Monday shows that this is a man who is absolutely terrified about what is happening.

He is becoming increasingly paranoid and unhinge about this entire investigation and everything that it involves. He’s freaking out. He’s lashing out. He’s tuning into Fox News which is the last refuge that he has. He’s live tweeting the insane conspiracy theories that they are spewing out on a daily basis, and now he’s forcing the FBI to go investigate them just because he heard it on Fox News. This is why it’s so dangerous that the president is so deeply embedded with Fox News. They can say whatever the hell they want on the air. They don’t have to justify it. They don’t have to substantiate it.

They don’t have to back it up with any kind of facts and figures or statistics at all. They say it. The president will automatically believe it, and then he’ll force the government to go on a wild goose chase to try to verify it. That’s the way 2018 is going so far and to be honest, I don’t see any of that changing until maybe we get the results of this Mueller investigation and find out whether or not this man actually committed a crime and then hopefully we can remove him from office.