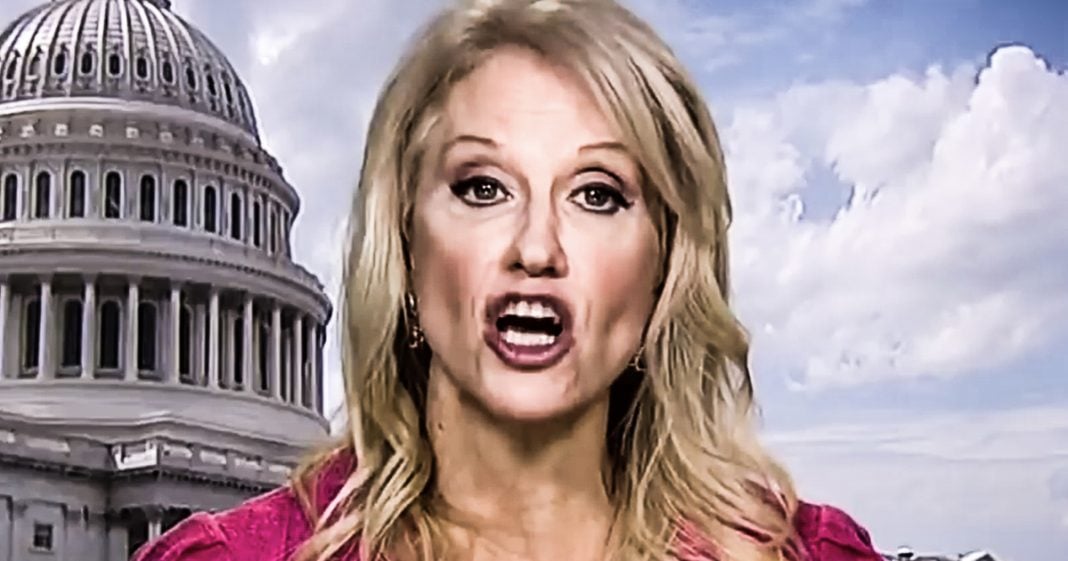 Kellyanne Conway gave another bizarre interview on CNN this past weekend. When asked about Sean Hannity’s relationship with the President, Conway denied that there’s any kind of advising going on between the two, but she also decided to heap praise on Hannity as a voice of reason who offers “unique content” that Americans are hungry for. Ring of Fire’s Farron Cousins discusses this.

This past weekend, Kellyanne Conway counselor to the President of the United States, decided to go on Reliable Sources on CNN to talk about what’s happening in the Trump administration. The host of Reliable Sources, Brian Stelter actually asked Kellyanne Conway a good question. He asked about all the stories in the past week, showing that Sean Hannity and Donald Trump were literally bed buddies on the telephone, talking every night before President goes to bed, that Sean Hannity had basically become a shadow advisor to the President. Kellyanne Conway used her time on CNN to actually defend a Fox News host, and as she often does, cleverly shifted the subject into something a little more familiar for her. Take a look.

Brian Stelter: There were these stories recently about Sean Hannity as a shadow chief of staff or shadow Comms Director. I was wondering if you and Hannity ever coordinate? Can you tell us about that?

Kellyanne C.: I don’t coordinate with Sean Hannity. We’re both pretty busy people. I go on the show once a week or every couple weeks. I saw Sarah Sanders was on there the other night. I’ve known Sean for a very long time, but there’s nothing to coordinate. Why would we need to coordinate? What is there to coordinate? I have a relationship with the President. I speak with him regularly. Sean is running the highest rated show on cable and I think there’s a reason for that. He’s providing information that people can’t find anywhere else. Sean would have low ratings if he was talking about everything else everybody’s talking about. Think about that for a moment. People are starved for unique content and they seem to not be getting it elsewhere.

His ratings show that and what he covers every night show that. He’s also dealing with things that are outside of my purview, for example congressional investigations. I don’t have access to those materials. I’m glad the country’s starting to have access to those materials, Brian, because I think when everybody’s calling for transparency and accountability, it ought to cut every single way and we ought to know the way the other investigation of the person who lost the election and you weren’t expecting to, how that investigation was handled. We’re learning more about that now and it is relevant. Even though she lost, it is relevant because it talks about upper echelons of the FBI and what was going on.

We ought to know. If you’re going to give Jim Comey all this book time …

Brian Stelter: We should know who committed crimes, yes.

Kellyanne C.: We should know that.

Brian Stelter: We should know who committed crimes that includes in any campaign.

All right. There’s several things to unpack from this clip. First and foremost, unique content. That is what Sean Hannity is offering and that is why people tune in to him because he has unique content. There’s nothing unique about lying. Hell, there’s nothing unique about lying to a national audience on Fox News. That’s what 99% of the people on that network do on a daily basis. That’s not unique. That’s their agenda. That’s their platform. That’s the mantra of that entire network. To be honest, Kellyanne, the reason Sean Hannity has such good ratings right now, which I think the last quarter dataset that came out, Rachel Maddow was actually doing a little better than was, but nonetheless.

A lot of people tune in to see what kind of train wreck this man is going to have on the air that night, to see how he’s going to twist logic and reality in order to defend Donald Trump. Let’s go the second part real quick. Let’s talk about that fact that you immediately went from defending Sean Hannity to talking about Hillary Clinton. Is that the only trick you know? Is that the only thing you’re capable of talking about? You just sit in the White House all day long thinking how you can change any topic into Hillary Clinton and Democrats because that really seems like that’s the only thing you do in the media. If all you can do is bash a woman who lost an election, then maybe you’re in the wrong industry, maybe you shouldn’t be working for the Trump White House, maybe you should stop going on TV and maybe the network should stop calling her.