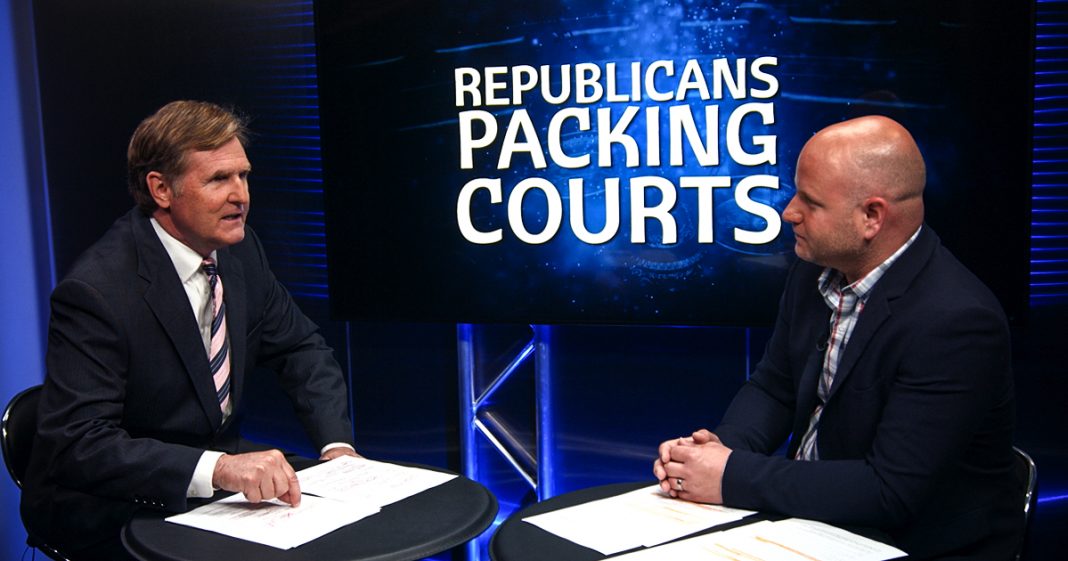 Last week, Democrats on the Senate Judiciary Committee released a report saying that President Donald Trump and Republicans are trying to reshape the federal judiciary by appointing judges whose only qualifications are nonexistent. Ring of Fire’s Mike Papantonio and Farron Cousins discuss this.

Mike Papantonio: Last week, Democrats on the Senate Judiciary Committee released a report saying that President Donald Trump and Republicans are trying to reshape the Federal Judiciary by appointing judges whose only qualifications are, well, non-existent pretty much.

As you look at this story, there’s so many sides to this story. First of all, anybody watching this that is familiar with what Obama’s appointments looked like, you got to kind of begin there before you pile on completely with Republicans. Obama had, what, he had two years to make appointments, and I think he had something like 54 vacancies that they just, well, they were in la-la land for two years. And the reason that I’m so offended by that is because some of the lawyers that were kind of trying to advise Obama were telling him two things. First of all, get busy because Republicans just like Bush got busy where it came to appointments. Second of all, the appointments that Obama made were like these silk stocking, corporate lawyers who had never done anything except represented corporations. And now I’m appearing in front of those Democratic appointment, silk stocking, Covington, Burling, Jones Day judges, and they are awful.

So let me tell you, there’s two sides to this story. But the most obvious thing about this story is it’s very apparent that the Republicans are going out of their way to appoint young, wholly unqualified judges who just have one thing in common, they’re conservative. Their politics are wholly conservative, and those are the appointments that the Republicans are trying to rush through. What’s your take on this?

Farron Cousins: Well, I think what the Democrats missed in their report that they released … I think it was over 100 pages. They never once talked about the fact that Republicans understand the courts better than the Democrats do because to me that is the story. Obama came in office, as you said, 54 judicial appointments wide open. In two years, with Democrats in control of the House and Senate, you could have done anything and everything. He left office 112 vacancies, and that includes that Supreme Court vacancy. And people always want to say, well, what about the obstruction? What about the filibustering? Recess appointments, you could have done that at any time when they took their August break, when they’re gone longer than four days.

Mike Papantonio: Bush did it. Clinton even did it.

Mike Papantonio: Well, look, the other side of this … God, there’s so many sides to this, really. This story is infuriating on so many levels, but Brett Talley, I remember the Brett Talley from Alabama. Now, this is a classic kind of republican appointee. This is a guy who was wholly owned by the NRA, made no bones about it, made it clear he’s gonna rule for the NRA regardless of what the facts are. Second part of it, he was an apologist for the Ku Klux Klan. Now, that’s pretty evident. That’s right up in your face. But your point, the point I’m trying to make, too, is Democrats are just as bad because they don’t understand the system.

Obama, when he was making all these appointments … Look, friend of mine, Howard Nations, one of the true leading trial lawyers in this country, confronted Obama about this and said, “Do you realize the people that you’re appointing are corporate thugs that have come from the corporate industry. They represent corporations. They’ve never represented individuals.” And Obama’s reaction was, “Oh, my god, what’s the problem with that? Aren’t they gonna become fair when they become judges?” Well, no, Mr. Obama. They’re not gonna become fair. Nothing changes. They’re represented corporations. These are the people I’m having to appear in front of, and they are just as bad or worse than Republican appointees.

But the difference is, you look at these Republican appointees, Feinstein’s out there making … She’s leading this charge about how bad the … Look at what Feinstein did where it came to Democrats appointing Democrat judges. I mean, she was just as bad as everybody else, which is the point, Democrats don’t understand. It’s like they never understood how important judicial appointees are. They can change politics.

Farron Cousins: Well, and the Democrats, they’re upset not because these are corporate appointed judges or people who, as the American Bar Association says, are not qualified. It’s because they battle social issues because that’s only thing that mattered during Obama’s appointments-

Farron Cousins: … was where do you stand on same-sex marriage? How are you on issues of affecting minorities? Oh, well, you think banks should have no rules, that’s okay, as long as we can throw the base a few bones saying, “But your good on social issues.”

Mike Papantonio: That is-

Mike Papantonio: Farron, you’ve written half a dozen articles on this as editor of the Trial Lawyer Magazine, and I live it every day. They’re Democrat appointment, as you point out, they’re good on things like gender and race and stuff like … But where it comes to money, it comes to where corporation committing fraud, it comes to where corporation polluting an entire ecosystem, they are just as bad as Republicans because they come from these silk stocking defense firms that have never … They have nothing in common with the average American consumer.

Farron Cousins: But what’s really interesting, too, when we talk about Obama … And I know that we’re supposed to be talking about Republicans, but you can’t unless you address this. One of the judges Obama picked, he came from a corporate defense firm. You and I had done a segment on this guy when he got picked, educating people about how horrible he was. People got mad, and then before Obama left office, he instituted that overtime rule from the Labor Department. That very judge that he appointed overturned it and basically denied overtime to millions of American Workers.

Farron Cousins: And Obama got screwed over by his own appointment because he didn’t do any research.

Mike Papantonio: Look, we can both agree the appointments being made by these Republicans are horrendous.

Mike Papantonio: I mean, you’ve got people that … We all remember the hearing where the judge says, “Well, have you actually appeared…” They asked him, “Have you actually appeared in a courtroom for a hearing?” “No.” “Have you ever tried a case?” “No.” “Do you know what the Daubert Ruling is?” “No.” “Do you understand basic issues about how to try a case?” This person had no idea what the basic issues were. And here’s the bad news, most of the people that are coming forward through the Federalist Society, that by the way was started by Antonin Scalia. And what he tried to do was gather up these judges who call them strict constructionists, who wanted to look at the Constitution as if it doesn’t breathe, as if it doesn’t change. These are the people … The Federalist Society are the people bringing in these nutcases for the Republicans, and in the process, they’re hurting the Federalists. I mean, the Federalist Society is widely known as a joke now just after these last few appointments.