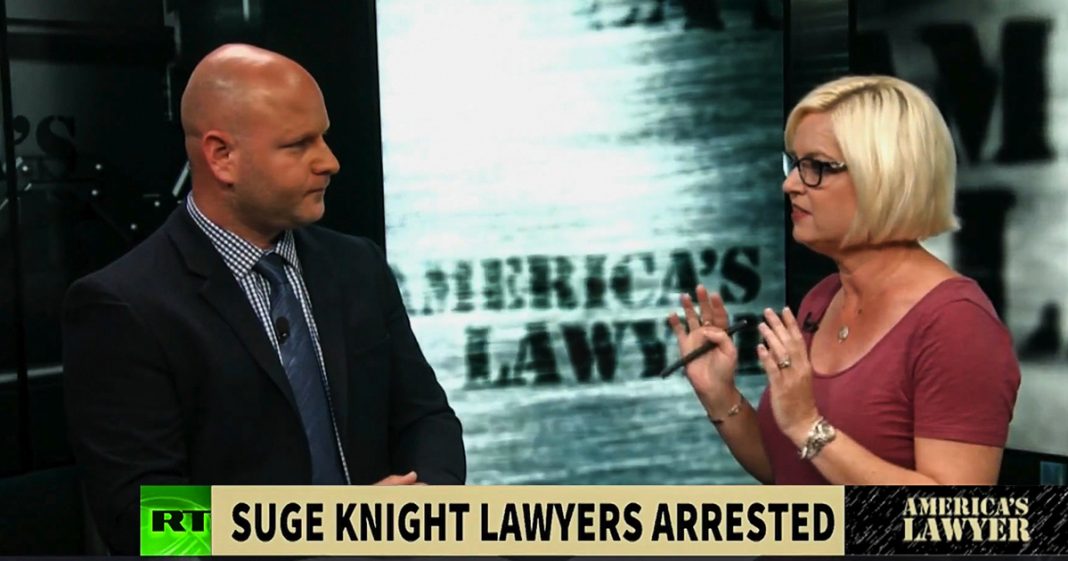 Via America’s Lawyer: Farron Cousins is joined by Mollye Barrows to discuss Suge Knight’s murder trial and charges against his lawyers for trying to bribe witnesses.

Farron Cousins: Two ex lawyers for death row records notorious executive Suge Knight, were indicted for attempting to bribe witnesses. Authorities say the attorneys wanted the witnesses to give money in exchange for positive testimony for Suge Knight’s upcoming murder trial. Joining me now to talk about this is Mollye Barrows, legal journalist of the Trial Lawyer magazine. So Mollye, let’s talk about the murder charges first. Give us a little bit of context on that, on why Suge Knight’s even going to trial here.

Mollye Barrows: Yes, well there is so much drama around this case in general, it just continues to unfold. The original incident that sparked all of this drama was indeed the murder, January 29, 2015. The parking lot of a hamburger stand in Los Angeles, in Compton, not far from where they were shooting a promotional video for Straight Outta Compton. So, Suge Knight not allowed on set, not happy about it. He has a friend there, a guy named Terry Carter who is related to, not related like a family member, but basically related to the production. He’s trying to talk to Suge Knight, and apparently they were having this discussion in each others vehicles. They’re in their own vehicles in this parking lot when Sloan, who is a security guy, Cle Sloan, he also is affiliated. Had affiliations with gang members, and also in the rap business.

He’s working security for the shoot that day. They break for lunch at this hamburger stand. He comes up, and starts giving Suge Knight a hard time, according to the surveillance camera video. They’re arguing. Supposedly you can see them, but then Sloan just starts punching him through the truck. About that time, Suge Knight backs it on up, and then plows straight for him, according to the video. Now, when you talk to both of them, they’ve each had different versions of what you see. The prosecution’s saying Suge Knight did it on purpose. Suge Knight’s saying, “No, I did it in self defense. I was the one under attack.”

There’s some implication that he may or may not have seen a weapon. That’s where, the attorneys that are being charged in this case, that’s where they come in, and the nature of some of the accusations against them, why they got indicted. So, these guys, you’re talking about Thaddeus Culpeppe, who is still an attorney for Suge Knight, because why would you want to give up on an attorney who’s so willing to go so far for you? And then, Matthew Fletcher, who no longer works for the rap mogul. Basically, Fletcher, they’re both charged with conspiracy to commit subordination of perjury, conspiracy to commit obstruction justice, and an accessory after the fact.

Those are all the official terms. They’re basically trying to bribe witnesses, including Cle Sloan, who by the way now says, “You know, I’m not trying to tell on a man. I don’t really want to give up on him. I’m not trying to be a snitch.” Is the word that he used. So, who’s to say whether they actually got to him or not? This was all in this newly unsealed indictment. Apparently he was offering, he told Suge Knight, Fletcher did, right after his arrest, “Hey, for 20 to 25 grand, we can pay off enough witnesses, that we should be able to get you off these charges.” The same with Culpeppe. Similar type accusations. Arranging for confidential informants to basically say favorable testimony on behalf of Suge Knight.

Farron Cousins: This is the level of incompetence among lawyers, that we typically hold for the Trump administrations lawyers. What we’ve seen the most out there.

Farron Cousins: But the families of the man that was killed, they say that NBC Universal should be held responsible as well. Why is NBC being tied into this?

Mollye Barrows: Because they basically had the shoot going on that day, and so the widow of the man who was killed, Terry Carter, his widow Lillian Carter has filed a wrongful death lawsuit against not only Suge Knight, but also NBC Universal Studios, Dr. Dre, and Ice Cube. Those two rappers were there that day. There’s been a longstanding feud, if you will. There are so many feuds. You can get down the rabbit hole family tree of feuds with these guys. But apparently, Dre and Knight have been feuding for years, and that’s the basis for this lawsuit, is that NBC didn’t do enough to provide adequate supervision, and security, especially knowing that there was this feud between Dre and Suge Knight for years.

They shot it right there in Compton, which is where Suge Knight continues to stay, and be a part of that community. It’s been interesting all the way around. I think the trial’s now set for September. These guys have both pleaded not guilty. The attorneys that are charged for their role in this, and they say it’s just the police trying to make a case against them, which of course, they were making Straight Outta Compton, which was about N.W.A., famous for many of their anti-law enforcement songs.

Farron Cousins: Well Mollye, thank you very much for telling us this story.